This postcard provides a view of Lower Wyndham St. looking from the southwest corner of Wyndham and Macdonell towards the northeast corner. It seems to have been taken from a fourth-floor location, which is interesting because the fourth floor of the Day's Block along Wyndham St. does not reach Macdonell, where the camera appears to have been placed. Either the photo was taken a little to the south, from a window in the King Edward Hotel of the time or, more daringly, it was taken from the roof of the three-story structure at the intersection. 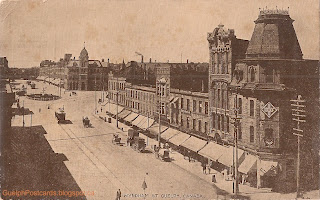 Like the postcard of Park Avenue discussed here, this card was printed in Canada for C. Anderson and Co., Guelph, by Warwick Bro's & Rutter of Toronto. Charles Anderson had a book, stationary, china and fancy goods store at 53 Wyndham St. That would be in St. George's Square, up Wyndham St. and just around the corner (and out of view) on the right-hand (east) side in the photo. The photo must have been taken after the old Post Office in the Square got its third floor in 1903 but before the Square was renovated in 1908. So, let's say ca. 1905.

There are many things to enjoy about this photo. The level horizon of rooftops at eye height provides an interesting contrast with the strong diagonal of Wyndham St. below. The eagle-eye view also provides an element of voyeurism, as the viewer spies on the doings of folk in the streets, going about their business unaware of the viewer's gaze. The street is busy with a mixture of streetcars, horse-drawn conveyances, and people on foot, as was typical of the time. A couple of oddities are also visible: there appears to be some kind of cone on a post in the middle at the bottom, while a blurry horse and wagon appear in the lower-right corner, going too fast for the camera to capture clearly.

The photo also has a pleasant, warm sepia tone, although it is actually a halftone picture that has yellowed with age.

Compare the vantage provided by the rooftop with the view from below via Street View:


The Petrie Building, designed by Guelph architect John Day, was completed in 1882 for Alexander Bain Petrie. Petrie was a local pharmacist and manufacturer, and one of the City's most successful and influential businessmen. Four-storeys high and constructed of stone and timber, it is one of a very few buildings remaining in Canada incorporating a stamped galvanized iron façade. This was a popular building technology of the late 1800s and was used as a substitute for wood, stone or cast iron. There are only three documented buildings in the country erected prior to 1890 with full sheet-metal facades, the other two being Victoria Hall in Hamilton and the Empire Hotel in Winnipeg. The galvanized iron facade was manufactured for Petrie by the Ohio firm of Bakewell and Mullins, specialists in architectural sheet metal working. Stylishly ornamented and elaborately embellished, the facade is distinguished by a bold cornice with a broken pediment framing a large mortar and pestle, a reminder of the building's original function as a pharmacy.


At the time, the Petrie Building's address was 15 Wyndham St., although it now has the address 53 Wyndham (the former address Anderson's store, where this postcard was sold, by coincidence).

Alexander Bains Petrie (1843–1921) was certainly a prominent member of the community and very active in community life. The obituary in the Guelph Evening Mercury (Sept. 24, on the front page) notes that he began his career by establishing a drug store in 1869 at the corner of Carden and Wyndham streets. He moved this to the "Petrie building" upon its completion in 1882. Besides its unusual facade, the building harbours some oddities of organization, such as a secret passage to its neighbour.

Robert Stewart provides a snapshot of Petrie's pharmaceutical business from an article in a Guelph newspaper from 1894 (1976, p. 147). The article lauds Petrie's building and his wares, of which it lists the following:


Quite a collection! One can only hope that the various preparations did not get confused.

Petrie was also the founder of the Petrie Manufacturing Co., of Galt, Guelph, and Hamilton. In addition, he was the owner and founder of the Masonic block on Upper Wyndham, and the factory opposite the train station on Carden St. As you might have guessed, he was a Mason, and a founder of the Guelph and Ontario Investment and Savings Society, of which he was president for about 20 years. He was also a councillor in the South Ward (1874–1876) and an alderman for the later St. George's Ward (1897, 1901).

Wait, the indefatigable Petrie was not done yet! In 1894, he was a founder of the Guelph Road Race Association and, in 1898, built the Petrie Athletic Park on Gordon St., around where the current Guelph Lawn Bowling Club now stands by the Speed River. The facilities of the Park were impressive:


The provincial cycle races were held there in 1899, and the park soon featured a large range of events, skating carnivals, ice-shows and hockey games. It also offered an indoor bathing pool, gymnasium, tennis courts and a bowling green. On the night of February 28, 1900, the gymnasium was converted into an elegant ballroom for the assembly of the Victoria-OAC Hockey club. Thain’s orchestra played on the encircling balcony, and, after a break at midnight when the 175 invited guests served supper, continued until two in the morning. (p. 18)

Since Petrie's death, the Petrie Building has passed through several hands, and it is currently owned by Agelakos family, who operate the Apollo 11 restaurant on the ground floor. As you can see from the Street View picture, the upper floors have sunk into decrepitude. However, a group called "Save the Petrie Building", led by local archaeologist David Knight, has been formed to try to have the building preserved and perhaps restored. The group has been featured in a Facebook Stories article, with a pointer to their Facebook page. Recently, the group also staged an art exhibit about the building to help raise public awareness.

Given his energy as a public figure in the city, I am sure that Petrie himself would appreciate the effort.

Posted by Cameron Shelley at 13:47