Easter has traditionally been an important time of year in Guelph, both for religious and secular reasons. Part of its significance is that it marks the change of seasons from winter to spring. Appropriately, people often chose to get in touch with one another at this time, perhaps hoping to get together. Postcard makers issued special cards with Easter motifs to help people honor the occasion.

The card below exemplifies this tradition. It features a drawing of a cute little girl feeding a couple of bunnies with a special dropper, with the message "A Happy Easter" to make the intent completely clear. The logo in the lower-left corner identifies the printer as the Stecher Lithographic Company of Rochester, New York. 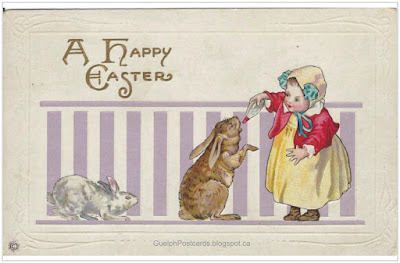 Writing on the back identifies the addressee as Miss Grace Benham of Rockwood. The message is of the typical how-are-you sort:


Dear Grace: How is all the folks at your place. hoping every one is fine. I wish you & George will come in some Saturday & spend the day. wishing you all a happy Easter. from Agnes Bennett


The cancellation mark is from Guelph on 3 April 1920. Unfortunately, there is no listing for Agnes Bennett in the contemporary Guelph city directory, so it is unclear who she is.

Easter 1920 must have been especially significant for Guelphites. The trauma of the Great War was still present but people clearly hoped for better in the coming decade.

One continuing difficulty regarding the Great War was how to put it in perspective. For its part, the Ontario Agricultural College began a funding drive to raise $100,000 to construct a building to memorialize Canadian soldiers who fought and died in the conflict (Mercury, 6 Jan.). The result was the War Memorial Hall built on the campus in 1924. The Hall commemorates Canadians who lost their lives in both World Wars. However, it is often used for happier events, including conferences and convocation.

An unpleasant reminder of the war came as a recurrence of the Spanish flu that first appeared in 1918. The strain was infamous for its lethality and the fact that it seemed especially dangerous for young and healthy people. One article in the Mercury (3 Feb.) remarked on the number of young and well-known Guelphites who had been carried off in only the previous 24 hours. These included Walter Iveson, Mrs. Frank O'Drowsky, Emma Reinhart (daughter of Rudolf and Lena Reinhart, owners of the Fountain House hotel), William McArthur, Mamie Olive Guild of Rockwood, Douglas Pettipiece, Alice Kelly, and Lavelle Germain. The latter was a Great War veteran who was in Guelph to take a vocational course at the Speedwell Hospital. Some of the things Germain had welded during his training were exhibited to the Prince of Wales on his visit to the Royal City in the previous year. Germain, who was staying at the King Edward Hotel, complained one evening that he felt unwell and asked to see a doctor. The doctor arrived to find the man only a few hours away from death.

In addition, Guelphites read with alarm stories in the Mercury about current events in Europe. In Germany, for example, the Versailles Treaty came into effect. The new Weimar Republic, which had replaced the German Empire, was required to demobilize large parts of its armed forces. Rather than submit, German marines staged a coup under Wolfgang Kapp. On 13 March, marines marched into Berlin, ominously bearing swastikas emblazoned on their helmets. The German military was largely in favor of the so-called Kapp Putsch and the Republican government fled the city.

However, resistance to the coup arose in the form of a national strike led by German labor unions. Millions of Germans left work and protested in the streets, effectively paralyzing the country. Finding their situation untenable, Kapp and the generals resigned and left Berlin and, ultimately, the country.

Feeling that their time had come, socialist and communist strikers in the German industrial heartland of the Ruhr turned their resistance into a coup of their own. The so-called Ruhr Uprising attempted to install a "dictatorship of the proletariat", supported by the self-organized Red Ruhr Army. In April, the uprising was brutally suppressed by the German army and paramilitary forces. As the presence of the German army was against the Versailles Treaty, French and British forces occupied several western German cities. Happily, German troops backed off and no shots were fired between them.

The situation in Eastern Europe was even more chaotic. Nationalist and communist forces fought for control of territories in the former Austrian and Russian empires. Guelphites were likely concerned about the advances of the Soviet Red Army against the White Russian forces in the Ukraine during the Russian Civil War and were glad that the Canadian Siberian Expeditionary Force had returned from Vladivostok the previous year.

However, the international news was not all grim. For example, the League of Nations was brought into being on 16 January 1920 as a part of the Versailles Treaty. The League consisted of a General Assembly, a Council of the great powers, a Permanent Court of Justice, and the International Labor Organization (which still exists). One of the main aims of the League was to establish an effective alternative to warfare in international relations, in the hope of preventing another world conflict. Over the years, it met with some success in resolving border disputes but, of course, failed to prevent the occurrence of a second World War.

Locally, Guelph was still finding its way to a new normal for peacetime. In his inaugural speech to the City Council, Mayor Henry Westoby described his plans for the Royal City in 1920 (Mercury, 20 Jan.). They included renovation of the water supply system and storm sewers, renewed street paving to smooth the path for the city's increasing population of cars, support for the proposal to allow the Ontario Hydro utility to take over the city's streetcar system (accomplished in 1922), adoption of Daylight Saving Time, and construction of a public swimming pool.

Although no pool was built that year, a new ice rink was opened on 7 February (Mercury, 9 Feb.). The rink stood at the corner of Cambridge (now Commercial) Street and Norfolk, where the Royal Plaza now stands. Over a thousand people lined up to enjoy the opening ceremonies and events, which were filmed for a "moving picture" show. The opening event was a game between two teams of women's "hockeyists", one from the Guelph Collegiate Institute and the other from "White's," perhaps referring the Colonial Whitewear Company on Northumberland Street, which had many female employees. The reporter praised the teams for their vigorous play, which included many "stiff" bodychecks. The crowd was also amused at how the women, who were used to playing broom ball, handled their hockey sticks. The game was very competitive and the final result, after two periods of play, was a 3–1 victory for the GCI girls.

The women's game was followed by two matches between men's teams. In the first game, a team from the Guelph Carpet Mills Co. on Neeve Street played to a 0–0 tie with a team from the Partridge Rubber Co. on Clark Street (now Ferguson). In the second match, a junior all-star team from Toronto edged a junior all-star team from Guelph by a score of 6–5. The Mercury reporter thought that the events of the new arena's first evening augured a bright future for the facility.

The Priory, the first building constructed in the city, continued to fall into disrepair after it had been decommissioned as the city's C.P.R. train station in 1911. During a visit to the Royal City, eminent horticulturalist Dr. F.C. Bennett (any relation to Agnes Bennett?) was shocked to discover that such a historic structure had been left to fall into ruin (4 March):


Mr. Bennett was astonished to think that such a land mark of the city was being left to go to waste, and at a meeting of the Horticultural Society held last evening he proposed that the Society take the building over and fit it up as a permanent home for the local horticulturalists. His idea was to leave the old building on the property where it now stands, and put it in a good state of repair, and also that a great deal be gone to the grounds surrounding by planting flowers, shrubs and other improvements that would add to the general appearance of a picturesque home.


George Sleeman, former Mayor and the building's owner, was in favor of the plan. Unfortunately, it never bore fruit.

At the end of March it was learned that Canadian actress, and "America's sweetheart", Mary Pickford had married Hollywood heartthrob Douglas Fairbanks (Mercury, 1 April). She and Fairbanks, along with Charlie Chaplin, had just formed the independent production company United Artists. Pollyanna, her first movie with the new company, was a big hit in early 1920. It established Pickford's popular "little girl" persona and also the term "Pollyanna" for someone who is naively optimistic about life, based on "The Glad Game" portrayed in the movie in which players must describe things they are grateful for, even though they may be miserable.

You can get sense of the movie from this scene between Pollyanna and her dying father at its outset:

If you are intrigued, then feel free to watch the whole thing (courtesy of Wikimedia Commons)!

Pickford was undoubtedly grateful for the divorce from her first husband, Owen Moore, who had became an abusive alcoholic. She must have been keen on a new beginning since she acquiesced to Owen's demand for a $100,000 settlement. Pickford's marriage to Fairbanks probably caused tongues to wag in the Royal City, coming as it did only days after the divorce.

Guelph also began to deal with implications of the ascent of the automobile, renewed with vigor since the end of the war. The Mercury's editor (25 May) noted that there were a number of incidents in which cars hit children who were crossing or playing in the streets. Streets had always been used as places to play by young Guelphites but the increasing number and velocity of cars meant that this practice was becoming rather dangerous. The editor blamed parents of the children in question, arguing that it was not fair to motorists that naive children should be allowed to play in the streets and retard traffic. He suggested that the city should construct more playgrounds and that parents should see to it that children restrict their fun to designated play areas.

As Easter approached, store owners urged customers to impress their lady friends with—what else?—chocolate! Here is an ad in the Mercury from the pharmacy of Bogardus and Barton (5 April). 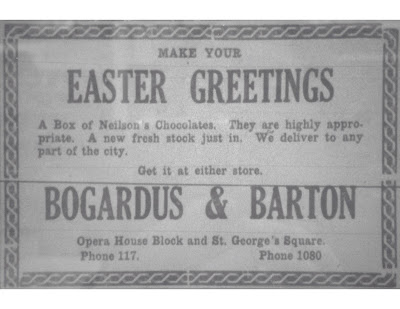 Easter itself fell on 4 April in 1920. The Mercury noted that the weather was uninviting, featuring a cold east wind and "sharp cutting snow" (5 April). Nevertheless, Guelph's churches were ready:


All the churches of the city were ready for the occasion with a profusion of flowers adorning chancel, pulpit and platform, all being significant of the new life that marks the passing of the winter of death, ushering in a season of joy and gladness and a hope for the good and the beautiful in life.


The article duly summarized the service in each of the City's main churches. All featured hymns, Easter lillies and recounting of the resurrection story. Reverend George Little of Chalmers Church (now Royal City Church) also took issue with doubters who looked to science or spiritualism for the truth about the afterlife. At Norfolk Street Methodist (now Lakeside Downtown), Mrs. Cook gave a talk entitled "Mission work in Japan." The Mercury reported that, despite the adverse weather, services in morning, afternoon, and evening were well attended.

In view of daunting events in recent history, it may be that Guelphites were looking extra hard for some Easter optimism as the 1920s began.

Posted by Cameron Shelley at 16:48 No comments: