The pride of Mountain Town: Guelph's standpipe of 1909

Because they were souvenirs, old postcards of Guelph (like many other towns) put churches, train stations, public buildings, and beauty spots at the centre of attention. However, it is sometimes interesting to peruse the periphery of these images. There may lie items that were not deemed of interest to casual shoppers but are of interest in the city's history.

Consider the image below, from a postcard printed for Charles Nelles around 1910. 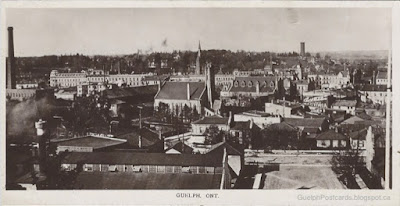 This picture was taken from the Central School and looks towards St. George's Square. A number of buildings still present today are visible in it, such as Knox Church, Chalmers Church (now Royal City Church), St. George's Church, and the Wellington Hotel.

Scan the horizon on the right and an unfamiliar cylinder appears on the brow of what was then called Horsman's Hill in the St. George's Park neighborhood. This was the Royal City's first standpipe, then the tallest item in town. At the time when the photograph was taken, the standpipe was very new, a highly visible symbol of the city's progress and, according to its admirers, the pride of Mountain Town.

In this case, a standpipe is a cylindrical tower used as a water reservoir. Guelph acquired one because it was experiencing trouble delivering water to its residents, businesses, and fire fighters—a perennial problem for modern cities.

From its early days, Guelph's central water supply system consisted of an iron hand pump. This "town pump" was located at the corner of Wilson and Carden streets, and had four sweeping handles that could be cranked manually to produce water from a well. To fight fires, water was pumped from such fixtures into a tank incorporated into a horse-drawn fire truck.

As the town grew and fire posed a greater threat to life and property, such a system was found inadequate. Schemes to provide centralized water distribution through pipes were proposed as early as Confederation but design and construction of a waterworks began in 1879, the year Guelph became Ontario's ninth city and acquired the moniker "The Royal City." A pumping station was erected along the Eramosa River and ten miles of pipe had been laid by the end of 1880.

As time went on, shortcomings of the system became more acute. Water drawn from the Eramosa river could be discoloured at times. Tests revealed "colon bacilli" in the water. As more residents, businesses, and services joined the system, its capacity became inadequate. Also, changes in pressure from the pumps damaged the pipes, resulting in leaks and breakages.

A standpipe helps to deal with problems of variations of pressure. Instead of feeding water to the system directly from a pump, which causes a surge whenever the pump is turned on and then a subsidence when it is turned off, a standpipe provides constant pressure as water can flow steadily downhill through the system from its fixed, elevated reservoir.

In 1907, the City set up a Water Commission to recommend changes to the system. The Commission advocated the idea of bringing clean water to town from springs at Arkell in Puslinch. The City adopted this plan, bought about 70 acres (about 28 hectares) in Arkell and had a pipeline laid to bring spring water to Guelph.

The standpipe was built to deliver the water in abundance and at an even pressure. Naturally, the structure had to occupy a high point in town and near the waterworks, so Horsman's Hill was an obvious choice. A special section of the Evening Mercury (13 March 1909) provided a gushing account of the new system, including the Royal City's outstanding new cylinder. 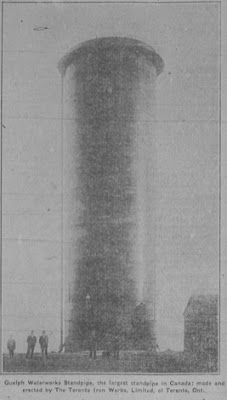 The enormity of this towering achievement is described in every way possible. It is said to be the largest standpipe in Canada at the time, of prodigious proportions:


The standpipe is thirty feet in diameter and 100 feet from base to top. An iron ladder runs perpendicularly up its south side to an iron platform and railing which encircles it near the top. The capacity is 500,000 gallons.
...
The base is of concrete. The first two rings are of 13/16 inch steel plates and these gradually decrease in the ascent to 3/8 inch. The structure itself with base, with water, when full, weighs 3,200 tons.
...
The work on the foundation for the standpipe was started on June 1st, and was satisfactorily completed within eleven days. A staff of fifteen men were employed on this contract. The foundation is 32 feet square and is 7 feet thick, and its immense strength can be judged by the tremendous weight that it must uphold. The excavation amounted to 428 cubic yards.


The amount and uniformity of the water pressure delivered are also spelled out in detail:


When it is full it gives 43 pounds pressure at the base. At the post office it gives 75 lbs. pressure when full. There is 50 lbs. pressure on the ground floor of the General Hospital. Pumping direct it is possible to give as high as 140 lbs. pressure at the Hospital. At other points in the city, of course, there are different degrees of pressure, according to the elevation. The load is always the same. The latter does not vary more than two pounds in the 24 hours. With the old pumps, the pressure varied from 45 to 110 pounds. So long as the standpipe is full there will be exactly the same pressure at a given point, whether one or ten streams are being drawn from it.


The system was also admirably suited to the demands of fire fighting in 1909:


The fire underwriters standard stream requires that a 1 ½ inch nozzle at the end of a single line of hose 250 feet long, will discharge 500,000 imperial gallons in 24 hours, with 80 lbs. pressure at the nozzle. That equals 200 gallons per minute. The fire underwriters call for ten standard streams the same as this for a town the size of Guelph. Such, then, is the capacity of the pump that the department can run 50 per cent, overload, or 4 ½ million gallons per 24 hours, in addition to having ½ million gals. in standpipe.


Residents of the Royal City could be forgiven for beaming with joy when they saw this new monument to progress overlooking their fair city, on the brow of "Mountain Town," opposite the Central School and the Church of Our Lady.

The standpipe appears in other postcards as well, though always in the background. Perhaps the best image is in the real-photo postcard below, with the standpipe looming behind a house on the Speed River, ca. 1910. 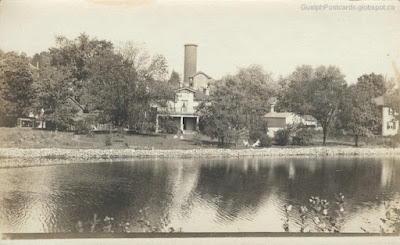 The message on the back of the card adds:


That address is now 34 Arthur street N. Built in 1866 for Robert Melvin, who was Mayor of Guelph 1875–1876, the house was originally called Calderwood (Partridge 1992, p. 16). The name "River Bank" is very suitable, as it sits on the bank of the Speed directly opposite the onetime location of the Priory.

One hopes that the residents of River Bank appreciated the chance to live in the impressive shadow of the giant new standpipe.

The standpipe appears in the background of another postcard, printed by the F.H. Leslie Co. of Niagara Falls around 1935. 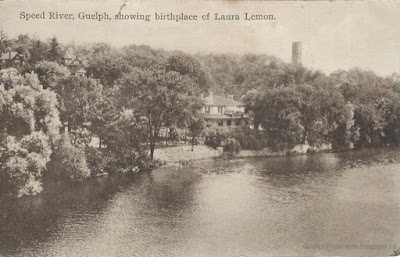 In the foreground is the house where Guelph's early musical celebrity Laura Lemon was born. In the background is the great standpipe.

The standpipe was located in the space between Grove street and Prospect avenue, in behind the current location of Hillcrest Park. In the map below, its approximate location and footprint is represented by the big black circle. 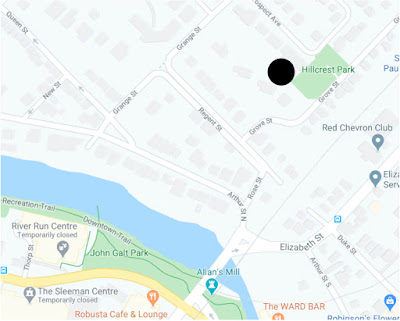 In 1968, the city waterworks were updated and the mighty standpipe removed. Yet, its sizable silhouette still lurks in old photos and postcards of the Royal City, where it stood ready to deliver fresh water for nearly 60 years.


Good sources of the early history of Guelph's Waterworks can be found in these issues of the Guelph Mercury:
On the name "Mountain Town" for the St. George's Park area, Ross Irwin (2008, p. 2) explains:

In 1829, John McDonald, PLS, the Canada Company surveyor of part of the township, acquired 186 acres east of the River Speed bounded by Metcalfe Street, Eramosa Road, Grange Street, and Budd Street. It was named "Mountain town".

Though the height of the drumlin on which the St. George's Park area sits is considerable, the term "mountain" does seem like an overstatement, of the sort usual with real estate developers. The name was very rarely applied, that I am aware of, though it is interesting that it persisted long enough to appear in the Mercury in 1909.