The Xmas season is upon us once again and memories of times past return to mind. Some of these glances back are prompted by ephemera like postcards. Below is picture of an Xmas message printed on a festive greeting card: 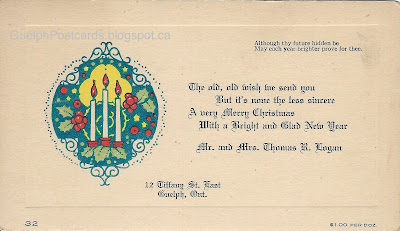 In some ways, the card is easy to understand. It conveys a common message, wishes for a Merry Christmas and Happy New Year, accompanied by picture of candles and festive plants in the shape of a wreath. It also gives the names "Mr. and Mrs. Thomas R. Logan," who are presumably the senders of the good wishes, and the address 12 Tiffany St. East in Guelph. Although it is not a postcard nor a folding Christmas card of the common type, it seems straightforward enough.

The location of 12 Tiffany Street East is easy enough to find with Google Street View:

The house is an example of the Queen Anne revival style, built in the late 1800s, likely at about the same time as its two neighbours closer to Woolwich Street.

However, Mr. & Mrs. Thomas R. Logan remain something of an enigma. No Guelph address book that I have consulted lists them, and their name never appears as residents of 12 Tiffany Street East. The card does have the text "$1.00 per dozen" written in the bottom right corner, suggesting that it may be a salesman's sample. Perhaps Mr. & Mrs. Logan were printers and this card is an advertisement.

So, instead of discussing the Logans, we can discuss Tiffany Street. According to Irwin (2008), the street was named after George Tiffany, the man who carried out the first survey of the Guelph town plot in 1827 at the direction of its founder, John Galt.

George Sylvester Tiffany was born in 1805 in Schohaire, New York and moved with his family to Upper Canada in 1812. He studied to become a land surveyor and the job with the Canada Company in Guelph must have been one of his first gigs (Tiffany 1901, pp. 45–46). Apparently not satisfied with this profession, he studied law and became a lawyer and relocated to Ancaster in 1836. During the Upper Canada rebellion of 1837, Tiffany went to Toronto under the command of Sir Allan Napier McNab to put down the revolt. He later became a reeve and then the second mayor of Hamilton.

A.E. Byerly (1935, p. 73) points out that, in 1836, Tiffany married Eliza Ann Strange, daughter of Henry Strange, a former governor of Demerera, West Indies, and who was an important figure in early Guelph history and an occupant of the Priory for a time. He went on to found Strange's Mills, now Rockwood, near Guelph.

Both men were immortalized in Guelph's street names. As with with their namesakes, Tiffany street and Strange street intersected. Strange street was the segment of what is now Dufferin Street, reaching from Kerr Street to Clarence Street, parallel to the river. Tiffany Street East spanned the block from Woolwich to Strange Streets. See the map below. 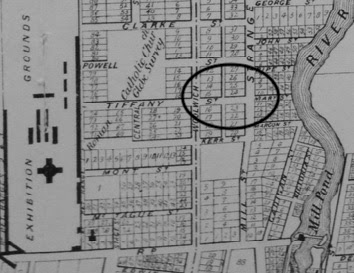 (The intersection of Tiffany Street East and Strange Street, inside the oval, Wellington County Atlas 1877.)

Both streets have since been changed. As Irwin (2008) notes, street names were not much regulated in Guelph's early years, resulting in some peculiarities. For example, Strange Street continued Mill Street from the south and was itself continued by Dufferin Street to the north, making three streets out of one continuous roadway that spanned only a few blocks. In 1907, the Post Office Department threatened to delay door-to-door delivery until confusing street names and numberings were sorted out. Several streets were rationalized in 1910. At this time, Mary Street, which continued Tiffany Street from Strange Street to the Speed River, was eliminated in favor of more Tiffany Street East. 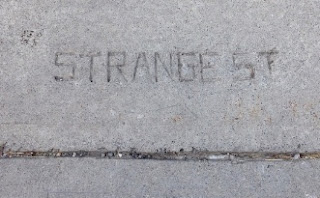 In view of the extension of Tiffany Street East in 1910, it seemed appropriate to look into what was happening in Guelph during Christmas time of that year.

The year 1910 was an important one for several Guelph institutions. The Armouries on Huskisson Street (now Wyndham Street South) were completed. Construction began on the Ontario Reformatory, then commonly known as the Prison Farm, on York Road just east of town. Today, its is known as the York Lands Green Hub.

However, perhaps the biggest change was the arrival of Niagara power.

Before its adoption, electricity in Ontario was typically provided by small, local outfits, either local utilities or generators purchased by companies to run their factories. However, with the development of large hydropower generating stations such as those at Niagara Falls, there was a considerable push to establish what later became known as "the Grid", that is, a publicly-owned, province-wide system of electricity generation and distribution. This effort was led by Adam Beck, a graduate of Rockwood Academy, who was later knighted for his efforts. The chief advantage of this system was to provide electricity broadly across the province, in abundance, and cheaply. 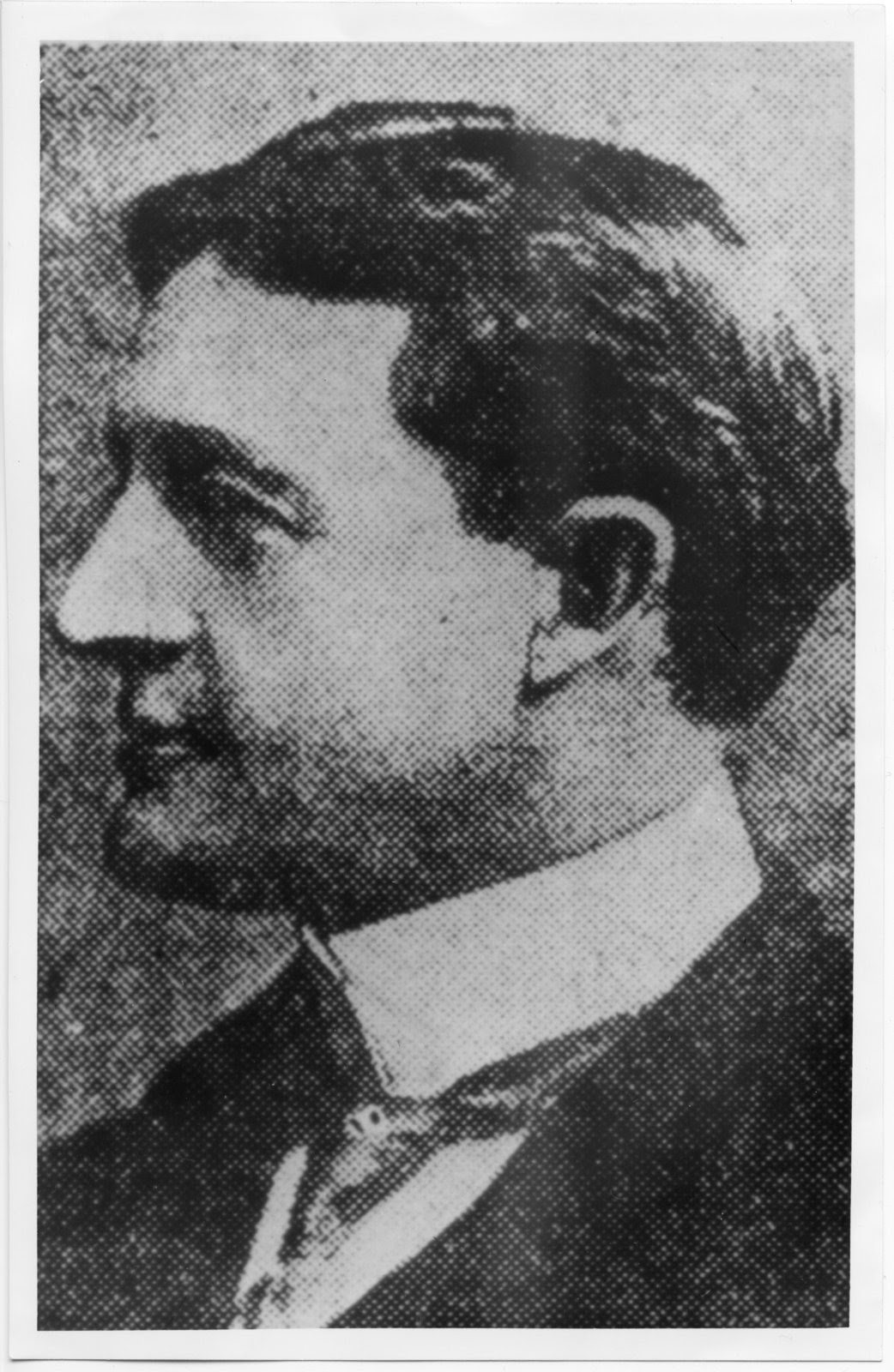 Niagara power was first connected to Guelph's electricity grid in September of 1910, and adopted industrially by the Taylor-Forbes plant in November. The transition did not go smoothly at first. On 4 December, a generator at the City's Light and Heat Commission (L&HC) blew out, leaving the residential area of Guelph in darkness. Manager John Heeg explained that the strain of serving the extra demand for lighting at the annual Winter Fair had proved too much for the Commission's ancient generators (Mercury, 5 December). For some years, in anticipation of Niagara power, the City had ceased to upgrade its own equipment and was now paying the piper.

The residential lights went out again the next night as another old generator bit the dust (Mercury, 6 December). Manager Heeg repeated his previous explanation. Also, he promised to expedite work on getting the new power substation up and running, which would allow the city to access enough Niagara power to make up for the shortfall in expired generators.

Of course, this work was tricky, as the substation had to transform electricity transmitted at 2,200 volts to 100 volts and 60 Hz, which was the new standard for domestic use. Furthermore, the new power configuration would mean that many people's old fans and other equipment would no longer function, since they were designed for the 125 Hz power previously provided by the city. Still, some power would be better than no power in mid-December.

Manager Heeg also urged the good citizens of Guelph to moderate their demand for electricity so that the remaining equipment might survive until Niagara power could be brought fully to bear.

Complaints were beginning to mount and Samuel Carter, Commissioner of the L&HC, gave a statement to the press (Mercury, 12 December): The City continued to experience difficulties with its ancient generators. Furthermore, Guelphites had not moderated their demand for electricity. If anything, demand continued to increase.

The LH&C had pressed its new substation into service to meet the emergency. However, the new equipment had not been properly checked out and broken in, and so failed after only a few hours of operation. The LH&C pressed its reserve generators into service. Alas, these also failed to perform. These generators had been exposed to a lot of dust as a result of an earlier fire in the substation and their bearings quickly seized up. Five out of the city's six generators were now out of commission.

Then, for the coup de grâce, the power feed from Niagara failed. The cause of this disconnection was not entirely clear, although speculation was that high winds in the Niagara region were playing havoc with the power lines there (Mercury, 14 December 1910). Adam Beck assured Ontarians that these glitches would be worked out and, after a few days, the juice did seem to flow consistently (Mercury, 19 December 1910). The Royal City's factories continued to hum and its businesses were able to carry out their Christmas trade even after dark.

Many seasonal items were available for the delectation of Guelph shoppers. The D.E. Macdonald store on Macdonnell Street featured "everything in Xmas presents for everybody," especially Christmas furs. C.W. Kelly's music store had a deal on Victor & Berliner's "Victrola" gram-o-phone record players plus many records to play on them. The Bond Hardware store offered a wide selection of sleighs.

Perhaps the best gift notion was proposed by the Gowdy Bros. company on the Market Square, which placed the ad below in the Mercury's Christmas extra issue:

Who wouldn't want a ton of coal for Christmas? In an era when houses were often heated by coal stoves and furnaces, the connotation of receiving Lehigh and Scranton's anthracite from St. Nick would have been different than it is today. (In fact, coal was only just becoming a punitive gift at the time.)

Of course, there remained the problem of what to get for the person who has everything. In this case, the Guelph School of Telegraphy in St. George's Square had the perfect suggestion (Mercury, 21 December 1910):


Give your son or daughter a course in telegraph operating for Xmas. It will be an everlasting reminder and benefit to them.


If the gift card were spelled out in Morse code, the recipient would have to take the course to truly appreciate it.

For provident souls who had done their shopping, Griffin's Opera House on Wyndham street had a special entertainment treat in store (Mercury, 19 December 1910). For a warm up, they had three great reels of moving pictures straight from the Edison, Essanay & Selig factories. After that came the Thaten Duo, featuring real Holland wooden shoe dancing and singing, straight from Rotterdam! For versimilitude, the act featured backdrops of quaint scenes from old Holland, presumably including dykes and windmills.

Finally, patrons would be amazed at the Kols Brothers, vaudeville contortionists widely known as the Human Serpents!

As today, turkey featured prominently in plans for the holiday season. Perhaps mindful of what happened to Ebenezer Scrooge in Dickins' "A Christmas Carol," J.W. Lyon, then President of the Board of the Radial Railway (the streetcar) gave each married man among its employees a turkey for Christmas (Mercury, 22 December 1910). The single men each received a box of cigars instead. Clearly, cooking a turkey was more than could be expected of any bachelor.


Jarvis, Ont., Dec. 22—The body found in a barrel in Montreal yesterday labelled "turkeys" was that of Matthew Johnston, caretaker of the Presbyterian church here. He was buried November 18th, and when the grave was opened this morning, the body was found missing. The casket had been cut and the corpse dragged out. John McSorley, formerly a medical student and eccentric character, is held here by the police.


Apparently, Mr. McSorley's eccentricities included resurrectionism, that is, digging up fresh corpses to sell to medical schools for doctor training. Montreal was a frequent destination for the proceeds of this practice (Belyea, 2016), although shipping "turkeys" all the way from Jarvis seems exceptional.

What Guelphites of the day or you, dear reader, should make of these two, turkey-related tales I leave for you to determine.