The island in the Square

The City of Guelph is contemplating some further changes to its downtown spaces. One of the changes under consideration is the construction of a large roundabout in St. George's Square. The main aim of the proposal is to establish a convivial public plaza in the large space that the new design would create there. A mock-up of the new design appears in the draft Streetscape Manual produced recently by the city: 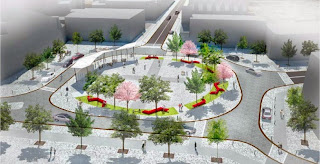 The report on downtown Guelph prepared by the Project for Public Spaces notes that:


Throughout history, St. George’s Square has always been a Central Square for the City of Guelph. During the past half century however, the Square’s more ceremonial and iconic elements gave way to more functional elements that were needed to support a growing city, namely transit service and a growing street network. Until very recently, St. George’s Square was the central bus transfer hub for downtown Guelph.


The proposed redesign would, among other things, return the Square to its earlier role.

Of course, the history of St. George's Square, and the space in its centre, is more complicated than that. It has been the site both of much traffic and of much controversy. A little of the story of St. George's Square appears in this earlier blog entry. However, since the Square has been of perennial interest to postcard makers, its history can be explored in this blog more thoroughly. For the present, I will outline this history and save more detailed accounts for later postings.

The Square began as a spot dedicated by John Galt to the Anglican Church. The first St. George's Church, a wood frame structure, was built in the middle of the space in 1833. Thus, it was the first island in the Square. Its location in the middle of Wyndham St. made it "one of the most conspicuous objects in the town..." in the opinion of a British visitor (Johnson 1977, p. 114). By 1851, the growth of the congregation required a larger church, and a stone building was constructed in the same location. As soon as 1859, however, prominent parishioners were seeking a new site for the church, one that was bigger still and removed from the commercial centre of the City (Johnson 1977, p. 223). By 1873, Dr. William Clarke had arranged for a new site (the current one) and the sale of the old site to the town. The second church was razed and the new one built at that time. After the rubble was removed, the Square stood empty for almost the first time.

The removal of the Church seems to imply that the townsfolk did not appreciate the detour that it necessitated. However, it did not take them long to seek out a new landmark to put down in the same place. In 1884, the citizens decided that the middle of the Square would be a good place for a fountain. The City Council collected donations, including a bronze statue of a blacksmith from local manufacturer J. B. Armstrong. The statue was placed atop a marble fountain and surrounded by a little garden, the whole becoming known as "The Blacksmith Fountain" (Couling 1996, p. 6).

The Blacksmith Fountain was octagonal in shape, framed by a small stretch of grass, and surrounded in turn by a short fence. It was joined by an arc-light on a pole for illumination. And thus, St. George's Square had its island back. A photo of the Square featuring the Blacksmith Fountain can been seen here.

The first major change to the island was the arrival of the Guelph Street Railway system in 1894. George Sleeman, the brewer, entered into what we would call a public-private partnership with the City to build a streetcar system (Johnson 1977, p. 285). As the tracks were laid up Wyndham St., they passed on either side of the Blacksmith Fountain. The Fountain then became an important stop along the streetcar's route. This confluence of uses proved fateful.

A good view of the Fountain as it then appeared can be seen on the postcard below. It was printed by Warwick Bros. & Rutter of Toronto. 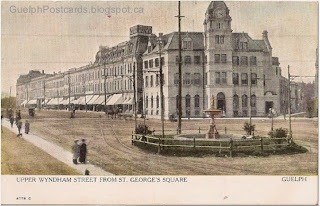 The photo was taken in 1907. The presence of the clock face in the Post Office tower dates the photo to no earlier than 1907 and the Fountain was altered in 1908, as we shall see.

The photo provides an excellent view of the Fountain and its immediate surroundings. The plantings around it are rendered in green by the lithographer, and the streetcar tracks on either sign are quite visible. Also visible is the base of the arc-light pole on the Upper Wyndham side. Interestingly, serrations are also apparent on the top of the fence rails around the Fountain. It seems clear that the designers of the garden wanted to let no casual intruders near the structure. It was for viewing only!

In 1908, Guelph celebrated its first Old Home Week. Photos of St. George's Square during parades through the city (like this one) show that the island had been renovated. The Fountain appears unchanged but the garden around it has been enlarged and changed to an oval shape, with the long axis along Wyndham St. The oval neatly fills in the lines of the streetcar tracks around the Fountain. Also, the arc-light pole has been replaced by a flag pole.

Photos of Old Home Week that year tend to obscure the island (although this photo shows people sitting in it while enjoying a parade.) However, postcards from roughly the same time more clearly show the island after this renovation. The card below, for example, shows the island along with its new fence. Keep off the grass! Also, note that the arc light is now mounted on a wire strung across the Square. 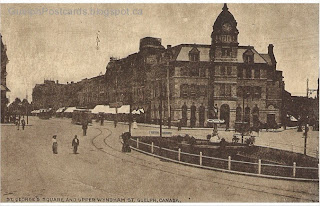 This card was also printed by Warwick Bros. and Rutter of Toronto, although in halftone (now yellowed). In addition to the features already mentioned, you can see benches placed at the end of the island facing Upper Wyndham for people to sit on as they kill time or await the next streetcar.

One aspect of street life that stands out in those older pictures is that people, streetcars, and horse-drawn conveyances tend to mingle freely on the street. In those days, streets were regarded as public places. Thus, everybody had a right to be in them. Standing in the middle of the street talking or waiting for a streetcar, for example, were perfectly acceptable things to do. All that changed in the era of the automobile.

By the 1920s, people were committed to the automobile as their main means of personal transportation. As a result, other street users were pressured to change their ways. Streetcars struggled to compete for ridership, while people on foot were increasingly confined to the sidewalks. These trends are certainly evident in the changing fortunes of the island in the Square.

In 1921, the Guelph streetcar system was purchased by Ontario Hydro, which set about rationalizing its service. One of their first moves was to make changes in the layout of the island. The Blacksmith Fountain was removed and relocated to its new home in Priory Square, where it remains today. New streetcar tracks were run directly through the centre of the Square, while two half-oval gardens were planted on either side. In effect, the island was split in two. Its inside edges provided boarding platforms for the streetcars while benches were placed on its outside edges for people to sit in the street.

This configuration can be seen in the postcard below. It was printed by The Valentine & Sons United Publishing Co., Ltd., Toronto, from a photo taken ca. 1925. (It is postmarked on 1 April, 1931.) 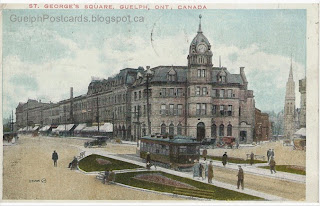 The picture suggests how many cars were commonly on the street at that time. With increasing car traffic in the Square, the presence of a transit depot in its centre island seemed bound to create conflict. And it did! However, remarkably perhaps, the island in the Square persisted for quite a while yet. Among other factors, the Great Depression and the Second World War delayed any major changes in infrastructure.

One change that did occur in that time, however, was the replacement of the streetcars by busses. The streetcar system proved to be a money-loser for Ontario Hydro, which attempted to sell the system back to the City in 1926. No sale! Finally, the streetcars were replaced entirely by busses in 1937, which continued to use the island as a central depot. 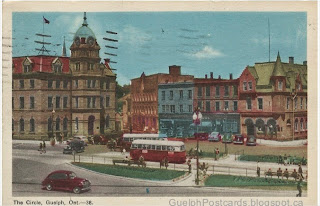 The Circle remains much as before, although it now plays host to buses, and there are no benches to allow people to sit in the street. Still, pedestrians are clearly expected to cross through traffic in order to get to the bus stop, a maneuver that grew increasingly dangerous as time went on.

After the Second World War, the economy picked up steam and car ownership resumed its climb. As such, the Circle had to go. In 1953, in the midst of much controversy, the City altered the island again. It increased the middle space from two lanes to four and placed concrete barriers along each side. The barriers discouraged pedestrians from walking through the middle of the Square to catch a bus.

This setup can be seen in the following postcard, taken on Dominion Day in 1954 (Coulman, 1977, n. 212). (Note the patriotic bunting hanging over the roadway.) It was published by the Photogelatine Engraving Co., Ltd., Toronto ca. 1955. 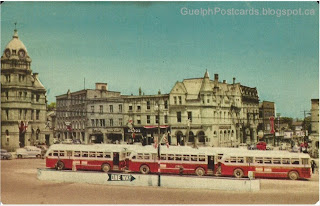 Not long after this photo was taken, the island was removed entirely. Bus stops were moved off to the sides of the Square. Now cars could pass along Wyndham Street straight through the middle of the Square without impediment.

The Street View scene roughly equivalent to the previous postcard would be the one below. No island there!

The fate of the island illustrates the impact that automobile adoption had on many streets in older cities. Designed originally for foot and horse traffic, these streets were redesigned to more closely resemble highways, by widening and straightening. The island in the Square resisted this treatment for a long time, out of its centrality to public transit and perhaps the attachment of older citizens to the Royal City's established ways. These are themes that can be explored in further postings.

Setting aside any practical considerations, I find it intriguing to imagine being on foot on an island in the middle of the Square, having traffic pass around me like the spokes on a wheel turning about its hub. It is hard to imagine, though, since I am used either to fleeing across it on foot or to wheeling through it in my car. If the notion of putting an island back in St. George's Square is to succeed, it will have to capture the imaginations of Guelphites, who will now find it alien and unfamiliar.

Posted by Cameron Shelley at 14:05 No comments: