Frederick Bogardus and his pharmacies

Over the sidewalk at the north end of Wyndham Street hung a curious sign. In the shape of a pestle, it said "Opera House Pharmacy // Bogardus // Chemist". The card was printed by the International Stationary Company in Picton, Ontario. The photo was likely taken during Old Home Week, 1913, which helps to explain the banners on the Wellington Hotel across the road. 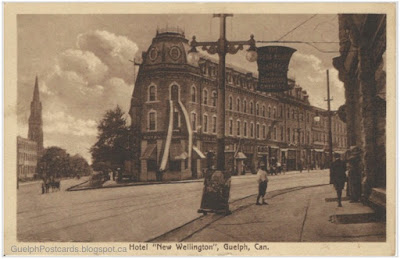 Frederick Francis Bogardus was a long-time and successful druggist in Guelph, and his drug stores appear in the corners of several postcards of the Royal City.

On his arrival, the Mercury made a special point of describing him to his new neighbors (8 Oct. 1904). For example, the Mercury article noted that Bogardus was an honor graduate of the Ontario College of Pharmacy and had just worked for eight years in Walker & Abbs’ Queen street pharmacy in his native St. Catherines. He was relocating to Guelph to take over the old Worthington Drug Company at 122–124 Wyndham Street, in the Opera House block, evidently with financial backing from H.W. Calkins of St. Catherines. Astutely, Bogardus named his new venture the Opera House Pharmacy.

We can gain some insight into Bogardus's early business through "Bogardus & Co's Almanac and Cook Book", a booklet published in 1910. The front cover features a large picture of the interior of a pharmacy, showing two men at work. Could they be Bogardus and Co? 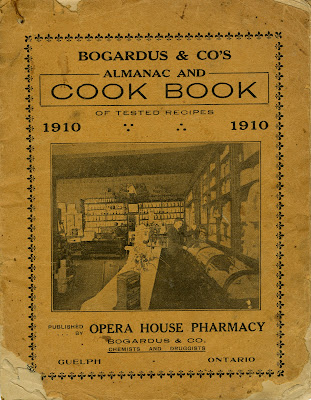 The booklet features a monthly almanac along with ads for the store's offerings. Of course, there are many recipes, for which many ingredients, such as baking powder, can be found in the store. For amusement, many pages feature jokes in the footers. Much of the humor is based on rather crude ethnic and gender stereotypes that would be regarded as rather tasteless today.

Of course, the Opera House Pharmacy offered lots of medicines, of a sort that I discussed in an earlier posting on illness in Guelph in the Edwardian era. Bogardus's Vegetable Liver Granules sound particularly good. Besides that, the store had lots of veterinary medicine, including horse pills and sheep dip. In fact, the book urges the reader to "Use pain balm when you or your horse has a sprain."

Besides getting prepared drugs, customers could apparently get Bogardus & Co to whip up their own inventions:


Our Specialty: We make a specialty of family recipes and prescriptions. If you have a valuable family recipe, let us dispense it. We use nothing but the best drugs and chemicals and dispense strictly with the prescription.


Where today could you get a pharmacist to make up drugs according to your own recipe?

Most intriguing to me are the trusses. The Opera House pharmacy sold all the usual personal items such as brushes, soaps, sponges, and perfumes. However, they were particularly well equipped with trusses. In this case, "truss" refers to a special belt or undergarment used to relieve discomfort from hernias. A hernia occurs when an internal organ like a bowel protrudes through a gap in a person's abdomen, especially the groin. Worn tightly around the waist, a truss applies pressure on the hernia, helping to hold it in and thus relieve some of the pain associated with it.

The Bogdardus & Co. Almanac and Cook Book describes their inventory of trusses in glowing terms:


We carry a complete stock of the different makes of trusses. When in need of a truss come to us. We don't charge you a fabulous price like some of those so-called truss experts; our prices are right. We guarantee a fit, with the proper style for every case.


In the "Commercial, Industrial and Progressive Edition of Guelph, Ontario" booklet issued by the Guelph Chamber of Commerce in 1916, the writeup of the Opera House Pharmacy even features a picture of a truss.

The writing on the pads says, "The Excelsior Improved". Perhaps this points to the Ohio Truss company, of Cincinnati, which was a manufacturer of bandages and elastics and featured the term "Excelsior" in their model line.

Although trusses could help with the pain of hernias, they could still be quite uncomfortable. So, it is no wonder that Bogardus took pains to assure potential customers of his attention to proper fit.

Frederick Bogardus married Ada Maude Hill of St. Catherines on 8 June 1910. They went on to have three children: Arthur, Elizabeth, and Doris.

Bogardus must have been good at his job. In 1917, he went into partnership with Walter Barton, a former clerk at the Opera House Pharmacy (Mercury, 6 Nov. 1947). The partnership even opened a second location in the Mahoney Block in St. George's Square, at 74 Wyndham Street. The new location was also astutely named, as "Bogardus and Barton." It appears in the postcard below, located in the far left corner, opposite the old Bank of Montreal building. 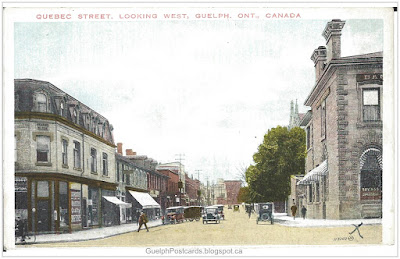 The postcard was printed by The Valentine & Sons United Publishing Co., Ltd, of Toronto from a photo dating from around 1925. The corner entrance of Bogardus & and Barton can be made out better in the detail below. The profuse signage leaves no doubt as to the nature of the business. The picture window on Quebec Street reads, "Bogardus and Barton // Quality Drug Stores" The proprietors' concern with the health of their customers is reinforced by the word "Drugs" in large letters over the door, as well as the word "Cigars" on either side.

Bogardus and Barton seems to have carried on a similar business to the Opera House Pharmacy, although one advertisement does mention photo developing in association with the new location (GCM 2009.32.1200).

Frederick Bogardus had become a settled and significant citizen of the Royal City. He appears in a photograph of the Guelph Chamber of Commerce Annual Picnic held in 1922, along with many other local businessmen (GCM 1981.67.1). Unfortunately, the photo caption does not identify who is who, so it is unclear which face belongs to Bogardus!

Bogardus had also become a centerpiece of the local lawn bowling league. Newspaper accounts of lawn bowling matches often feature "F. Bogardus", who was a member of the Victoria rink. The Toronto Star (10 Aug. 1916), for example, notes F. Bogardus was a member of the Guelph team, also including A. Leitch, T.W. Fox, and G. Chapman (skip), who won the Kuntz Trophy, 19 to 11, over a team from Galt in a tournament played in Waterloo.

His love of lawn bowling seems to have been life-long. In a booklet entitled "Guelph Sports Hall of Fame" (1972), Harold Cole puts Frederick Bogardus in the Hall of Fame, noting that he was "generally regarded as the dean of the [Guelph Lawn Bowling] club, and whose ability at the game lived with him all the years of his life" (GCM 1980.41.4).

Walter Barton died in 1934. Perhaps finding two locations to be too onerous to manage, Bogardus wrapped up both locations and moved Bogardus Drugs across St. George's Square to 55 Wyndham Street, on the south side of the Square. On 1 Jan. 1937, Bogardus moved the store up the street to Wyndham Street 91A, just north of the old Post Office and Customs building, where the Sip Club now stands. The location was evidently rented from the C.N.R., which had a ticket and telegraph office there. When the C.N.R. cleared out in 1947, Bogardus bought the location and expanded into the whole space, renovating the ground floor and doubling the size of his operation (Mercury, 6 Nov. 1947).

Just beforehand, in 1946, Bogardus had taken on a new partner, his son, Arthur. Arthur Bogardus had trained as a druggist at the University of Toronto and graduated in 1940. He promptly volunteered to serve with the Ontario Medical Corps and went overseas with the 10th General Hospital. On his return, he and his father became partners in the new store.

This edition of the Bogardus drug store can be seen in a postcard showing Upper Wyndham Street around 1950. The pharmacy is on the right edge of the picture, beneath the sign that says, "Drugs". The postcard was printed by the Photogeletine Engraving Co., Ltd., of Toronto. The sign and storefront can be made out more clearly in the detail below. The sign appears to read, "Drugs // Fred'k Bogardus" and is accompanied by a shield for the I.D.A., the International Druggists Alliance, which Bogardus must have belonged to. 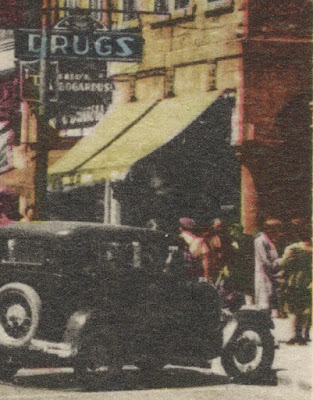 About 1953, Bogardus Drug Store welcomed a new partner, Orval Gaul. Gaul had graduated from the University of Toronto's Pharmacy School in 1950 and seems to have begun working for Bogardus shortly thereafter. The business was appropriately renamed the "Bogardus-Gaul Pharmacy" and remained in the same location.

This iteration of the store can be seen in the postcard below, printed around 1965 by the Mutual Wholesale Stationary Limited, London, Ont., just to the left of the Scotia Bank building. 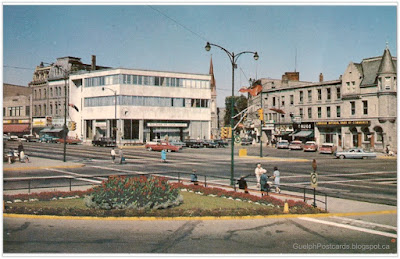 You can get a better view of the store front in this photograph at the Guelph Civic Museums archive: 1992.28.188.

Frederick Bogardus retired in 1957, having been in business in the Royal City for some 53 years (Mercury; 1 April 1968). He received a 50-year jewel from the Waverly Lodge Masonic Order for his long service to that association. He received a certificate from the Ontario College of Pharmacy, Toronto, 2 June 1958, for being a member for 50 years (GCM 2002.6.2). In his retirement, he continued to enjoy his passion for lawn bowling. He died on 31 March 1968 at the Elim Lodge Nursing Home and is buried in Woodlawn Cemetery.


The Pharmacy itself was carried on by Arthur Bogardus and Orval Gaul. It appears to have remained in business until about 2002, when Arthur Bogardus died. In all, the Bogardus Pharmacy ran in Guelph for 98 years, a remarkable span.

Please feel free to leave anything further that you know about Arthur Bogardus and his pharmacy in the comments. It would be especially interesting to hear about the later years of the business and the Bogardus Rose Bowl trophy (GPL F45-0-2-0-0-1876) associated with the Guelph Lawn Bowling Club.

Thanks to Kathleen Wall of the Guelph Civic Museums for help with research for this post!

Posted by Cameron Shelley at 16:34 No comments: