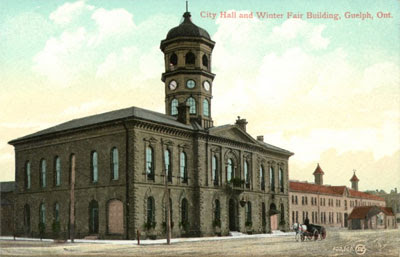 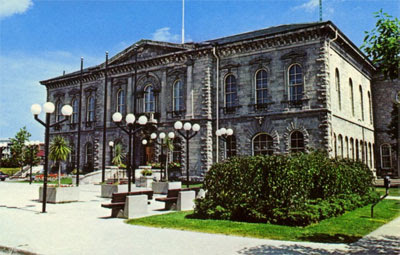 Posted by Cameron Shelley at 08:59 No comments:

I suspect that the the title of this post will have readers scratching their heads. What does "Bowling for dollars" (BFD) have to do with Guelph postcards? Let me explain, beginning with BFD itself.

As noted on its Wikipedia page, Bowling for dollars was an American game show where contestants would bowl to win prize money. It seems to have originated in the late 1960s, and reached its zenith in the mid 1970s. Each station that aired the show ran its own version, but the format was largely the same everywhere:


The show's main set consisted of a sliding door from which the host emerged, as did the contestants, one-by-one. There was also a Jackpot light with a numeric display of its value, and a Pin Pal hopper. There were also stands set up for an audience.


Each contestant was briefly interviewed by the host and would then point out their family in the audience before the game commenced. They would then bowl two balls, and receive a prize depending on the number of pins knocked down. There was extra money for strikes and spares, and a special Jackpot for any bowler who bowled two strikes in a row.

You can get the idea from this clip from the WTAE Pittsburgh station:

You may have noticed that, after the introductions, Lori opened a hopper filled with postcards. Viewers of the show were encouraged to send postcards identifying themselves to the station. Each week, the postcards received were placed in the hopper and each contestant would pick one out. The person named on the selected card was the "Pin Pal", who would win the same amount as the contestant. The postcards served to allow viewers at home to take part in the excitement.

Two postcards in my collection were used to enter Guelphites as Pin Pals. The first postcard has on its front a photo of picnickers enjoying Riverside Park. 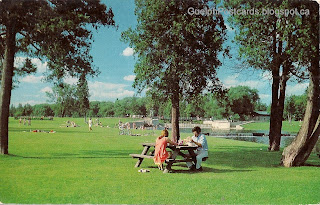 On the back, the card is identified as a "Traveltime product", distributed by the "Kitchener News Co. Ltd.", using the Colurychrome process. The scene is labelled as "Silver Creek Park // Guelph, Ontario // Picnic and playground area". This is confusing because, today, Silvercreek Park comprises the banks of the Speed River in the city's downtown, near Edinburgh Road. In the early 1970s, however, it seems to have denoted the southern half of what is now Riverside Park in the north end. Or, perhaps the producer was confused.

The second postcard has a photo of the old OAC Biology Building, where I believe the OVC Pathology Building now stands. 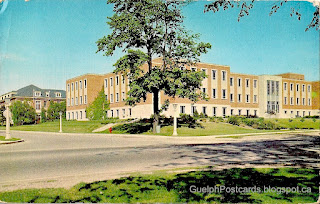 On the back, the card is identified by its logo as another Traveltime product from Kitchener. The scene is labelled as "Biology Building // Guelph University // Guelph, Ontario." The card is also addressed to "Pin Pal" at WGR TV, and the addressee is "Norm. Harrison // 4 Sunnylea Cres. // Ap. 1 // Guelph Ont. // Can." The postmark reads "3 VII, 1978".

I wonder if Mary or Norm won anything.

Evidently, Guelphites were treated to the Buffalo edition of the show, hosted by Ed Kilgore who, as it happens, just recently left WGRZ Buffalo after 40 years. Ed's picture was put in the announcement of the show at its inception, placed in the Toronto Star on December 26, 1972. Check it out. 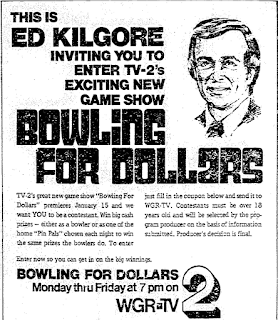 Although the heyday of the show belongs now to the distant past, it is still fixed in the memories of many. It has, for example, become a paradigm for interactive entertainment, as noted here in the Guelph Mercury (Oct. 16, 2001):


Undaunted, their [the NHL's] recommendations include elimination of on-ice activities, restriction of fireworks and laser shows where smoke or mist is a no-no. This is directed at quality ice for the players.
It's obvious this means curtailing the popular, between periods, "bowling for dollars," the sling-shotting of humans down the length of the ice into giant inflatable pins. These people are randomly selected dopes who come out of the stands with the express purpose of winning pizza and nachos for their entire row of seats.


Also, it has become an activity useful for charity fundraising, as exemplified in this item from the Kitchener Post (June 14, 2012) in an article entitled "Bowling for Dollars":


The Kitchener Lawn Bowling Club is holding a special fundraising event on June 16 in support of St. Mary's General Hospital. Funds raised will be used to purchase a portable pulse oximetry machine for the hospital's sixth-floor chest unit.


All in good fun!

Never the most gripping of shows, BFD became a byword for tedious, crass, or low-brow entertainment among some observers. Here are some interesting mentions from the Toronto Star. The first is from Would you rather (a) sleep or (b) vote? (Gary Lautens; May 24, 1977):


During paid political announcements on TV that interrupt your favorite programs, do you (a) use the time for a trip to the washroom, (b) draw a moustache on your TV screen with magic marker, (c) switch to another channel in the hope of getting Bowling for Dollars, Polka Time, or a Tide commercial instead?


This show [the Grammy Awards] had more sequined tuxedos than a Liberace lookalike contest. The moments of victory had all the class and none of the spontaneity of Bowling for Dollars, and the musical numbers were performed with the vitality and vibrancy you might expect from a troupe of heroin addicts on the nod.


Did somebody mention the word ‘reruns’? … How about a special called Bowling for Dollar’s Finest Strikes? Or The Best Hockey Slapshots of 1983? I fear TV programmers are about to unload these on us. Certainly, they’ve tried everything else.

Whatever your view of Bowling for Dollars, it was a bit of popular culture that reached Guelph and left a lasting impression. Plus, it seems to have sold a lot of postcards. How many more Pin Pal cards from Guelph are hidden away in the attics, drawers and albums of the region?

So, if you are a Guelphite who sent in a card—or just have fond memories of the show—post a comment and let us know!

Posted by Cameron Shelley at 06:25 No comments: