Flag fight at the O.A.C.

Each September, new students at the University of Guelph are led through a series of activities, known as Orientation Week, designed to welcome them to campus and familiarize them with its ways and means. Events include campus tours and friendly greetings from more senior students.

At the Ontario Agricultural College of an earlier era, the reception of new students included activities decidedly at odds with current practice. The central ritual of this earlier initiation was the flag fight, a pitched battle in which the Freshies (freshmen, or first-year students) defended a cloth fixed to a pole against attacks from the Sophs (sophomores, or second-year students) and a barrage of noxious missiles.


On a certain day in September sundry and seemingly unaccountable visits were paid by the acolytes of the Second Year to both the poultry department and that fair city of Guelph. The object of these visits was but too plainly felt, or shall we say tasted, by the Freshmen towards nightfall. At supper time preparations were also going on apace in the southeast corner of the campus, and by 7 p.m. there was incorporated in that peaceful scene a twenty-foot pole with the Freshmen emblem lazily flapping in the evening breeze.
Alas! The face of this earth is ever changing and this was but too true when applied to our present scene.
In the brief space of one half hour that flag pole was the centre of a mass of seething, surging humanity, and the sweet fragrance of the nocturnal air was polluted by the “foul” smell of “incubator eggs.”
The struggle had been raging for some time; the Freshies manfully up holding their colours—if this is not too elite an expression for that jaded apparition of an emblem; the Sophs with equal tenacity endeavoring to raze them to the ground, and the spectators growing dubious of the result. Suddenly, however, a Soph shot up that pole like a streak of lubricated lightning, and with lusty shouts from his comrades below he rent it from its staff.
It was “Scottie Lawson,” and to say that he was cheered would ill describe his reception. He was carried round the college on the shoulders of his classmates to the symbolic music of Sophomore yells, and was well nigh killed before regaining terra firma.
From this gay sight let us glance at the returning Freshies. They were glad it was over, but were indeed a sorry, spectacular sight. Some bore the sanguinary stains of decomposed tomatoes and others the more golden lustre of eggs in the last stages of putrefaction; again some were divested of raiment, especially in the matter of hats and shirts. In all they were in a deplorable condition, but had the consolation that they were little worse than the Sophs.

Hazing rituals had been part of student life at the O.A.C. since its inception (as was the case at most colleges of the era). Each year, the sophomore class was expected to devise novel torments for the incoming group. These usually involved some combination of combat and assault with unpleasant substances and often occurred at night. In 1907, the sophomores came up with the idea of the flag fight, such as the one described above (O.A.C. Review 1913, v. 26, n. 1, p. 22).

The contest proved popular and became the central event in initiation for many years afterwards. It also became an attraction for the townsfolk of Guelph, who seem to have enjoyed watching it. It was also attended by the girls of Macdonald Hall, which may have added to the humiliation of the losers. In addition, the fight was the subject of a series of postcards, which exhibit each stage of the event.

First is "The challenge." On the left, the freshmen surround their flagpole ready to fend off attacks from any side. On the right are the sophomores, considering their strategy. 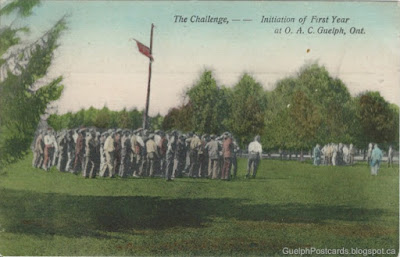 Second is "The attack." A sophomore attempts to climb the pole while freshmen try to drag him down. 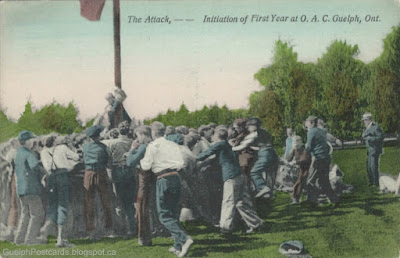 Third is "The repulse." It seems that the attack was beaten off, while wrestling matches between pairs of first- and second-year students have broken out. 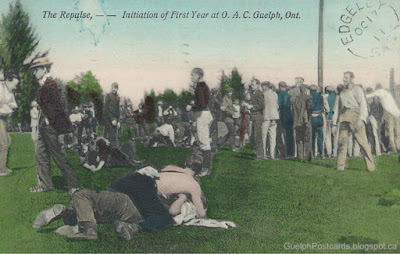 Fourth and last is "The finish." The contest is over. A student stands, facing the camera with his shirt in rags. Many more items of shredded clothing dot the landscape. 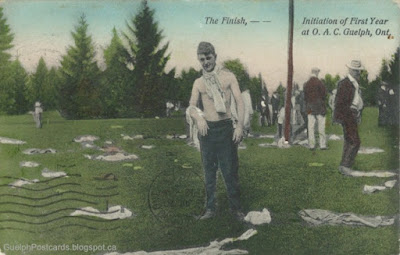 Rending of shirts and hats was considered an indispensable part of the event.

The postcards were printed for prominent local druggist, A.B. Petrie, who perhaps took a particular interest in it. The earliest postmark that I have seen for a card in this series is January 1909. This suggests the photos were taken in either 1907 or 1908. My guess is that it is the 1907—and first—event that is depicted. In his recollection of the 1907 flag fight, S.J. Neville, who was one of the Sophomore organizers, recalls that no weapons or projectiles were allowed that year (O.A.C. Review 1913, v. 26, n. 1, p. 22):


We called the newcomers out in the afternoon, gave them a flag to defend, and ruled out all forms of dirt or weapons, even to water and knotted towels.


In contrast, the 1908 event was characterized by the use of rotten tomatoes and eggs, as noted above. The pictures in the postcards show no evidence of such weapons, so they most likely show the 1907 edition.

There are many possible reasons for the origin and appeal of hazing rituals of this sort. These reasons include (Cimino 2011, pp. 243–244):


In his recollections, Neville clearly views the object of the flag fight at the O.A.C. in the first year, as a way of quelling inter-year rivalries. He notes that the sophomores of 1907, including himself, lost the fight but did not feel dishonored since the fight was conducted without meanness. They went on to have a good relationship with the freshmen class of that year.

Neville contrasts that situation with the relationship between his class and the preceding one due to their initiation in 1906:

My first knowledge of initiation was, as was natural, gained at the expense of personal suffering, mostly mental, I admit, on a stricken field. In the forefront of battle, at the elbow of the strong man, Chinky Moorhouse, I undoubtedly received my full share of the good things, including two eyes-ful of flour and molasses, which signally failed to render the dark and stormy night any brighter. That was the last of the old-fashioned objectless dirt-battles. It was common-place both while in progress and in results, and we Freshies were duly humbled—for the time.

Evidently, the sophomores of 1906 were bent on a display of dominance.

Neville notes that the flag fight of 1913 was particularly brutal, featuring dousing of the freshmen with a mixture of water, tar, and carbon disulfide, a noxious chemical whose physical effects include, "tingling or numbness, cramps, muscle weakness, pain, distal sensory loss, and neurophysiological impairment." Not surprisingly, this precocious use of chemical warfare did not sit well with the vanquished freshmen, and the two sides engaged in a series of reprisals throughout the rest of the year.

Initiations were banned in Ontario universities in 1926 but the flag fight at the O.A.C. continued (Globe, 1 Oct. 1926). The O.A.C. was held to be exempt from the rule, perhaps because it was officially a part of the Ontario Ministry of Agriculture, which had not issued such an instruction.

The last flag fight that I am currently aware of took place in 1929. However, I have not made a search specifically for later occurrences, so it may have gone on for many years afterwards. If you know of any later ones, or of similar events at other colleges, perhaps you could leave them in the comments below.

The flag fight is a curious development in college initiation rituals. It was introduced, in part, as an alternative to "object-less" dirt fights that took place in earlier years. It is in some ways like a tug-of-war in which two teams compete to move a flag tied to a rope into their territory. Unlike a tug-of-war, the flag fight still involved direct physical combat. This fact may explain why some later fights featured the re-introduction of weaponry by the sophomores, as a way of overcoming their numerical inferiority and to ensure their dominance over their first-year rivals.

Walking across Johnston Green today, it may be fun for freshmen to imagine a tall pole with a flag flying on top, along with the sophomore class, eggs and tomatoes at the ready, preparing to charge. Or, not.

Posted by Cameron Shelley at 18:08 No comments: