"A national victory": The OAC triumphs in stock judging, 1907

A cold but ebullient crowd of students presses around the Blacksmith Fountain in St. George's Square. Two of their number stand atop the fountain, handling the Blacksmith while the rest cheer them on. Bystanders gather around the margins of the Square, taking in the spectacle. A placard held by the students reads "National Victory". A spectator on the second floor of the Bank of Commerce, on the east side of the Square, grabs a nearby camera and takes a snap. This great day for the Ontario Agricultural College (OAC), Guelph and, apparently, Canada, is duly immortalized.

Later, the photo was turned into a postcard featuring the caption "O.A.C. National Victory Celebration." It can still be seen today, courtesy of the John Keleher collection: 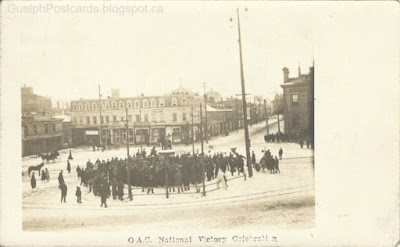 This photo appears to capture a moment in celebrations of the OAC's third victory in competition for the Spoor Trophy, a prize awarded for achievement in stock judging. John A. Spoor was an American business man with particular interest in the livestock trade. In 1900, he became President of the International Livestock Exposition in Chicago and instituted a livestock judging competition for agricultural students. At the end of November, students from around North America converged on the Chicago exhibition to show their judging chops.

Spoor commissioned a bronze trophy for the occasion, in the form of a large bull. The OAC took an interest in the competition and began to send teams of students to take part.

The OAC offered a variety of degree programs focussed on agriculture. Students who majored in the Agriculture Option studied a number of subjects including Animal Husbandry. This included study of the principle breeds of cattle, sheep, pigs, and horses and their preferred characteristics, along with practical work in judging these on inspection. The point of this study was to enable students to continue improvements to animal breeds that they might raise on their own farms. Improvement could be measured in the financial returns that farmers realized from their stock (OAC Review, v. 25, no. 9, pp. 431–433):


... every breeder, if he expects to accomplish results as an improver of his live stock, must know the conformation consistent with each animal's utility and the type which will yield him the largest returns.


The utility of an animal depended crucially on the condition of its tissues and internal organs. These could not be viewed directly in a live animal, so the trick for students was to learn to judge these matters from an external inspection.

At the Guelph campus, judging practice often took place in the Judging Pavilion, now known appropriately as the Bullring, and shown in the Valentine & Sons postcard, ca. 1905, below: 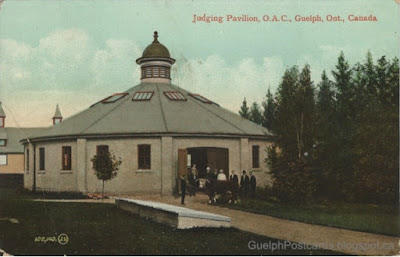 In their Senior year, the best students in the Agriculture Option were selected and trained for the competition. At the appointed time, similar teams from agricultural colleges across North America would converge on Chicago for the ultimate test of their mettle. The contest is described in detail in the OAC Review (1910, v. 23, n. 2, pp. 67–68):


On the day of the contest they meet in the great arena and are divided into four sections. Four different classes of live stock are brought in the ring and a section goes to each class and has eighteen minutes to place the animals and write notes. After the eighteen minutes they are moved to another class of stock and twice again, until the four rings are judged. Then the boys are marshalled in four sections and take turns in going before the judges. There are four sets of judges, one set for each class of live stock. Each boy has from one to two minutes to state his reasons for his placing of the class. After giving his reasons he retires to his section and remains until all have given reasons, then the section moves along to a second set of judges, and so twice more until reasons are given on the four classes of stock. This completes one-third of the work. Again four classes of stock are brought in and the same course pursued, and yet once more. Owing to tedious delays, the contest is not usually over until ten p.m. The boys come out from giving their last reasons a wearied, jaded crowd, despondent if they discover many mistakes in placings, awfully weary, but knowing that another contest would find them better prepared in every way.


In a nutshell, each student is rated according to how well his judgment accords with that of the experts. The Spoor Trophy went to the team with the best overall score in the various categories.

Student teams from the OAC won the trophy in 1905 and 1906, so the 1907 team went south with great expectations, and their efforts were crowned with success! Because the 1907 victory was the College's third in a row, it was judged not merely a victory for the institution but for the whole nation. The Toronto Globe proclaimed, "No international prize ever brought to Canada was better won or more beneficently significant than this trophy" (Mercury, 4 Dec 1907). 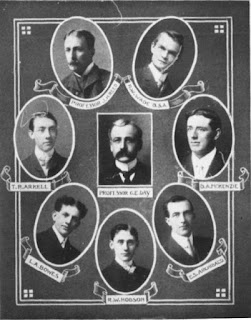 As the leading man in training the team, Professor Day gets the special, central and rectangular treatment.

Then there is the trophy itself: 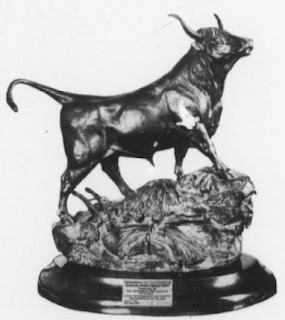 This fine specimen was created by August Nicolas Cain, a French sculptor known for his portrayals of animals in bronze.

Then there is the hometown celebration, leading up to the event in St. George's Square, as related by the OAC Review:


Monday, December 2nd, 1907, will long be remembered in the annals of the college as the day on which we concentrated all the means at our disposal to celebrate the great national victory gained by our stock-judging team at Chicago. As President Creelman had granted us a half-holiday, accordingly about 2 p.m., the students, over two hundred strong, assembled in front of the dormitory. The bronze bull, mounted on a wagon decorated with red and blue, headed the procession, and with flags, pennons and streamers flying, with horns blowing and college yells filling the air, this truly great demonstration of patriotic spirit and enthusiasm filed down the college hill. Accompanied by a number of Macdonald girls in a carryall, we arrived in the city, and proceeded to make things lively. The residences of some of the various professors were visited, and the usual cheers given. The procession, then headed by J. Hugo Reed on horseback, marched back to St. George's Square and surrounded the statue while two of the students gave it a much-needed protection against the weather in the form of a liberal application of red and blue paint.


Red and blue were the College colors.

Of course, this treatment of the poor Blacksmith is reminiscent of the current practice of University of Guelph students who occasionally paint the cannon Old Jeremiah on campus today. This observation invites the question: Why didn't the OAC students paint something on campus—even Old Jeremiah itself, which sat on Johnston Green—instead of the Blacksmith in the middle of town?

I suspect that the answer is that this "national victory" called for a more prominent, public acknowledgment. Since the Blacksmith Fountain sat in the centre of Guelph, in the midst of its main thoroughfare, it was the most "national" of objects available for decorative commemoration.

This idea is confirmed by subsequent events. After the students finished with the Blacksmith, they repaired to the City Hall (now the "Old City Hall") to receive congratulations from every available public official. The students were eulogized by Mayor Newstead, M.P.P. J.P. Downey, and M.P. Hugh Guthrie. Even Police Chief Randall was roped into making a congratulatory speech. (Did he know his audience had just painted a public monument?) The Mercury (3 Dec 1907) describes the scene):


The boys in the burlesque costumes lined up on either side of the steps and gave vent to their feelings at each appreciative sally of the speakers in cheers loud and continuous. They rallied round the bull and each speaker was given three hearty cheers led by the man on the wagon.


It also records Hugh Guthrie's affirmation of the significance of their achievement:


"The judging team of the Ontario Agricultural College are a credit not only to the Institution they represent, the city of Guelph, and the Province of Ontario, but to the whole Dominion of Canada."


Glowing with this lavish praise, the crowd carried on back up Wyndham Street to the Kandy Kitchen, where they gorged themselves on treats. Then, sated and elated, they dragged themselves and their trophy back to campus perhaps for more merriment.

According to the rules of the competition, any institution that won a trophy three times in a row got to "retire" it. Accordingly, the OAC kept theirs. (Since Iowa State won the first trophy in 1901, 1902, and 1903, that version remains there.) Evidently, the trophy remains with the OAC even today.

So, we have both the trophy and the postcard to remind us of the time when, in the stockyards of Chicago, the OAC won a great victory for themselves, for Guelph, Ontario, and for their grateful nation. Perhaps the Blacksmith also remembers the event but maybe not so fondly.

Identification of this postcard with the OAC celebration on 2 Dec 1907 rests on three points:
Maybe students from the OAC could be persuaded to re-stage the celebration someday, just for old-time's sake, minus the paint, of course.
Posted by Cameron Shelley at 09:19 No comments: