Conflict erupted recently in the City over a plan by Vesterra Property Management to renovate the former Family and Children's Services building at 55 Delhi St. Local residents were happy with the plan to turn the structure into 12 condominium units. However, they were displeased with the developer's plan to put parking on the front lawn. As the Streetview image below shows, the front of the building is the site of a number of shrubs and mature trees, which the neighbours prefer to pavement.

A look at the building might also suggest that it is an older building which, indeed, it is. It was built in 1910 when it was widely known as the "Nurses' Home", that is, a residence for nurses working at Guelph General Hospital just up Delhi St. In fact, the building is in Guelph’s Municipal Register of Cultural Heritage Properties as a non-registered structure. There, it is described as follows:


Some of these features, such as the gable roofs, half-moon windows, and quoins are visible in the image above, but foliage hides the rest.

To get a better view, you can look at this postcard published by Valentine & Sons Publishing Co., from a picture taken probably not long after its construction. 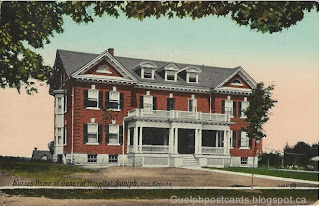 At this point, only a couple of little saplings stand between the building and street. So, it is easier to see the Tuscan columned entrance, the carved and pedimented dormers, and even the oriole windows at the near end. It is quite a dignified, even imposing structure. The Dictionary of Architects of Canada credits the design to Stewart McPhie, who had a had an office in Guelph with W. A. Mahoney. It hints that Mahoney may have had more to do with commissions in Guelph, so perhaps the credit should go to him. The Guelph Mercury notes that the "stone and brick contractors" were a local pair, Johnston and Williams (16 May 1910).

The Nurses' Home had a 10-year gestation. As noted in the Mercury of 21 June 1906, the idea and money for a residence originated with a bequest of $5000 by Mrs. Isabella Forsyth. Mrs. Forsyth was the widow of Mr. James Forsyth, who was foreman of the Ontario Agriculture College's Horticulture Department from 1880 through 1893. He died in 1899, and Isabella shortly thereafter on 19 January 1900.

Intriguingly, a copy of Mrs. Forsyth's will lies in the Archives at the University of Guelph. The Forsyths were well connected, as Mrs. Forsyth has some very upstanding Guelphites as executors including Alexander Petrie, who has been discussed in a previous post in connection with the Petrie Building. The first bequest in her will is the $5000 for the Nurses' Home:


To the Trustees of the Guelph General Hospital (out of my personal property) the sum of five thousand dollars with which they are to erect upon the Hospital grounds convenient to the said Hospital a residence for the said Hospital nurses and to be known as the Forsyth and Hepburn Cottage...


This paragraph poses some riddles. Why would Mrs. Forsyth endow a residence for nurses, and why would she want it to be called the "Forsyth and Hepburn" Cottage? The second question is easily answered, as the will identifies several relatives on her side of the family as Hepburns. So, that was her maiden name. As for the first question, the will leaves moneys to relatives and institutions in Elgin County, including a bequest of $3000 for a nurses' residence in St. Thomas. It may well be, as historical notes left with the will suggest, that Isabella trained as a nurse in St. Thomas before moving to Guelph. Perhaps she even served on the Hospital board, although that is just a speculation. In any event, she apparently took a keen interest in the welfare of nurses.

Why, then, did it take ten years for the home to be built? That is difficult to answer, but one reason might be that there was already a nurses' residence on the grounds of the hospital. The Dictionary of the Architects of Canada credits Stewart McPhie with the Nurses' Residence for the Guelph General Hospital in 1900, prior to the structure of 1910. A Mercury article of 20 Oct. 1910 describes the previous residence as temporary and inadequate, having accommodation for 12 nurses of a staff of about 30. Despite its deficiencies, the existence of a residence may have lessened the urgency the Hospital Board felt about creating a new one.

In any event, the Hospital Board bought a property on Delhi Street for the new residence from a Mr. Winstone in 1906. By this time, the bequest had increased from $5000 to $7000 due to sound investment. The author of the article in the Mercury (21 June 1906) considered the property "ideal" because it already contained a spacious residence belonging to Mr. Winstone. The property also had a shed suitable for the Hospital's bovine employees:


On the adjoining lot is a comparatively new stable, which will provide accommodation for some of the hospital cows.


The implication is that the Board was considering modifying the Winstone residence to serve as the Forsyth and Hepburn Cottage.

For reasons unknown, this plan did not work and the Board elected to build a new structure on the property. The Winstone home and cowshed met an unknown fate. The old nurses' residence was bought by Johnston and Williams—the "brick and stone" contractors for the new residence—and was moved by them to a new location around the corner on the east side of Derry St. (Mercury; 16 May 1910). I wonder if it is still there.

The cost of the new structure was about $18,000 (Mercury; 10 Sept. 1910). As this amount is much higher than $7000 or so available, the city's Young Men's Association put on a campaign to raise the extra amount. An article in the Mercury (22 Sept. 1910) notes the advantages of the new residence for the nurses, as well as the hospital, and suggests the propriety of the campaign:


The young ladies who are devoting their lives to then nobler cause of nursing, after being engaged several hours in sick rooms, night or day, require a brighter dining room than they have hitherto been furnished with, and it is singularly appropriate that the young men of the city should take upon themselves the work of defraying the cost of bettering their surroundings in all respects.


So far as I know, the campaign was successful and the contractors and architects paid in full for their efforts. At last, after a decade, the nurses had a decent place to stay during their training at the Hospital.

In due course, the new residence was immortalized as a postcard. This particular card was mailed from Leamington with the following message:


Jan. 27/15 // Dear friend :- Sorry to hear you are sick. Called your people last night. We are going to have a cake and tea social at Stillman to-night. Hope you are improving. J.


The addressee was "Miss Rosa Devereux, c/o Miss Simpson, Grace Hospital. Detroit, Mich." Considering that the recipient seems to have been a patient in Grace Hospital, perhaps the selection of a postcard featuring a Nurses' Home was a way of suggesting care and concern.

As for the Nurses' Home today, it seems that its front yard may avoid being paved. Vesterra and the neighbours have hit on a plan whereby the condo residents may be able to park in a lot at 65 Delhi St., property that the city owns and is looking to sell. In honour of this close call, I suggest that the developer throw in a little plaque finally naming Mrs. Forsyth as the lady who launched this residence with her bequest over 100 years ago.

Posted by Cameron Shelley at 11:46 No comments: