The postcard below depicts two soldiers leaning on a wall, in perhaps a rare moment off duty, "somewhere in France", January 1917. They seem relaxed though serious, perhaps looking to assure family and friends back home that they are doing well—and remain in one piece. 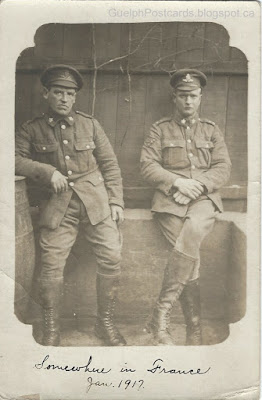 This card is a real-photo postcard, that is, a postcard printed from a photograph, usually in small numbers for sending to relatives back home. (Recall the card that Everett Raymond Dudgeon had made up in Guelph to share with his family back in Iowa five years earlier.) This card is addressed to Miss V.W. Stratton, 22 Baker St., Guelph, Canada. This suggests that the sender, presumably at least one of the soldiers, is a relative of hers.

No message is written on the back, perhaps to appease military censors. However, this surmise is confirmed by the note written lightly on the back in pencil, "43668 corporal". In fact, "43668" is the regimental number of James Lee Stratton, brother of Victoria M. Stratton of Guelph.

Stratton's attestation papers, which record his induction into the Canadian Expeditionary Force (CEF), say that he was born on 29 January 1891 in Straffordville, Ontario. His profession is listed as butter maker, he was unmarried, and had a military background, having served in the 39th Infantry in Simcoe and the 24th Grey's Horse in Ingersoll. He was 5 feet 7.5 inches tall, with fair hair and complexion, and light blue eyes. Looking at the photo above, I would say that this description matches the figure on the right. This attribution also gibes with the note that he is a corporal, since the figure on the right is the only one with a chevron on his sleeve.

Given his military background at a young age, it is not surprising to learn that Stratton was eager to join the CEF. His record shows that he joined the 11th Field Battery, 1st Howitzer Brigade in Guelph on 7 August 1914, only three days after the official entry of Canada, with Britain, into the conflict. He was transferred to the 1st Division Ammunition Column on 29 August and was inducted into the CEF at its camp in Valcartier, Quebec, on 25 September.

Here is a postcard of the encampment, showing the city of tents hastily erected at Valcartier for the initial marshaling of recruits.

At the camp, likely in view of his previous experience, he was promoted from gunner to bombardier. In October, he went with the first contingent of the CEF to England, to the Bramshott Military Camp. After training there, he was sent to France.

His records provide only a sketch of his long career on the Western front. However, it was eventful. For example, in 1917 he survived a mustard gas attack. Since this gas was first used by the German army in July of that year in the Battle of Passchendaele, this suggests that Stratton saw action there. The army doctor recounts Stratton's statement about his symptoms as follows:


In 1917 had mustard gas which burned chest following which was exposed to gas from shell holes for several days. Had loss of voice, sore eyes and cough. Recovered voice in a week. Since that time, has had attacks as described [above] whenever he takes ‘cold’.


He was allowed a week's leave in November, perhaps to aid in his recovery. How long, I wonder, did this breathing problem remain with him?

His medical records describe another minor injury in 1918:


In Feb. 1918, accidental blow from recoil of bolt in Lewis machine gun. Thumb was painful for about two months and stiffened so that flexion at distal joint limited.


It would be interesting to know why he was firing a Lewis machine gun instead of an artillery piece.

"Lewis light machine gun in use in the trenches on the Photo from Western Front during the First World War. An entire section of men was required to keep the Lewis in action, with ammunition carried in bulky panniers." Courtesy of the Canada At War blog.

His service record also reveals that he preferred being a gunner rather than advancing to higher ranks. In 1915, he was returned to the rank of gunner from bombardier at his own request. He was promoted back to bombardier in 1916 and to corporal in February of 1917. This detail helps to explain the single chevron on his sleeve in the postcard, which was (I believe) the uniform insignia appropriate to the rank of bombardier that he held in January. In October, he once more reverted to the rank of gunner, at his own request, where he remained until the end of the war.

The record does not state why he made these requests, so we can only guess that he preferred the job of gunner and was willing to take a pay cut to remain in that role.

Happily, Stratton survived the war and shipped out from England for Canada on the RMS Baltic on 29 April 1919. 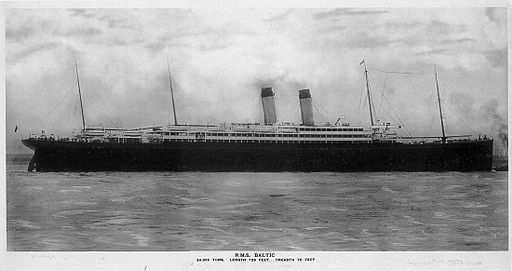 A postcard of the RMS Baltic/See page for author [Public domain], via Wikimedia Commons.

During the conflict, Stratton sent more back to Guelph than a postcard. He also signed over a significant portion of his pay —$25 per month—to his brother, Robert Stratton, who was co-owner of the Guelph Creamery Company, at 22 Baker Street. Robert Stratton was born in 1870 in Straffordville and is recorded in the 1904 Guelph City Directory at the Ontario Agricultural College (OAC) Dairy school. By 1910, he and George Taylor, a lecturer at the OAC, had formed the Guelph Creamery Company, applying knowledge they had acquired at the College to this commercial enterprise. At the same time, Miss Victoria Stratton, born in Straffordville in 1881, is listed as the new company's bookkeeper. The Strattons had arrived in Guelph!

The Guelph Mercury (8 April 1947) gives the following, brief history of the company:


The Guelph Creamery was built in 1910 by R.W. Stratton and G.R. Taylor and the first cream was delivered on New Year's day in 1911. The original staff was composed of the two owners and Miss V.M. Stratton, bookkeeper. ... In January 1921 Messrs. Stratton and Taylor purchased the Galt Creamery with Mr. Taylor going to Galt to be manager. On the 1st of June 1927 the partners Stratton and Taylor sold both their interest to the United Farmers Cooperative Co., Toronto.


Robert Stratton remained as manager of the Guelph creamery until 1942.

I believe that a piece of the back of Guelph Creamery's premises survives today as 30 Baker Street, which can be seen in the Street View image below.

So, James Stratton addressed this postcard to his sister Victoria at the Guelph Creamery location on Baker Street. You might wonder why he did not address it to his brother Robert. Perhaps he was following the custom of addressing correspondence to the senior woman of the destination (as Charles Mogk may have done with his postcard from the front), as letters were sometimes thought of as belonging to the domestic, and thus feminine, sphere.

It is interesting to imagine the joy and foreboding that would have greeted the photo as it was passed around in the building. Thank goodness James and his friend were still alive and intact! Would they remain so? Perhaps it was Victoria who penciled in her brother's regimental number and his new rank of corporal shortly after the postcard arrived in the Royal City.

After the war, Stratton had evidently had his fill of soldiering. Upon his return to Canada, he resumed the trade of butter maker. On 24 July 1922, he married Norma Jean Soper of Staffordville in Toronto. The marriage record lists his occupation simply as "manager". The couple had two children, a son and a daughter. The son, John Thomas, died at the age of three.

James Lee Stratton died on 14 July 1969 and was buried in Straffordville/Sandy Town cemetery.

Perhaps it is Charles or Robert Hack. The Hack boys were Guelph residents who joined the CEF at the same time as James Stratton and shipped out to England in the same unit, that is, the CEF Divisional Ammunition Column, No. 2 Section. Both are described as having fair complexion and brown eyes and hair. Charles was 5 feet 6 inches tall. Robert was 5 feet 9 inches.

My only evidence for this guess is that the Hack family was well known to Victoria Stratton. Victoria roomed at the Hack family residence at 22 Green Street, and Florence and Lila Hack, sisters of Charles and Robert, both worked as bookkeepers and stenographers at the Guelph Creamery Company. In other words, the Hacks and the Strattons were well known to each other.

So, it could be that Charles Hack and James Stratton found themselves at the same stationary store somewhere in France, saw a sign in the window offering photographic postcards, and realized they had found a classy way to assure the family back in Guelph that they were OK. A two-for-one deal!

It makes for a nice story but it remains just a guess.

Posted by Cameron Shelley at 17:40 No comments: