In 1910, as it had been for many years, the season began with concerts on the occasion of the old Queen's birthday, May 24th, known better as Victoria Day. As usual, the Guelph Musical Society (GMS) Band put on a good show (Mercury, 25 May 1910):


The G.M.S. Band as usual made its first outdoor appearance for the summer season on Victoria Day with its new conductor, Prof. Philp in the lead. An hour’s performance was given on the Trafalgar Square stand from 10 to 11 and a forty-five minute programme in front of the City Hall steps. There was a large turn-out of players and, seldom, if ever, has the band appeared to better advantage at a start of the season.


The report noted the particular distinction of the brass section, one of the best in the nation, in the view of the reporter. The reed section was not so strong but this issue could be rectified if some better musicians could be hired for this purpose. Not that being in the band paid all the bills. Band members were paid for their performances but this income was not enough to live on. When the band found someone they wanted to induct, a job in a local factory under music-friendly management could usually be secured for him.

Perhaps just prior to its performance on the old City Hall steps, the band posed for a group photo, as was apparently its custom. Some copies were printed up as postcards ("real-photo" postcards), one of which is shown below. 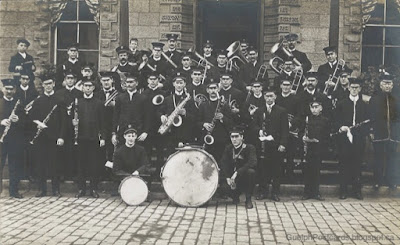 This card was sent by "Earnie" to Miss Sarah Cartledge at 37 Glouster St. in Toronto on 10 October 1910. It shows the band arrayed across the steps of the old City Hall, uniforms on and instruments at the ready. It was taken no earlier than May 1910 as it shows bandleader William Philp on the right-hand edge, who joined the GMS in that month. Also, the windows on either side of the doorway have Union Jacks hung in their upper reaches, with the middles cinched up, a decoration normally reserved for civic holidays, especially Victoria Day, Dominion Day, and Labor Day. My guess is that the photo was taken at the first opportunity, namely Victoria Day.

In "Bands of music in Guelph," Ross Irwin explains that Guelph has had musical bands since about 1845. In 1847, on the occasion of obtaining its first fire engine, the Guelph Fire Company laid on a concert featuring George Sunley's Brass Band. Its efforts were much appreciated, reported the Guelph Herald (30 Sep. 1847):


Many of the toasts were accompanied with appropriate Airs, by the very efficient band of Mr. George Sunley, which were in attendance and discoursed most excellent music, greatly to the delight and amusement of the evening.


Through the ensuing years, music for special occasions or just general entertainment was provided by private groups, military bands, or some combination. In 1878, the City Band was formed when the City Council started contributing money to the effort. After the Guelph Musical Society was formed in 1898, the City Band was renamed the Guelph Musical Society Band, a name that lasted until 1968.

We have a pretty decent record of the GMS Band activities in that era due to the diary kept by Arthur Parker, the bass drum player who joined in 1904 and quoted extensively in Irwin (1993). Mr. Parker is likely the young man squatting to the right of the bass drum in the front row of the photo above.

The year 1910 did not begin on a high note, according to Mr. Parker. The bandmaster, Frederick Stares, was "lost" in January of that year due to "bad conduct." Unfortunately, Mr. Parker does not elaborate and newspaper records of that time are also lost, so it is not clear what conduct he is referring to. In any event, bad conduct is no good in a conductor, so Mr. Stares returned to Hamilton and the Band managed to entice William Philp to take on the role.

Hiring William Philp had to be considered a coup for the Band. Born in 1842 in Cobourg, Philp started his musical career early (Daily Mercury, 14 July 1923). He began violin lessons at the age of eight and was teaching that instrument by the age of seventeen. He also learned to play the piano and organ.

He was still a teenager when appointed as the bandmaster of the 57th Rangers of Peterborough. In this capacity, his band and the band of the 60th Rifles performed for the Prince of Wales, later Edward VII, at Cobourg in 1862. He later moved to Port Hope, where he continued to be a bandmaster, while also giving piano and violin lessons. In addition, he joined the Rochester Conservatory of Music. In those days, two steamboat companies laid on trips between Port Hope and Rochester, three times a week. Passengers on each trip were entertained by live bands, so there was certainly a demand for good musicians. Above is a photo of William Philp, date and provenance unknown, reproduced by kind permission of John Philp. (Cf. Guelph Civic Museums 1986.33.16) This picture may show William Philp in the uniform of the 13th Hussar Regiment, which he joined in 1872 upon their arrival in Ontario in response to the Fenian Raids (Mercury, 14 July 1923):


At the time of their arrival the Professor was taking a course at the Toronto Military School, and as he had always been fond of horses, he couldn't resist the temptation to enlist, so joined up with the English regiment, and was with them until they disbanded in 1875, when he was given his discharge.


In 1877, Philp visited Guelph to judge a band competition sponsored by William Bell, the organ and piano manufacturer. Showing sound judgement, Philp took a liking to the Royal City and solicited the position of choirmaster at the Dublin Street Church. In addition, he became bandmaster of the Wellington Field Battery band.

Philp was enticed away to Winnipeg in 1882, then moving on to Sarnia, Chatham, London, Charlottesville, Virginia, and Waterloo. Upon Fred Stares' departure, Philp (now styled "Professor Philp") was recruited back to Guelph through the good offices of Billy Jones and George Sleeman. The hiring of such an accomplished and reputable bandmaster was a "red letter day" for the Royal City. 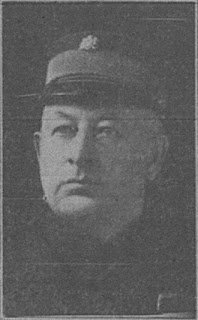 The year 1910 was a good one for the GMS Band. It played many engagements and acquitted itself well. Arthur Parker notes that he made $50 playing for the Band that year, about $5 more than previous years, which suggests that Prof. Philp got off to a good start.

Prof. Philp led the GMS Band until 1923, when he took a leave of absence for his health. His second wife, Mary, died later that year. He passed away on 30 June 1925, having devoted so many of his 83 years to music, about 15 of those in Guelph. He is buried in Woodlawn Cemetery.


The Guelph Civic Museums archives hold other group photos of the GMS Band from around the same time as the postcard above. 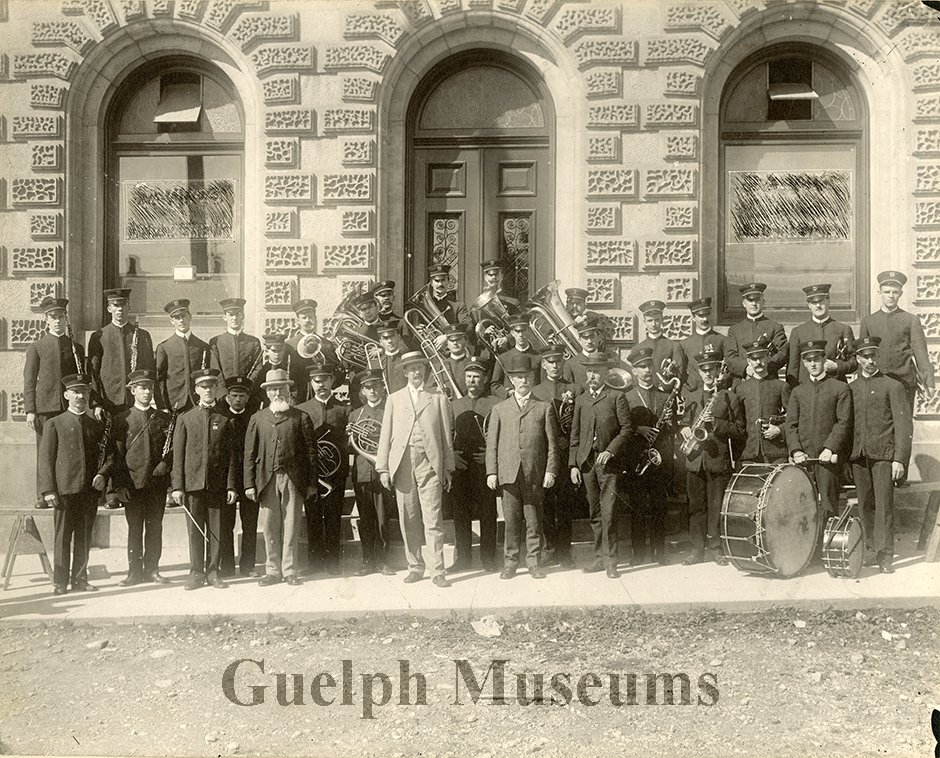 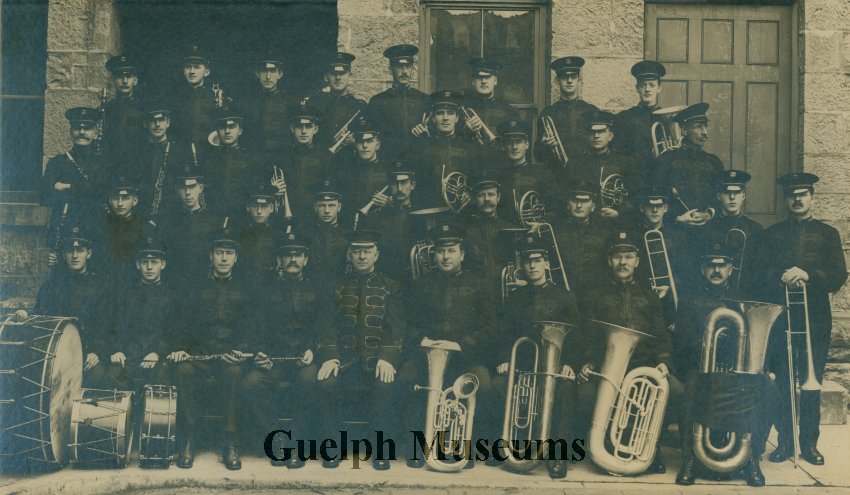 Herbert William Philp, one of Prof. Philp's sons, fought in the Great War and died of the consequences in 1920.

Posted by Cameron Shelley at 14:50 No comments: