Currently known as the "Homewood Health Centre", Guelph's place of refuge for the afflicted and addicted began as the Homewood Retreat on 18 May 1883. The Retreat was the first wholly, privately owned sanitarium in Canada. The prime movers of its establishment were A. J. W. Langmuir and E. A. Meredith, both of whom were former inspectors of asylums in the Province of Ontario.

They were motivated by both humanitarian and commercial interests. Langmuir thought that a private institution might be able to enact reforms in the care of patients that were not practicable in government institutions (Sanitarium 1983). At the same time, Canadian patients who sought a higher level of comfort and service were traveling to the United States for care. A local institution would keep that revenue in the country and make a profit for the shareholders (Hurd et al., 1917).

Finding a suitable location was crucial to the success of the venture (Sanitarium 1983, p. 1):


[Langmuir] conceived the idea of a private psychiatric hospital, preferably outside of the pressurized life of the big city of Toronto, yet near enough to be accessible by railway or road for horse-drawn vehicles.


Toronto, apparently, was not a good place for people to find rest and recovery. Besides which, land would be more affordable out in the countryside.

However they did it, Langmuir and his associates located an ideal site about one mile north of the centre of Guelph. The 19-acre property epitomized the ideals of the Picturesque. It contained the crest of one of the city's many drumlins, one that commanded an excellent view of the Speed River. In addition, a large and romantic residence sat along the hilltop. This house was "Craiganour", the former home of Donald Guthrie, once the local Member of Parliament, who named it after his birthplace in Scotland.

Craiganour was made of local stone and built in the Italianate idiom then very popular in the country. Notable features include the paired windows with rounded heads, the belvedere in the projecting tower and the broad awning over the porch that stretched around two sides of the structure. The effect was meant to be impressive but, at the same time, inviting. It is a great shame that it was destroyed by an electrical fire in January 1911.

The old building can be seen in the following postcard printed by Rumsey & Co., ca. 1910. 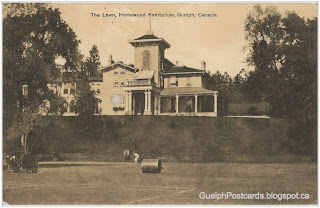 Although the building dominates the photograph, it is the grounds that are the centre of attention. The broad lawn is impressively flat, an observation reinforced by the substantial roller in the middle. Several figures are seen at the edges of the lawn, perhaps preparing to play tennis or croquet. To the left, a stairway can be seen connecting the lawn with the main building.

The site and grounds proved helpful in the rehabilitation of patients. Clearly, outdoor recreation was an important part of the therapy. A report on the facility in the Toronto Globe mentions lawn tennis and quoiting ("The Homewood Retreat at Guelph described," 27 April 1901). The Industrial Number of the Mercury also mentions "cricket creases" (1908). In addition, there are photographs of patients playing bowls on the broad lawns (Sanitarium 1983, p. 18). In fact, a game of bowls on the lawn appears in another postcard, this one published by the International Stationary Co. of Picton also around 1910. 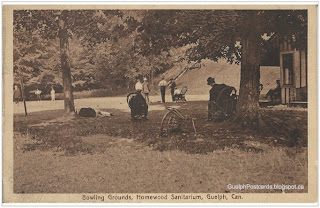 One thing that I enjoy about many of the postcards from this publisher is that people are integral to the photographs. (Look through previous postings to see other examples.) Here, interest in the scene consists of the postures and arrangements of the people in it. Several men sit at their ease in stick furniture while others stand about apparently discussing the play. One lies recumbent on the ground to one side, echoing the posture of the chair in the middle foreground. It is a quiet and even indolent moment.

Besides gaming and sporting possibilities, the grounds offered opportunities for the simple enjoyment of water and greenery. Visitors never failed to notice the beauty of the site and its therapeutic potential. A Globe article on the opening of the institution describes them thus ("The Homewood Retreat", 31 May 1884):


On each [patient's] flat is an alcove with large bay windows facing south, so as to receive the sun for the greater part of the day. From these windows the prospect is a delightful one. The greater part of the twenty-acre park surrounding the building spreads out in front, stretching down to the River Speed, which forms the southern boundary. Glinting patches of the river's surface are seen, changing always as the gently moving leaves close or broaden the view. Dazzled with the brightness, the eye seeks relief and finds it in the sunny or shaded green of the grove, lawn, and meadow.
...
A ramble in the grounds was almost a day's outing. The trees are all strong and beautiful and the grass close and of healthy growth. At the rear of the house are the vegetable garden and orchard, also the stable and stable-yard.


There is one postcard that may capture a view of the Speed near this place. It is labelled simply "River Speed" and was published by Valentine & Son’s sometime around 1905. 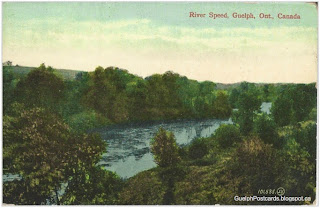 The course of the Speed and the shape of the hill opposite are appropriate for a photo taken from the Riverslea estate, built originally by James Goldie and now on the Homewood grounds a little south of the original Homewood. The vista from the belvedere at the Homewood Manor might have been similar.

Another interesting description was given in a letter sent by "Veronica" to a column called "Circle of Young Canada" in the Globe (1 April 1916). In the letter, Veronica describes the scenery where she lives in Guelph:


I'm sure you'd all admire the view from our front windows. I'm not a very good painter of pen-pictures, or any other kind for that matter, but will try to describe it to you. Our house is at the head of a little street that runs down to the River Speed, so we have a clear view of that stream. The other side of the river is closely wooded and the trees were a picture when they were turning all colors. The Homewood Sanitarium is on top of the hill, and every day as the leaves fall we discover new buildings that couldn't be seen before. One of the buildings is called "The Manor" and looks just like an old English home situated in a large park. The scenery all around is beautiful also as there are hills in every direction, either wooded or laid out as farms.


Perhaps Veronica lived near the intersection of Strange (now Dufferin) St. and Clarke St., which affords a decent view of Homewood from across the river.

Besides surveying the Homewood grounds from her window, it may be that Veronica could have explored them readily on foot. A foot bridge had been built across the Speed for the use of patients to get to Homewood from the C.P.R. line on the other side of the river (Sanitarium 1983, p. 8). It was used as such by a special delegation from the Canadian Medical Association in 1910, who were entertained with a buffet luncheon on the lawns.

(This bridge was swept away in the flood of 1912, and it is unclear whether or not it was rebuilt. There is also mention of a foot bridge near Riverslea that existed "within memory of some older Homewood employees" but was removed due to decrepitude; Sanitarium 1983, p. 8).

The Homewood grounds continue to be an important part of the facility and of the greater community. It is, for example, the site of a "horticultural therapy program". Patients learn how to plant and maintain a vegetable garden, which is therapeutic in itself and brings them outside where they can enjoy their surroundings ("Homewood garden part of food production project", Mercury, 16 July 2014):


Currently the garden grows on a roughly 190-square-metre piece of land, surrounded by the centre's beautiful lawns, woods, trails, and historic buildings.

[Program director Tami] Proctor said patients started all of the garden plants from seed and transplanted the seedlings just over a month ago. "It's a true seed-to-table garden," she said.

"This teaches people how to plant a garden," she said. "Some have never planted before, and it gives those with gardening experience the opportunity to really shine and share what they know."

A garden, she said, acts as a "grounding tool," helping patients reconnect with nature, with their senses, and with a sense of inner peace. Digging in the dirt, hearing the surrounding sounds, engaging the sense of smell and taste, is all therapeutic.


The idea is reminiscent of the original idea for the Guelph Correctional Centre, in which prisoners were to be given agricultural tasks to perform in order to detach them from their fondness for alcohol.

Unfortunately, the future of the Homewood grounds may be in question. The current owner, Schlegel Health Care Inc., has applied to the city to sever a number of the lots on the property ("Committee of Adjustment", 12 June 2014). Although no permissions have been granted, it may be that some of the Homewood estate is headed for the auction block. Whether or not that would be a good thing remains unclear, but it would change fundamentally the character of that well-trodden terrain.

26 April 2016:
Schlegel's plans for Homewood portend big changes for the site, or sites. See the Friends of Homewood Grounds website for more information.

Also, see rych mill's Flash from the Past column for more history of the site and institution.