Who had a hand in the planning of Guelph?

If you did not grow up in Guelph, then, like me, you may remember in your early days trying to figure out the arrangement of streets downtown. There are several points where streets converge in an unusual way. Norfolk Street begins at a dog-leg intersection with Gordon St., Wilson Street, Waterloo Avenue and (formerly) Essex Street. It then meets Quebec Street, Yarmouth Street, and Paisley Street at its middle point. Finally, it is cut off at Norwich Street where it meets, and is continued by, Woolwich Street. Further east, when moving up Wellington Street, you pass under a railway bridge and find yourself veering left and on Woolwich Street.

Trying to form a mental map of the area takes a while. Sometimes, it helps to make a drawing. That is what one newcomer to Guelph did on the back of a postcard sometime around 1910, as you can see below. 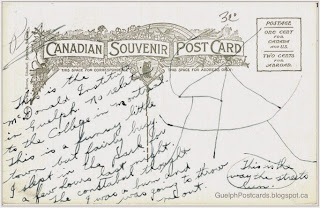 The front of the card has a picture of the MacDonald Institute at the O.A.C. However, it is the back of the card that matters here. The message reads:


Peg/ This is the McDonald Institute in Guelph. No relation to the College in Montreal. This is a funny little town but fairly busy. I slept in the park for a few hours last night. The constabul [sic] thought I was a bum and was going to throw me out. This is the way the streets run.


(Actually, the Macdonald Institute was funded by the same Sir William Macdonald who funded the MacDonald College in Montreal but that is another story.) Besides the vigilance of the constabulary, our unnamed author was clearly impressed by the street layout while walking around the downtown. The result looks a little like a spider web. If you are familiar with the city, see if you can identify the streets.

Frankly, I cannot quite make it out. Not having the scale, orientation, or any street labels does not help. Certainly, I would not use it to give directions. In any event, the general impression is enough: Downtown Guelph is both circular and triangular at the same time.

One of the reasons for this unusual layout is that the streets were designed to radiate outwards from a focal point, that being the site where John Galt and his party chopped down the maple tree to launch the town. That site is near the current intersection of Wellington, Macdonell and Woolwich Streets. At the time the postcard was written, Wellington had not been extended to that point. Instead, Woolwich Street began at Priory Square, where it met Quebec Street, Macdonell Street, the Market Square, and Waterloo Street (now Fountain Street). Check out this detail from the 1892 map posted in the Main Branch of the Guelph Public Library. Priory Square is in the lower right corner, bisected by the railway line. 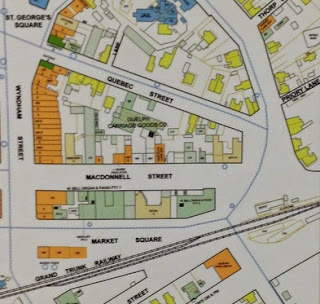 With a little imagination, the map looks almost as if someone had traced the fingers of their left hand to make up the street layout, with Woolwich as the thumb. In fact, this idea was a long-standing myth about the founding of the Royal City. Guelph was officially founded on April 23, 1827 (St. George's Day) when John Galt, in the presence of a party from the Canada Company, chopped down a maple tree near the banks of the Speed near the present day intersection of Wellington and Woolwich Streets. The Annals of the Town of Guelph relates the rest (Burrows 1877, p. 12):


It has been stated that after the tree was felled Mr. Pryor laid his hand upon the stump, and stretching his fingers as far apart as possible, indicated the direction in which the streets of the new town were to be laid out.


Charles Prior was a builder that Galt had hired to oversee construction of the first buildings of the town. If the story about Mr. Prior's hand seems implausible to you, then the author agrees:


... it is scarcely reasonable to suppose, either that a man of Mr. Pryor's well-known intelligence and scientific attainments would adopt so rude a method of laying out what was intended to be a large and important city, or that Mr. Galt would have countenanced such a proceeding.


Gilbert Stelter points out that the real story of Galt's town plan for Guelph is more complicated. Among other things, Galt wanted the streets to converge on the site of the tree stump in order to emphasize the importance of the Canada Company buildings, such as the Priory, that were to be located around it. Immigrants to the town, arriving across the Speed from York to the east, would perceive the centrality of the place through the very lay of the land.

In fact, as Stelter notes, Galt's original plan was more fan-like than hand-like. However, after his departure, the Canada Company changed the plan, selling some of the space designated as public by Galt and thus making Woolwich Street look more like a thumb. Later, the site was bisected when the city sold some of it to the Grand Trunk Railway for a bridge abutment.

Today, if you would like to see the site of the town's founding, you can look at the side of that abutment:

The plaque on the side of the abutment reads:


This tablet marks the spot where John Galt, general agent of the Canada Company, cut the first tree in founding the city of Guelph, April 23rd, 1827.


As the Square was reduced and bisected, the rationale for it became obscure. Thus, its configuration, and the radial plan of the streets seemed increasingly arbitrary, perhaps lending credibility to the myth of Charles Prior's hand on the stump. Stelter notes that the story was repeated for years at the Guelph Civic Museum, which perhaps helped it to live on. In any event, the curiously configured streets of downtown Guelph live on also, somewhat to the puzzlement of new arrivals to our funny little town.
Posted by Cameron Shelley at 13:01 No comments: