This postcard shows a view across the Speed River in downtown Guelph. As the label says, the house in the photo is the "Birthplace of Laura Lemon, Author of 'My Ain Folk', Guelph, Ontario, Canada 9." 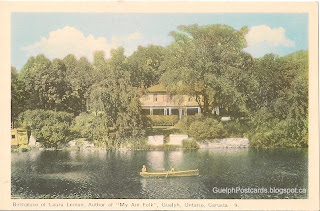 The postcard was made by the Photogelatine Engraving Co., Limited, Ottawa, denoted by the acronym "PECO" in a maple leaf, as printed on the back of the card. I do not have much information about this company, but they produced many Canadian postcards, seemingly between 1920 and 1940. The picture also appears in a Valentine & Sons postcard, so it may have been taken in the Edwardian era.

A brief article in the "Historic Guelph" (vol. 2, no. 5) provides some interesting information. The house in the card was known as "Mavis Bank", and Laura was born there on Oct. 15, 1866. (Here is a photo of her.) In 1871, the family moved to a house called "Ashcote" on Queen St., where they entertained the Marquis of Dufferin, then Governor General of Canada, in 1874.

Clearly, the Lemons were a prominent family in the city. Her father was Andrew Lemon, Queen's Council, and a partner in the law firm "Lemon and Patterson". Her mother was Laura Armstrong, after whom she was evidently named. In 1873, Lemon St. on Eramosa Hill was named after Mr. Lemon (Irwin, 2008, p. 47). Unfortunately, he appears to have speculated in some railway venture and lost, prompting the family to move to Winnipeg in 1881.

Laura must have displayed musical talent early, as she travelled to London to study at the Royal Academy of Music in 1890. The article has this to say about her abilities:


Laura was a fine musician and her piano playing was really magnificent. She is said to have had the ability to make the piano sing. While many of her compositions are Scottish in theme or title, she never set foot in Scotland.

The continuing popularity of "My Ain Folk" is apparent from a YouTube search, which turns up over 7,500 hits. Here is my favorite rendition:

Laura Lemon passed away on August 18, 1924, which may have prompted PECO to reproduce the card. It shows the Speed in summertime, with Mavis Bank in its verdant setting on the river's edge. Of special note are the trellis posts of the verandah, characteristic of Picturesque architecture in the second quarter of the nineteenth century. Today, the site lies across from the River Run Centre, so there is no Street View image that matches the photo. However, a similar view can be had from the Royal Recreation Trail along the riverside, as you can see here: 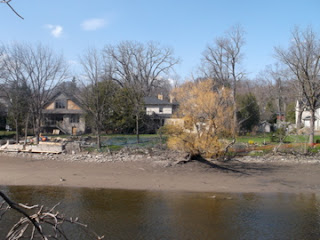 This photo was shot in April, 2013, with a lower water level. The greenery is not yet out, but the house and verandah are more visible that way.

Mavis Bank is now part of a three-residence complex, at 72–78 Arthur St., the front of which you can see in the Street View image below.

Note the treillage on the verandah posts at the right, which maintains the type found on the structure when the postcard photo was taken and when Laura Lemon lived there.

Laura's songs were aimed at contemporary tastes and so have since faded from attention. However, the third Moravian Dance, "No. 3 Mazurka", has been included in a recent collection of Canadian works, Romance: Early Canadian chamber music (iTunes). So, enjoy! and think of Laura Lemon, one of the many Canadian musicians who left her old haunts and went abroad to make good on her career.

Posted by Cameron Shelley at 13:24