The Royal City and the Royal Coronation, 1911

Any year has its beginnings and its endings and 1911 was no exception. In the British Empire, it was perhaps most noted for the beginning of a new era with the return of a King George to the British throne. The previous year had seen the death of King Edward VII and, with it, the end of the brief Edwardian era. Edward was succeeded by his son, King George V, whose coronation was set for 22 June 1911.

Naturally, the loyal city of Guelph was eager to celebrate the new king of the House of Guelph. In 1902, Guelph had sent some dignitaries and military men to England to take part in the coronation of King Edward. So, it was thought fit and proper that the same should be done for the coronation of the new King George.

In the end, 706 Canadian dignitaries and military men were rounded up and shipped across the pond by the Dominion. They went in style aboard the Empress of Ireland, a cruise ship of the Canadian Pacific Steamship Company. This ship was the one that would sink to the bottom of the St. Lawrence on 29 May 1914, taking 1,012 lives with her. However, she sailed from Quebec City on 2 June and arrived in Liverpool without incident.

The SS Empress of Ireland from a contemporary postcard/Courtesy of Wikimedia.

Similar groups arrived in Britain from all over the Empire. The military men bivouacked at the euphonious Colonial Coronation Contingents Camp, Duke of York's School, London.

The contingents were assiduously recorded in photographs that were printed up as postcards. Happily, a postcard probably featuring the visiting Guelphites was sent back from the old country. 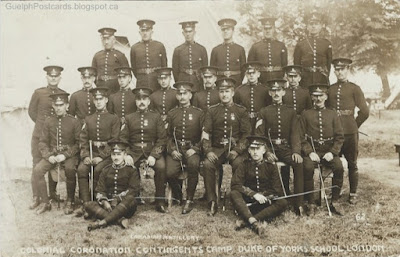 The message on the back reads simply, "Certainly a fine trip & lots of spare time. // B B Mc." The addressee was "J. Vertigan, Esq // The Armouries" in Guelph.

Here is another beginning, for the Armouries in Guelph had been officially opened only two months earlier! Joseph Vertigan is listed in the city directory as a caretaker there. It seems the postcard was addressed to him by the cryptic Mr. B B Mc. 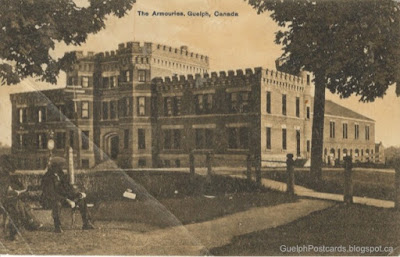 The bad thing is that Guelph newspapers for this event are missing, so our information about the contingent is limited. The good thing is that the passenger manifest of the Empress of Ireland still exists and lists the points of origin of its passengers, including those from Guelph! They are as follows:


The saloon passengers were the civilian dignitaries, who, therefore, spent much of the voyage in the saloon.

It was quite an honour to be selected for this event, so it is interesting to find out about the people who were picked.


Mayor and Mrs. George Thorp also attended the coronation as part of a European tour they went on. However, they were sent by the Town of Guelph instead of the Dominion, and so did not voyage with the others.

I presume that many or all of the Guelph military party is present in the postcard above. However, I do not presently have any other photos of the people involved, so I am unable to say who is which or which is who. Perhaps some educated guesses could be made by matching people's ranks to the insignia on their uniforms. If you can shed any light on the subject, please do so in the comments section below!

The coronation went off on 22 June without a major hitch. The colonial contingents marched in the procession before the royal couple, assumed positions near Westminster Abby, and stood to attention as the royals entered and later exited.

The coronation ceremony marked a number of firsts. For example, it was the first coronation in which the service within the Abbey was allowed to be photographed. 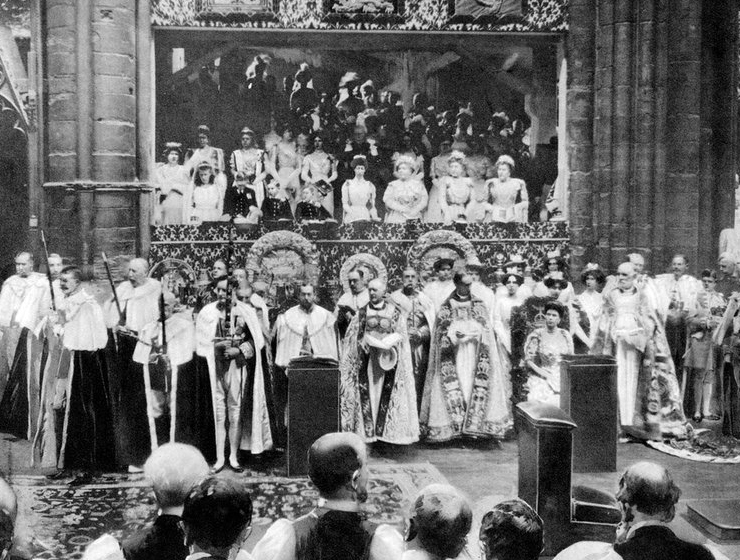 King George V and Queen Mary seated on the Chairs of Estate in front of the royal box at their coronation in 1911. By Benjamin Stone/Wikimedia commons.

My favourite technological first for this coronation would have to be how the newly anointed monarch contrived to the lay the cornerstone of the Fisherman's Institute in St. John's, Newfoundland (Globe, 22 June 1911):

In spite of the pressure of the Coronation ceremonies, King George will find time Thursday to participate in the laying of the corner stone of the new Fisherman's Institute to be erected here by Dr. Wilfrid T. Grenfell. It will be at His Majesty's word, sent over the cable, that Governor Ralph Champney Williams, of Newfoundland, will place the stone in position. Arrangements have been completed for special telegraph and cable connection between Buckingham Palace and the site of the structure in St. John's.

Huzzah! What a signal demonstration of the electrical sinews of the Empire!

In the Royal City, the coronation was celebrated in royal style. A series of athletic contests were held in and around Exhibition Park (Globe, 23 June 1911). The Guelph Shamrock lacrosse team was narrowly exceeded by the Brampton Excelsiors, 3–4. A series of races were held, including sprints, races for whippets, boys on ponies, and a five-mile motorcycle race. The Guelph baseball team travelled to Berlin (now Kitchener) and spit a double-header against the Dutchmen.

A first for Guelph was the inauguration of the city's first, incandescent street-lighting system. The Fire, Light and Markets Committee of the City Council teamed up with the Light and Heat Commission to install the system. At 10pm sharp on coronation day, the downtown was lit up as never before (Globe, 23 June 1911):

Wyndham, Carden, Macdonnell, Quebec, Norfolk and Woolwich streets were made as light as day by the fine lights, and, the effect was very pleasing. Citizens generally expressed their entire satisfaction and approval of the new system, which will hereafter be lighted every night and all night.

Thanks to Niagara Power, courtesy of the new Hydro-Electric Power Commission of Ontario set up by Sir Adam Beck, the future of the new era seemed bright indeed. Since posting this piece, I came across the following information about B.B. McConkey, which clarifies the circumstances of the action that earned him the Military Cross at Vimy Ridge (Mercury, 12 Dec 1918):

Mrs. B.R. McConkey has received the Military Cross awarded to her son, the late Capt. B.B. McConkey, M.C. The statement of the award, which came with it, is as follows: “Lieut. B.B. McConkey, C.F.A. as F.O.O. for his battery with two N.C.O.s this officer laid a telephone line from Lichfield Crater through Volker Tunnel to Thelus Mill, during the operations against Vimy Ridge, on the 9th of April, 1917. Getting ahead of the mopping up Bn. they were held up by a barricade and a machine gun in the tunnel. They overcame this opposition and after handing over 12 prisoners to the infantry, they established an F.O.O. station in Goulot Wood in time for the next attack. When their lines were cut they continued to send back timely information by runner, showing initiative, perseverance and gallantry.”