Although Valentine's Day cards date back to the Georgian period, the business of sending love tokens to that special someone really got going in the Victorian era. The establishment of the penny post plus the industrialization of card-making meant nearly anyone could let fly one of cupid's arrows through the mail.

Naturally, some of the earliest picture postcards made in the Edwardian era were also Valentine's Day cards. As such, many lucky young ladies of Guelph and area received these cards from their secret admirers. One such woman was Miss Maude Powers of Speedside. Evidently, she was quite a peach, if the following, anonymous postcard sent 12 February 1906 is any indication: 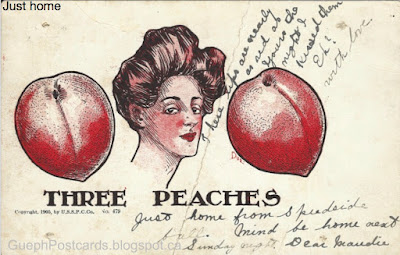 This card was one of many cards for special occasions printed by the United States Souvenir Post Card Co., New York. On the front is a message attesting to the ardor felt for Miss Powers by the sender:


Just home from Speedside ball. Mind be home next Sunday night. Dear Maudie. These lips are nearly as red as yours the night I kissed them Eh? with love.


In an era long before text messages and emojis, young men could select among such novelty postcards to convey their feelings. Clearly, "Maudie" had made an impression.

Valentines Day, 1906 was not even the first time Maudie's suitor had reached out to her in this way. An earlier postcard addressed to her and written in the same hand was posted on 28 December 1905: 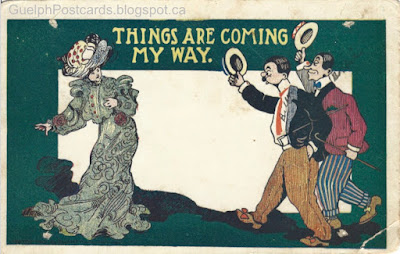 The writer has taken the trouble to add the labels "Billie" and "Bobbie" to the gentlemen on the right-hand side. This postcard was a generic card published by J. Raymond Howe of Chicago. Both cards are unsigned, so it remains unclear who "Billie" and "Bobbie" might be. However, both cards were sent from Guelph, so perhaps they were citizens of the Royal City.

The year 1906 presented Miss Powers with quite a dilemma, for she was the recipient of further amorous postcards from at least two more suitors. Here is one sent to her in Toronto from Eramosa on 10 May 1906: 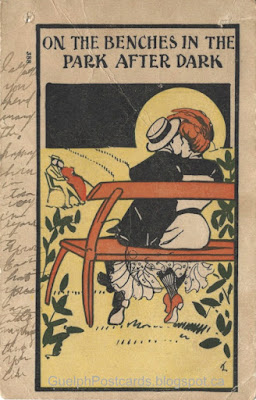 Written in a different hand from the first two, this racy, unsigned card bears a nearly illegible scrawl in the margin about talking to Maud's Easter hat. What tales those park benches might tell if they could speak!

To complete the triad, here is another card, written in yet another hand, also addressed to Maude Powers in Speedside: 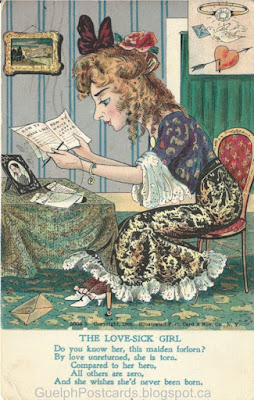 Published by the Illustrated Post Card & Novelty Co., N.Y., this card depicts a young woman reading a brochure on "How to make love" (an expression that then meant something like "to woo" does today) and "How to write a love letter." On the back, her suitor has penned the message:


Now is your chance. Leap Year next week. A.B.G.


A.B.G. has taken the interesting tack of putting himself on a pedestal and inviting Miss Powers to reach for the top. Subtle!

The postcard was cancelled on the "Harrisburg-Southampton RPO", meaning that it was processed in the mail car of a train that went between Harrisburg (near Paris) and Southampton, a route that went through Guelph. The postcard was cancelled on "Jan 2, 0_", with the last digit being illegible. Given that no Leap Year ever occurred in January, A.B.G.—whoever he was—had evidently read a book on writing love letters that specified speaking in riddles. I will assume the year was 1906, since that seems to have been Miss Powers' lucky year.

I do not know much about Miss Maude Powers. She was born the on 6 January 1885 as the eldest daughter of Walker Powers Jr. and Elizabeth Powers, somewhere in the vicinity of Speedside. So, all this attention was paid her around her 21st birthday.

The Historical Atlas of Wellington County (1906) mentions that Walker Powers Sr. was an immigrant from Vermont who settled in Clarke Township, Durham County. Maude's father, Walker Jr., was raised there but moved to Eramosa Township in 1873. There, he courted and married Elizabeth Johnson, from a family of Eramosa pioneers, and raised Percy, Carrett, Maude, and Hetty.

Maude was deliberate in her choice of husband. Two years after this flurry of attention, she set her cap at Alexander Rae and married him on 17 June 1908. He was born on 18 December 1878 in Eramosa Township to Alexander Sr. and Sarah (née McLean)

Alexander may have been bachelor number two, that is, the sender of the postcard "On the benches in the park after dark", since that was posted in Eramosa where he lived. That seems like the best guess at present. Perhaps it could be checked if I ever find an example of his handwriting.

Alexander Jr. was a blacksmith. Around 1912, he and Maude moved to Guelph and set up Rae’s Wagon & Body Works at 39–41 Cork Street, about mid-block on the south side.

With the advent of the automobile, it might seem unfortunate that someone should put out his shingle as a blacksmith. However, Rae's business was a success. Perhaps this was because he took on a variety of work, as suggested by this ad in the 1915 City Directory: 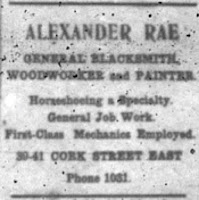 The couple first lived on Surrey Street (West) but soon relocated to 65 Cambridge Street, which I believe is now number 11 (shown below in Google Street View).

By 1930, the business had moved to 43 Yarmouth Street while the family, which included children Margaret, Henry Alex (Jr.), Isabel, Caroline, and Eleanor, had moved to 11 Charles Street (shown below in Google Street View).

Margaret and Isabel worked as bookkeepers in the family business. Eleanor became a corporal in the Canadian Women's Army Corps during World War 2. Alex Jr. upheld family tradition and became a blacksmith.

Alexander Rae was elected a city Alderman in the years 1929 through 1932, inclusive, which were difficult years due to the Depression. He was also a member of the Scottish Rite, the Orange Order, and the Independent Order of Odd-fellows. He died in his home on 30 November 1942 after a prolonged illness (Mercury, 30 November 1942).

Alex Jr. took over the family blacksmith business for a number of years. Maude remained in the residence on Charles Street until she died on 22 July 1956. She and Alexander are buried in Woodlawn Cemetery.

A jolly time could be had in the Royal City on Valentine's Day in 1906. For example, one might attend a "house social" like this one (Mercury, 14 February 1906):


The young ladies of the Disciples of Christ entertained last evening in the home of Mrs. Harris, Yarmouth St. The rooms were beautifully decorated in honor of St. Valentine. Various amusements, interspersed with vocal and and instrumental music lifted up the hours. Not the least interesting feature was the art gallery, containing some thirty old masterpieces. Ice cream and cake were served. Each feature of the programme was made the occasion for levying a tax of two cents per head. Much credit is due to the young ladies for the pleasure afforded by the evening's entertainment.


For those more determined to flirt, there were always the city's skating rinks. Guelphites could skate on cleared areas of the Speed River, in special outdoor facilities such as the streetcar rink (now Howitt Park) or indoor rinks such as the Victoria (now a parking lot behind Knox Church).

Howard Shubert ("Architecture on ice: A history of the hockey arena", 2016, pp. 21–24) explains that skating rinks became prime places for flirtatious encounters. Skating was regarded as a suitable activity for both men and women. Men could display their vigor and bearing whereas women could cut pretty figures in the ice and show a little ankle—dresses had to be shorter to allow for skate boots and striding.

Even in the mid-Victorian era, skating in Canada allowed for more than the usual touching between the sexes. A man could hold his lady's hand, to help prevents falls, of course. Also, helping a girl on with her skates was not merely gallant, as suggested by this passage from "The admiral's niece, a tale of Nova Scotia" (1858):


In two hours more numerous skaters were gliding over the Arm, and soon after luncheon the Governor and Lady D— did make their appearance, accompanied by the General, St. John, and Edward.
They were soon all prepared for the ice.
Kate and Ada, enveloped in their furs, their dresses gracefully looped up (showing a bright scarlet petticoat trimmed with black velvet, made rather short so as not to impede their movements in skating) looked bewitching. St. John gazed at Ada's tiny feet in admiration, and on reaching the ice begged to be allowed to fasten on her skates, an honor she smilingly accorded him.
"Dangerous work that, St. John," said Lord D— coming up to them; "those are the prettiest little trotters in the world, more than enough to steal any man's heart from him. They stole mine the first time I ever saw them; did they not, Ada."
“Come, my Lord, don't be saucy; you are at my mercy on the ice, you know, so I advise you to take care," and with a merry laugh she glided gracefully and swiftly away.


The rosy cheeks a girl acquired during a skate were often thought comely as well.

We may assume, then, that many men and women, perhaps including Maude Powers and Alexander Rae, went for a skate on Valentine's Day, 1906, and enjoyed the experience on several levels.