The postcard shown below portrays Upper Wyndham Street as it appeared in the early 1940s, in a somewhat hallucinogenic color scheme. The Dominion Public Building is quite recognizable on the right and the street is full of period cars. 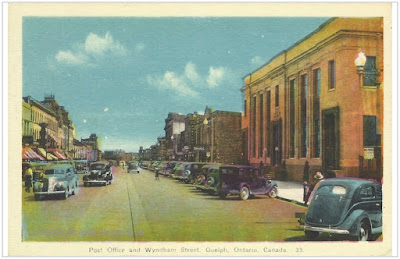 This card was printed by the Photogelatine Engraving Co., Limited, Ottawa.

More important than the picture, though, is the message on the other side, which reads:

The message is fun to read for two reasons. First, it is scolding its recipient for being remiss in sending a letter, a function that postcards were often used to fulfill. Second, it identifies Mr. William Guigues as a trainee at the Royal Canadian Air Force (RCAF) Wireless Training School Number 4, Guelph.

The RCAF Wireless School Number 4 at Guelph began in July, 1941 with the task of training wireless operators to be part of airplane crews that might fly bombing raids over Europe or submarine patrols over the oceans. The history of the Wireless School is well documented on its Wikipedia Page, an article, "U of G's military history" (The Portico, 2008), and a story by Ed Butts (Mercury, 17 August 2015). So, I will provide only a short outline here but try to fill in some items that illustrate the life of trainees at the School.

At first, the Government of Ontario's plan was to close the Ontario Agricultural College (OAC), the Macdonald Institute, and the Ontario Veterinary College (OVC) and turn the entire campus over to the RCAF for their School. This plan met with strong objections from the local population. The RCAF surveyed the campus and determined that only a part was necessary for the needs of the School. So, only the Macdonald Institute was completely shut down during the Second World War.

A notion of the School campus can be gained from the photograph below, taken at its opening on 9 August 1941.

Training for wireless operators ran for about 6 or 7 months. Several cohorts, or "entries", underwent training at any given time. Academic training included radio theory, Morse code and mathematics, and was taught by OAC faculty. Additional training included swimming and how to right a capsized dingy after a water landing, in the swimming pool. Flight training was provided at Burtch Airfield south of Brantford. Naturally, marching and fitness were emphasized too.

The daily schedule was intensive:


The day started at 6 a.m. with two hours of physical training and drill. Classes began at 8 a.m. and went until 5 p.m., with a break at noon for lunch. There were more classes after supper.


The trainees lodged in Johnston Hall and ate in Creelman Hall.

The No. 4 Wireless School Association held reunions in 1987 and 1988, and the local papers featured many interesting reminiscences of the School's graduates.


Everybody had a radio. With all the different tastes in programming, it made quite a cacophony in the halls, especially in the mornings when we were getting dressed and shaved.


Most of the trainees were new to Guelph, Eddy also notes:


Before I came, the only thing I knew about Guelph was that we had a stove at home in Montreal with "Guelph" on it.


Perhaps his stove was made by the Guelph Stove Company.

Frank Russell recalls a brainstorm that one squadron leader had to help the trainees learn Morse code in their sleep (Mercury, 29 June 1987):


He had us string electric light bulbs in the alcove behind Johnston Hall, so the light shone in the guys' barracks windows.
When the guys were trying to sleep, this bright light would be flashing in Morse code. That lasted two weeks before they were told to get it out.


Discipline was fairly strict. Trainees had to maintain a high level of dress and deportment, and some of the instructors could be harsh. As a result, not everyone passed the course. Failure could be a serious issue since trainees who did not pass were often trained to be tail gunners in bomber crews, a highly dangerous position.

Eddy found that the Royal City had some agreeable entertainments to offer.


The Ritz [now Van Gogh's Ear] had a dance hall upstairs with a juke box. It was quite a hangout for Air Force types.
There was another dance hall on Wyndham above Ryan's [now the Wyndham Building]. They had pretty good bands with a big band style. I remember Willis Tipping had about ten guys who were really good musicians with a Glen Miller sound.


Evidently, Eddy and many other trainees managed to get in many visits despite the 10pm curfew imposed by the School, although that was relaxed on Saturday nights.


(The Wyndham Building today—formerly the Ryan. Its second floor served as a dance hall.)

The extent to which trainees might go to get out on the town is illustrated by graduate Robert Allen, who wrote (OAC RE1 OAC A0670):


Would you believe we fooled the RCAF brass for 6 months—convinced them we were "Bush Baptists" (Religion); they couldn't find a minister to suit—hence we missed out on Sunday Church parades. We all got 10 days C.B. [Confinement to Base] when they found out, but the tunnel system under the sidewalks into Guelph was quite handy. I don't think they ever found out how we disappeared.


I would love to know what tunnel system he is talking about! At any rate, the story illustrates one of the downsides of relying on security fences.

Naturally, a big part of the attraction of the downtown hangouts was that they were also frequented by local girls. Eddy Traynor notes that many of the women in town were involved in war-related industries, such as making uniforms. Frank Russell recalls that the Knights of Columbus used to put on dances for the troops where they could meet some local girls, although they were "well chaperoned" and no drinking was allowed. That would be at former Knights of Columbus Hall on Dublin Street just north of Waterloo Avenue, currently the site of the Boarding House Gallery.


(The Boarding House Art Gallery today—formerly the Knights of Columbus Hall, where well-chaperoned and alcohol free dances were held.)

In any event, boys met girls. For example, Eddy Traynor met, courted and married Guelph native Elma Delaney, all within his six-month stay at the school!

I was not able to find any records in the University of Guelph archives specifically about our postcard writer, Mr. William Guigues. Records on Ancestry.ca show that he was born in 1925, married Helen Victoria Lord in 1945, and later settled in Ottawa, where his parents (Mr. & Mrs. W.C. Guigues) lived.

Fortunately, William's daughter-in-law Deborah has kindly provided a few more details. Perhaps most interesting is the following photo of William and Esther—whom he mentions in his postcard—in his parents' backyard in Ottawa. 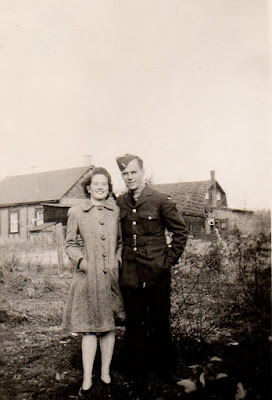 Another photo shows William at a railway station in Ottawa. This photo must be somewhat later since William has an Aircraftsman wing and Sargent's chevrons on his uniform. 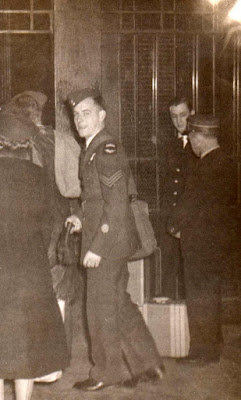 The usual posting for a radar technician in that period would be to an airbase in Britain. However, William instead went to Summerside, Prince Edward Island. Perhaps he underwent navigation and spotting training at No. 1 General Reconnaissance School there. Among the things he spotted in town was his future wife, Helen.

Following the war, William worked in retail for a couple of years before rejoining the Air Force with the occupation of air traffic controller. This job took him to many military airports in Canada and also Germany. Finally, he retired and worked as an air traffic controller for a number of years at the Ottawa International Airport. He died in Ottawa in 2006.

Wireless School No. 4 closed on 12 January 1945 as the war was headed towards its conclusion. By that time, some 5000 to 5800 young men like William Guigues has passed through its gates. The campus, the city, and the nation began to return to their peacetime state.

Perhaps the most distinguished graduate of the School was Lincoln Alexander, later an M.P. and Lieutenant-Governor of Ontario. Of his time at the School, he said: "I remember the friendship and the fun. It made me a man. It taught me what authority was all about. It taught me to respect others. I'm proud of my service."

Thank you to Deborah Guigues for information and pictures of her father-in-law!

Thank you also to the staff of the University of Guelph Archives for help in locating the appropriate documents.