If asked about long-standing institutions in the Royal City, you might think first of the Ontario Agricultural College. That would be perfectly understandable. However, Guelph is also the site of another historical, Provincial institution, lately known as the Guelph Correctional Centre. For about 90 years, Guelph was the site of a provincial jail. How did it get there?

The answer involves changes in provincial politics and attitudes towards crime ("Joseph P. Downey and prison reform", W. J. Waines, Historic Guelph 16, 1977). In 1902, Joseph Downey was elected the first conservative member of the Legislative Assembly of Ontario from Wellington South. In 1905, Downey was re-elected and became part of the first Conservative government of the province under James Whitney. Downey, it seems, had a special interest in prison reform and was appointed chair of the Special Committee on Prison Labour in 1907.

The Committee was given a mandate to inquire into the issue of how prison labour might comport with "free" labour in the province. At the time, prisoners were not normally given opportunities to work while incarcerated, while those who did laboured under what we would call sweatshop conditions. Downey had the idea that work under normal conditions would be beneficial for prisoners–who would acquire employable skills–and for society because employable ex-prisoners would be less likely to re-offend.

The Committee members visited prison facilities in the Central Prison in Toronto, and also reform facilities in Europe, Australia, and New Zealand. In their report to the Legislature in 1908, the Committee recommended that the Province should set up a reformatory, where first-time prisoners guilty of minor offenses could be rehabilitated through employment. In particular, the Committee singled out agricultural work as most suited to the purpose of reform:


How does employment in the open air, especially farm work, meet these
requirements? It is productive, for nature is generous in her return for
labor expended on the soil. It is remunerative because the produce of the
field can immediately be used not only by the Institution itself but by other
Institutions under Government control, thereby saving materially the cost
of maintaining the Institutions. It is labor which offers the least compe-
tition to free labor.


In addition to its productivity, agricultural work is especially good for the character of people prone to criminality (note the connection with the temperance movement of the era):


Crime, in a large majority of cases is traceable to alcoholism and its consequences.
Work in the open air with well regulated diet is without doubt the best means of curing the drunkard, and this is especially so if the reformatory can detain him until cured. ... Outside labor improves the health of the prisoner, and in improving the physical condition, lays the foundation for moral improvement. The great diversity of occupations which may be carried on in an Agricultural Reformatory permits a constant change of work which is in itself a great help towards a prisoner's reformation. Labor on the farm is educational because of the many different kinds of occupation offered, and the opportunities for intensive agriculture. The interest the prisoner takes in his task when he sees the product of his labor growing and bearing fruit may be in many cases regarded as the measure of his reclamation. The constant surveillance of a prison is largely done away with, and the relative freedom enjoyed reconciles the prisoner to his surroundings, and thus helps on the work of reformation.


Just as the prisoner's efforts bear edible fruit, so does the province's efforts to cultivate law-abiding citizens!

The report won the support of W. J. Hanna, the Provincial Secretary, and the project was a "go"!

Given the emphasis on agriculture in the project and the chairmanship of Mr. Downey, it seemed natural that Guelph was selected as the site of the new "prison farm", as it was then often referred to. In 1908, 800 acres east of Guelph were purchased. In 1910, prisoners were transferred from Central Prison in Toronto to the new site to begin preparing the land and erecting the new facilities. (They were apparently housed in the existing farm structures left over from the previous owners of the lands.)

Architect John McIntosh Lyle was hired, also in 1910, to design the facility. Trained in the Beaux Arts style, Lyle chose a restrained classical form for the main building. However, Secretary Hanna ultimately found Lyle's fees too dear and gave most of the design work to James Govan, an architect in the Secretary's own Department. So, the gatehouse, outbuildings, and layout of the grounds are largely the work of Govan and his collaborators.

In 1915, the work was complete enough that the remaining prisoners at the Central Prison in Toronto were transferred to the new facility. Although the site became a military hospital from 1917 to 1921, it remained in use as a "prison farm" for most of the time until the late 1970s. Indeed, it was well known for its orchards, its cattle herds, and its abattoir. In addition, the prisoners did a great deal of work on the grounds, quarrying stone at a nearby site and using the stone to landscape the grounds into the early 1930s.

Eventually, however, the province could no longer see the relevance of the agricultural rehabilitation offered by the Correctional Centre. Farming skills were no longer so much in demand, or were increasingly provided by machinery or migrant labour. Finally, the facility was closed in 2001 and the Province began to seek new uses for the property.

This process continues today. The Province and the City of Guelph are soliciting ideas for the development of what they call the "Guelph Innovation District". Plans would include some mixture of residential and commercial development, along with a college campus, perhaps.

A group called the Yorklands Green Hub advocates the establishment of


a demonstration and educational centre in Guelph where residents, business persons, schools, community groups of all ages and cultures can see, learn and practice appropriate technologies for water, energy and resource conservation, urban farming and people powered transportation.


All parties also wish to protect the historic structures on the site, as well as the significant features on the grounds. Not doubt, this will be quite a challenge!

In the 1930s, the Reformatory attracted attention from postcard makers. Both the Photogelatine Engraving Company (PECO) of Ottawa and Valentine-Black (VB) of Toronto produced a series of cards displaying its main building and grounds. Let's start with the main building itself. Here is a view of the front elevation taken from the west near the York Rd. entrance. 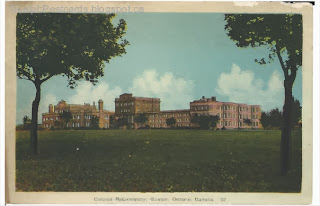 It was made by PECO and has a caption that says, "Ontario Reformatory, Guelph, Ontario, Canada. - 32". The picture provides a good view of the the layout of the building, with its classical orderliness and sprawling wings. Also, it displays the emphasis placed on the bucolic setting of the structure. It was set into large, open grounds that were meant to provide a feeling of verdure and openness, in contrast with the massive and confined design of typical prisons. 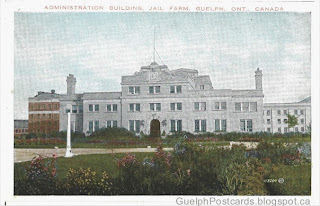 This card gives a better view of the details of the building. However, the facade is colourized to resemble white limestone instead of its actual buff stone, making it look a little "off" (or perhaps too classical). Clearly, the colourizer had not seen the building or a colour reproduction of it.

VB also includes a photo of the grounds that includes a picture of the gatehouse by the entranceway to the main building. Here it is, with the caption, "Scene by the Highway, near Guelph, Ontario, Canada". 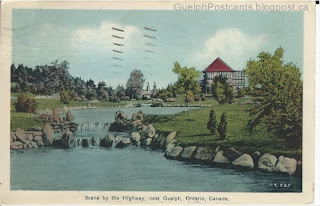 The scene shows one of the ponds constructed by the prisoners, with the bridge and gatehouse as incidental accoutrements in the background. The caption does not even mention the "Jail farm" but only the nearby Highway 7 (York Rd.), which was outside the city limits at the time. This postcard was actually mailed in 1937, confirming that the photos in this series were taken before that time (likely around 1935).

The water features on the grounds appear in many more postcards. Here is a good example from PECO. The caption reads "A corner of the lake, Ontario Reformatory, Guelph, Ontario. - 28." 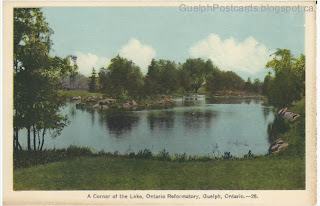 Interest in the Reformatory seemed not to survive World War Two, at least among postcard makers. However, PECO (now in Toronto) did produce a Kodachrome card of the same old pond in the 1950s. The caption on the back read, "Ontario Reformatory, Guelph, Ontario, Canada - 9." 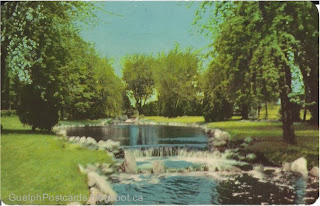 In this picture, the greenery hides the bridge and gatehouse behind, throwing all the emphasis on the pond and stream in the foreground.

Not unusually, the postcards display an interest in the buildings and grounds of the jail farm, but no interest in the prisoners or even their orchards, fields, or herds.

Of course, it is difficult to match these pictures exactly since the grounds have changed somewhat. Also, Google Street View provides shots only from the roadway. (You can take a recent photo tour of the buildings here.) Having said that, this image is close to the one above. If not a perfect match, it is the kind of scene that postcard markers of the era would have appreciated as a "beauty spot".

The City of Guelph continues to grow and now the old prison farm will be incorporated into its fabric. How that will happen remains to be seen. I suppose it would be fitting if the site could become a centre for urban farming, reforming urbanites with agriculture has it did convicts many years ago.

Update (23 April 2014): This posting is mentioned in a Mercury article by Andrew Vowles on Guelph's visioning process downtown.

Posted by Cameron Shelley at 14:27 No comments: