Postcard from the trenches: Charles Mogk

When Canadians went overseas to fight in the Great War, communication with friends and family at home became significant for morale in both places. With the great popularity of picture postcards in the preceding decade, it was natural that postcards would be an important part of that process. As noted in my earlier post about Thomas McCloskey, social groups such as the Y.M.C.A. often provided postcards for the use of soldiers to send quick notes home. However, the armed forces themselves realized the significance of postcards for this purpose and sought to provide them to the troops. However, they decided to design a special postcard of their own.

Indeed, hardly had the British Expeditionary Force crossed the Channel when letters and postcards from the Tommies began to flood back to the UK. Since stamps were often hard to come by on the battlefield, the postage was frequently collected by the Post Office from the recipients. This process proved to be too costly and time-consuming, so the House of Commons quickly passed an act making all letters (and postcards) from active service personnel free.

This measure solved the stamp problem but left the military with the problem of how to monitor the information that was being sent from the front through the mail. There was the potential that service personnel might leak news that was of operational importance. Also, and perhaps more significantly, they were concerned that a flood of unvarnished information about the conflict might undermine morale on the home front. To deal with this issue, the military produced its own postcard, officially "Army Form A.2042" or "The British Field Service Post Card" (F.S.P.C.).

When it arrived in France, the Canadian Expeditionary Force was also issued the F.S.P.C. so that Johnny Canuck could write home too. An example of this card, send to Guelph in 1917, can be seen below. 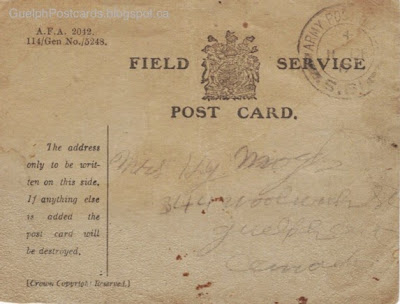 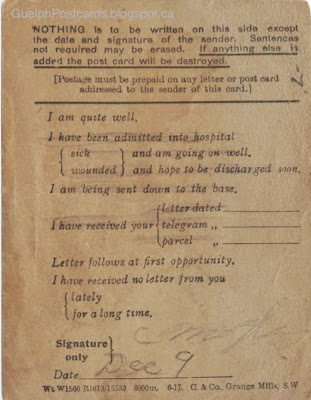 A look at the back of the card shows how the system worked. The sender had a menu of pre-formed sentences among which to choose for communication. The choice was signified by crossing off the sentences that did not apply in the sender's case. In this case, the sender has left "I am quite well", "Letter follows at first opportunity", and "I have received no letter from you {lately/for a long time}", and signed his name, C Mogk, and the date, Dec. 9 [1917]. On the front, only the address has been pencilled in: "Mrs. Hy Mogk // 344 Woolwich St. // Guelph, Ont // Canada". Having complied with the directions, the letter was cancelled by the Army Post Office and sent to Guelph.

Commentators have emphasized the draconian way in which these cards attempted to control the narrative about the war. For example, Paul Fussell says (1975, p. 185):


The implicit optimism of the post card is worth noting—the way it offers no provision for transmitting news like "I have lost my left leg" or "I have been admitted into hospital wounded and do not expect to recover."


Only good news was allowed and only movement away from the front could be explicitly communicated. Soldiers sometimes rebelled against this censorship in clever ways. The poet Wilfred Owen had an understanding with his mother that when he crossed out "I am being sent down to the base" with a double line, it meant that he was really being returned to the front lines.

In spite of the Procrustean nature of the card, it was massively popular. Untold millions were printed, filled out, and mailed. By the autumn of 1917, the British Expeditionary Force was sending over 285,000 pieces of mail per day, many of them in the form of these cards. Part of their appeal was that they got home quickly since they did not have to be opened and laboriously checked by military censors. As such, they were called "Whizz bangers" or "Quick firers" by the troops, after German shells that travelled faster than sound (Fussell 1975, p. 183). Booth (1996, p. 14) notes that the cards were often sent off after a major battle, to let people at home know the sender was still alive, if not "quite well."

Perhaps this is the reason for the card home from Charles Mogk. Born on 16 Jan. 1888, Charles was one of five offspring of Henry and Catherine Mogk of Bornholm, Ontario. His Attestation Paper shows that he was inducted in the army at Radisson, Saskatchewan, 17 Feb. 1916, near Richard where he was apparently working as a farm laborer.

No part of his service record is available online. However, the postcard may suggest that he had seen action in the Second battle of Passchendaele, which occurred in late October and early November. In that battle, the Canadian Corps succeeded in taking high ground near Passchendaele in the face of some determined opposition. Perhaps Charles was sending the postcard to assure his family that he had survived.

The postcard is addressed not to his family in Bornholm but to Henry Frederick Mogk in Guelph. Henry was Charles's older brother and is listed in the 1917 Vernon's City Guide to Guelph as a carpenter living at 344 Woolwich St. Also at that address were his wife, Devina, and their son Clarence, who is listed as a clerk in the Candyland confectionary on Wyndham St. What an ideal job for a 13 year-old boy! Henry and Devina seem to have had a penchant for double middle names, for all their children have them. The 1921 census lists Ida Florebett Eugenia Mogk, Clarence Clina Faraligh Mogk, Jais Mary Marie Mogk, and Henry William Stanley Mogk. The house is one of Guelph's characteristic stone cottages and can be seen in this Google Street View image:

The Mogk family were in Guelph for only a few years. They appear for the first time in the 1914 directory and disappear after the 1917 edition. The 1949 Voters' list puts them in Hamilton. (There was another Mogk family in Guelph, headed by August Mogk, that lived for a long time in the Royal City. Although the two families were probably related through ancestors in Germany, August's ancestors were associated with the Waterloo region and not Bornholm.)

Interestingly, Charles observes the custom of addressing his postcard not to his brother but to his sister-in-law, Devina. Many postcards in that era were addressed to young girls, who might collect them for the pictures. However, it was also not unusual for postcards to be addressed to the wife of the sender's immediate relation. Perhaps, as family correspondence was regarded as a domestic matter, it was considered appropriate to send it to the woman who had charge of the home.

Happily for the Mogk family, Charles survived the war. The 1921 census lists him back in Bornholm living with his parents. Also listed is Jean Mogk (née Stevens) who was Charles's new wife. The census states that Jean, who was born in Scotland, immigrated to Canada in 1920. It is not clear when the couple married, but the timing suggests that Jean was a war bride. I wonder if they had met by the time Charles sent his postcard in 1917.

A picture of the new couple has come down to us, courtesy of Brenda Rohrer Smith: 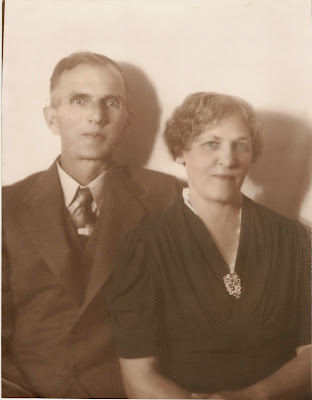 Unfortunately, the marriage was cut short when Jean died in Perth, Ontario, in December 1925. Charles later married Ethel Hannah Case, who had previously been married to George Ross of Keppel in Grey County. Records are silent on the matter, but Ethel may have been widowed around the same time that Charles became a widower. Perhaps looking for a change of scene, and recalling his work as a youth in western Canada, Charles and Ethel moved away from Ontario and are to be found on the 1958 Voters' list in Penticton, B.C. Charles died on 3 May 1960 and Ethel on 15 May 1973 and both are buried in the Maple Ridge Cemetery. Charles's grave marker can be seen below: 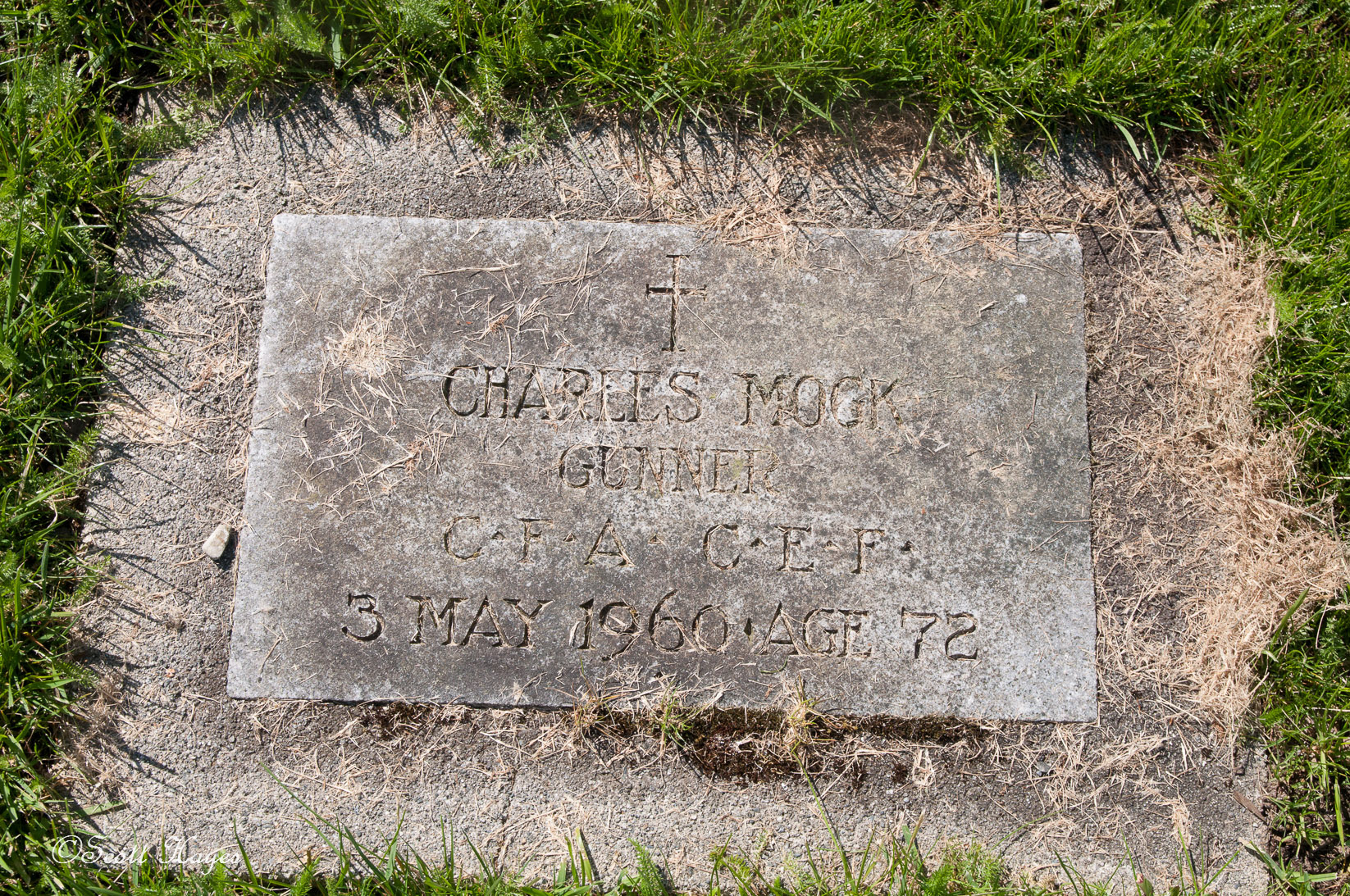 The marker notes only his name, age, and military service: "Gunner // C.F.A. C.E.F.". I believe this stands for "Canadian Field Artillery, Canadian Expeditionary Force", suggesting that Charles served as an artilleryman during the conflict. The marker is brief, formulaic, and to the point, much like the F.S.P.C. that he sent to Guelph from the front lines all those years before.

The British Field Service Post Card apparently had a lasting impact on modern life. Fussell says that it set the precedent for one of the most unwelcome, modern types of written communication, the bureaucratic form (1975, p. 185):


The Field Service Post Card has the honor of being the first widespread exemplar of that kind of document which uniquely characterizes the modern world: the "Form." It is the progenitor of all modern forms on which you fill in things or cross out things or check off things, from police traffic summonses to "questionnaires" and income-tax blanks.


The mechanism of the British F.S.P.C. was widely parodied after the war. Fussell remarks on the following note written from after the war by Wilfrid Owen to fellow poet and veteran, Siegfried Sassoon (p. 185):


My dear Siegfried,
Here are a few poems to tempt you to a letter. I begin to think your correspondence must be intercepted somewhere, So I will state merely
I have had no letter from you {lately/for a long time}.


Besides being the origin of the form, the F.S.P.C. seems to have fixed in people's minds the notion that government agents might be watching their mail.

As such, the F.S.P.C. had become a familiar, running joke in the English-speaking world. Commercial postcard makers also produced parodies of them for many years after the war. I wonder if the soldiers felt nostalgic for them or merely enjoyed abusing the knock-offs as a kind of revenge.

Also, the F.S.P.C. was issued in Urdu for use by the India Expeditionary Force. I wonder what they thought of it.

Posted by Cameron Shelley at 11:36 No comments: