In keeping with the approach of Christmas, I thought it would be appropriate to put up a card with a Christmas message on it. This card has a picture of one of the most prominent additions to Guelph architecture during the Edwardian era, the Carnegie Library, also known as the Free Library or the Guelph Public Library. 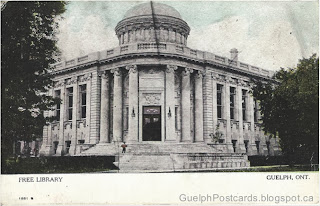 The card has some wear, including a crease at the top near the middle. There is an odd figure standing halfway up the front steps on the left side, perhaps a child to judge from its size. The postcard was published by Warwick Bro’s & Rutter of Toronto, and was sent to Miss Mary Staples of Lifford, Ontario on 6 December 1907. The message reads:


Guelph Ont, Dec 5th/07 // Dear Mary:- I don’t think I sent you a card like this one before. it is a pretty place both inside and out[.] Wishing you a Merry Xmas and a Happy New Year, B.P


It seems that B. P. had sent Miss Mary some postcards before. Perhaps Mary was a collector, as were many young ladies in the Edwardian era. The use of "Xmas" for "Christmas" seems appropriate as short forms and abbreviations were often used in postcards because of the small space for writing.

B.P. remarks approvingly on the appearance of the library. In fact, its appearance was the subject of some controversy at the time that it was designed and built. By the turn of the 20th century, the citizens of Guelph had realized that their existing library facilities were too small. In 1902, the local library board, headed by lawyer James Watt, had successfully applied for a grant of $20,000 from US steel magnate Andrew Carnegie, who was noted for his promotion of public libraries.

The library board favoured a design by local architect W. Frye Colwill, done in the Beaux Art style. The style was classical in inspiration, as is evident from the dome over the main doorway, and the Corinthian columns standing astride the corner entrance, along with many other elements. The style was popular for grand public buildings in the US at the time, and Watt thought that it fit in well with the aspirations of the City of Guelph, saying that it, "would be an ornament to the city and a credit to the architect."

The officials in Carnegie's office begged to differ. In a report, one of them derided the proposed appearance as follows: "They seem to have deliberately chosen a grandiloquent and expensive exterior..." In other words, the design was far too pretentious for a simple provincial town like Guelph. However, the library board had already cashed the cheque, as it were, and so construction went ahead as planned. The cornerstone was laid on the propitious date of St. George's Day (23 April) 1903, the 76th anniversary of the founding of the Royal City. Construction proved complicated and the building did not open until September of 1905. The citizens seemed to agree with B.P. that it was indeed a pretty building.

The building was sited on the corner of Norfolk and Paisley Streets downtown. The entrance looks out over the street corner in the direction of the downtown core. Today, the corner looks somewhat different, as you can see in the Google Street View image below.

As you see, the building is gone. As the Royal City grew, the library collection became too expansive for the old building. It was razed in 1964 and replaced by the current structure in the following year (which is a story for another time). The current library faces out on to Norfolk St., and turns its shoulder to the corner on Paisley St. that the Carnegie Library watched over.

Of course, time does not stand still, and the current library has, in its turn, become too small. A new public library is planned for the nearby Baker St. site, in yet another architectural style. Let us hope that it is a "pretty place inside and out" and worthy of a new postcard.

Wishing you a Merry Xmas and a Happy New Year!