The picture side of this postcard is common enough, providing a view of the Priory, the "First House in Guelph, now CPR Station" printed by Warwick Bro’s & Rutter, Limited of Toronto. 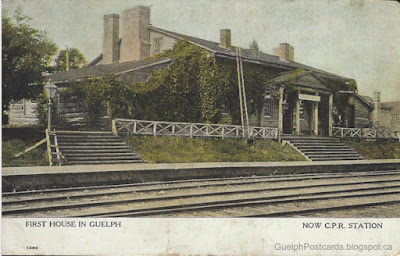 However, the reverse side is more interesting, for two reasons.

First, it conveys Xmas greetings from Guelph to an unusual destination, that is, Tokyo Japan:


Xmas 1908 // Dear Miss Blackmore, As you are so ancient I suppose you will remember dates prior to the building of this house. I thought that you would be interested in old things. Merry Xmas. Hope you got my other message. Sincerely Yours, Margaret E. A.

The reverse side also has an interesting Japanese postmark and some Japanese writing on it. 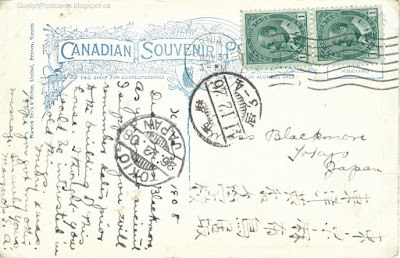 Perhaps the Japanese writing provides a more specific address. If anyone can read it, please let us know what it says in the comments below!

I am not sure who the sender is. There was a Margaret E A Griffin, matron of the House of Industry and Refuge near Fergus. That would fit the signature "Margaret E. A." but that's about it.

Oddly, I have a better idea about the addressee, Miss Blackmore. I believe that she is Miss Isabell Slade Blackmore of North River district, Colchester County, Nova Scotia. Born in 1863, the third daughter of Richard and Margaret Blackmore, a Truro area farm family, Isabell had become a local school teacher. At age 19, she had joined the Methodist Church and began thinking about missionary work.

By her own account, the calling to spread the gospel overseas became urgent and she applied to join the Canadian Methodist Women's Missionary Society (WMS), noting in her application ("A sensitive independence", Gagan 1992, p. 26):


[T]he conviction that help such as I could give was needed in the Lord's Vineyards abroad, became so strong that I could no longer put it aside ... All I have and am I wish to belong to Christ. Gladly will I work in His service in any way or anywhere, if I may but know I am doing His will. As to how soon I can go, I feel I am given but one answer. When the Master has need of me.


Evidently, the WMS was impressed and sent Miss Blackmore to Tokyo in 1889, where she remained (with occasional furloughs back to Canada) until 1924.

Japan was an exciting place to be a missionary in that time. With the Meiji Restoration of 1868 and the establishment of the Meiji constitution in 1889, Japan became open to western influence. The WMS seized the opportunity to set the Japanese people on the right path amidst the resulting cultural tumult ("Missionary leaflet," February 1892, v. 8, no. 2, p. 7):


Great changes, due to contact with the West, are in progress, some of an alarming nature. We refer to Rationalism, Unitarianism, and the New Theology, which has filled the minds of some of young Japan’s travellers to the West. It is encouraging, however, for us to know that those missionaries, whose sole aim is to lead men to Christ and to build them up in holiness, have very little trouble with the new “isms” among their converts. The missionary, political and commercial atmosphere of Japan is now electrified as never before. The land lies before us, and shall we not “go up and possess it?” Pray that the God of all wisdom may guide this intelligent and energetic people in this transition period of their country’s history.


The missionaries set up schools, concentrating on the Christian education of Japanese children. Apparently, these institutions were popular and successful.

Of course, along with Japanese receptivity to western ideas came military friction with western powers, as everyone jostled for influence in East Asia. In the Russo-Japanese War of 1904–1905, for example, the Japanese navy decisively defeated the Russian navy, thus giving Japan hegemony over Korea and Manchuria.

Japanese expansion put it on a collision course with the United States, which was moving into the Philippines and Guam. Realizing the the US Navy was not up to a fight with Japan, President Theodore Roosevelt had ordered the construction of 11 new battleships. In 1908, in a sort of pivot to Asia, Roosevelt sent the newly beefed-up Atlantic fleet on a world tour, which included a call on Yokohama in October. Known as the "Great White Fleet" for its white paint job, the visit sent a not-very-subtle message that American power in the Pacific was not to be taken lightly.

The event was recorded in many postcards, which may be viewed online at the Old Tokyo Vintage Japanese Postcard Museum and at The Peaceful Sea. Perhaps the oddest souvenir of the visit is this ashtray with a commemorative postcard embedded in the bottom!

The postcard shows a picture of the USS Kansas and what I assume is her commander, Captain Charles E. Vreeland.

Although the missionaries of the WMS seemingly paid little attention to world events, they must have wondered what this visit portended.

Shortly thereafter, Miss Blackmore received a postcard from Margaret E A from Guelph. Isabell and Margaret may have met in Guelph before. Miss Blackmore had visited the Royal City during the week of 22 October 1901 on furlough, during the annual meeting of the Board of Managers of the WMS, that year in Dublin Street Methodist (now United) Church (Globe, 23 Oct. 1901).

Isabell expressed optimism about the work of the WMS in Japan:


Miss Blackmore, home on furlough from Japan, spoke on the revival there. She was sure the work would be permanent. The Japanese had shown a great deal of activity during the revival, in their giving and in their work. Results could be traced directly to past work, and the Japanese Christians had learned to delight in the work.


It may be that Isabell and Margaret met and struck up a correspondence then.

The United Church of Canada Archives have some pictures of Isabell (called "Isabella Blackmore"). Here is a small detail of one taken in 1910 ("A sensitive independence", Gagan 1992, p. 23):

In her other message to Isabell, Margaret may have spoken about recent events in Guelph. It had been a significant year in the Royal City. Guelph's first Old Home Week, a prolonged bash for Guelphites past and present, was held in early August. Harry Peer had skated 186 miles in ten hours at the Victoria roller rink. A new bridge across the Speed at been built on Eramosa Road.

On the police blotter, six prisoners attempted to escape from the County Jail by scratching a hole through the wall of their cell with iron parts harvested from their beds (Globe, 10 March 1908). However, the ring leader, John Cox, was caught scaling the wall and, after being "hauled over the coals", ratted out the whole scheme.


That the liquor traffic carried on in St. Patrick’s Ward amongst the Italians has reached very serious proportions, is the conviction of Inspector Oakes, who is still working on the case.

Perhaps my favorite law-and-order item concerned efforts to keep people off the grass around the Blacksmith Fountain in the middle of St. George's Square (Mercury, 3 Nov. 1908):


At the Council meeting last night, Ald. Carter asked if the Parks and Shades Committee could not do something to keep the general public off the grass plot in the centre of St. George’s Square. Everybody seemed to want to walk on it, he said, or throw peanut shells all over it, and even the street railway employees made it a resting place.


Carter thought that some "Keep off the grass" signs would do the trick. Eventually, a fence was placed around whole installation.

Xmas in Guelph in 1908 was congenial (Mercury, 26 Dec. 1908). The weather was mild but winds were "raw", and the ice in the Victoria Rink (behind Knox Church) was too soft for skating. Even so, people enjoyed skating and tobogganing in the Open Air park (now Howitt Park), where the toboggan run had recently been improved.

Perhaps the weather was too good. Rev. Caleb Buckland of St. James's Church, evidently miffed at how many of his parishioners had voted with their feet, "took occasion to comment on the fact that Christmas day was looked upon by too many as a day of pleasure instead of one of worship."

Services at the Church of Our Lady were well attended. People may have been curious to see the results of the extensive interior renovations recently untaken there. However, many wanted to hear Rev. Dr. Drummond, a visiting priest widely known for his oratorical eloquence. Apparently, they were not disappointed.

Choral performances were put on in the city's hospitals, the Elliot Home, and the Homewood Sanitarium.

On the downside, 20 gallons of milk were spilled on the road at Quebec and Woolwich Streets (now beside the Cooperators Building) from a delivery sleigh after the horse pulling it took fright for some reason (Mercury, 24 Dec. 1908). The report neglects to say whether anyone cried over the spilled milk or not.

Guelphites took little notice of Japan that Xmas. However, the Ontario Agricultural College Review (v. 21, no. 3, p. 166) noted that December that some Japanese students were studying there. It published a picture of the main building surrounded by the coats of arms of some of its international students. The symbol of the rising sun can be seen among them. 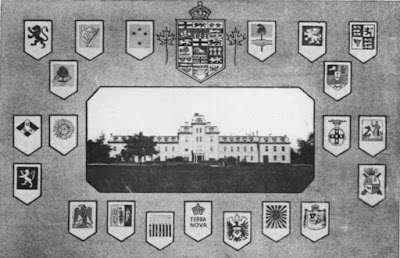 Miss Blackmore remained in Japan until 1924. Her return to Nova Scotia was likely prompted by the great Tokyo-Yokohama earthquake of 1923. The powerful earthquake, followed by fire storms and tsunami, nearly obliterated Yokohama and likely swept away the institutions built by the WMS.

The event was also seized upon by Japanese nationalists as an excuse to remove foreign and liberal elements from Japan. It may have helped to set Japan on a militaristic course:


Though they may dispute its effects, historians agree that the destruction of two great population centers gave voice to those in Japan who believed that the embrace of Western decadence had invited divine retribution. Or, as philosopher and social critic Fukasaku Yasubumi declared at the time: “God cracked down a great hammer” on the Japanese nation.


The Japanese navy attacked Pearl Harbor on 7 December 1941, an act that put Canada and Japan at war with one another. One wonders what Isabell Blackmore thought of that development. She died 26 days later, on 2 January 1942 and was buried in the Crossroads Cemetery, Valley, in her birthplace of Colchester County, Nova Scotia.
Posted by Cameron Shelley at 14:38 1 comment: