Happy holidays from the Goodwin family!

In addition to providing pictures of distant places, people have used postcards to connect with friends and family over the holidays. Postcard makers have produced many postcards with holiday-related images in order to satisfy this desire. In this posting, we will look at a number of postcards that have been sent to people in Guelph in order to convey best wishes on festive occasions. More specifically, we have the good fortune to have cards that were sent to one particular family in Guelph, namely the Goodwin family.

The first card is for New Year's and contains a small, wintery scene along with a verse of well wishing. It is unusual for a postcard as it is in portrait rather than landscape orientation. 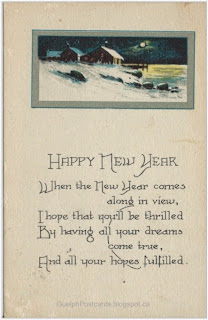 In addition to the printed verse, the message on the back says, "Wishing you all a Happy New Year. Nora" It is addressed to Miss Alice E. Goodwin at 518 Woolwich St. in Guelph (roughly where the water tower stands on Woolwich near Speedvale today) and appears to have been sent from Elmira on 29 Dec. 1911.

The Goodwins were an established Guelph family. According to the 1901 census, William Goodwin Sr. was born in 1866 but later moved from Toronto to Guelph in 1888 to work in the Bell Organ and Piano factory, where he spent the rest of his career until its ultimate closure in 1932. He and his wife had a large family, consisting of Harry (b. 1891), William Jr. (b. 1893), Florence (b. 1895), Ralph (b. 1896), Gertrude (b. 1899), and then Alice (b. 1901). (William's job must have paid reasonably well, as Annie Scroggie, apparently a neighbour, is listed as a domestic in the Goodwin household.) Probably, Alice, like many girls of her era, collected postcards and so had many addressed to her by friends and relations.

William Sr. is described in his obituary (Mercury; 30 Mar. 1933) as "one of this city’s best known and most esteemed residents" and as someone who "took a keen interest in sports and for some time was a member of the executive committee of the Guelph Cross Country and Road Race Association". In other words, he was an avid cyclist and promoter of cycling in the city. He and Annie (née Hiebein) were married in 1891 and evidently wasted no time in starting a family.

The three sons were about the right age for military service when the Great War broke out. Harry was evidently keen to join up and was reported to be one of the first Guelph boys to ship out. He received the Military Medal during his service but was apparently badly wounded and returned to Canada to recuperate in the Davisville Hospital in Toronto. It seems that he never recovered and died in 1921 (Mercury; 22 Jan. 1921). His body was returned to Guelph, where he was buried in the soldiers' section of Woodlawn Cemetery with military honours. Unfortunately, I can find no records of his induction or service, nor is he remembered on the Guelph Cenotaph or any books of remembrance, which seems a shame.

There is no record of military service for the middle son, William Jr. Perhaps this is due to his marriage on 26 Sept. 1917 to Reta Shepherd. William remained in Guelph until his death on 23 May 1948 (Mercury; 25 May 1948). His obituary mentions two children, Albert and Mrs. Ernest McFarland, both of Toronto. Reta is not mentioned, so they may have divorced.

The youngest son, Ralph, had a different military experience from Harry. His attestation papers show that he was conscripted into service on 25 Oct. 1917 in Guelph, the day before his brother's marriage! His military career is uncertain but the next record shows that he married Gladys Viola Joyce in Guelph on 13 Oct. 1920. The 1921 census shows him living in the Joyce household with his new wife. At some point in the next decade, the pair moved to Lansing, Michigan.

For whatever reason, the family seemed to have an affinity for Michigan. Just before the war, Florence married a young man from Brighton, England named William Sprentall. In 1919, the pair emigrated to Ann Arbor, Michigan, perhaps establishing the family's connection to that State. In any event, the remaining holiday postcards in this set were mailed to Guelph from Ann Arbor in 1921.

The next card conveys wishes for a happy American Thanksgiving. It was published by Whitney of Worcester, Mass., and sent on 3 Nov. 1921. 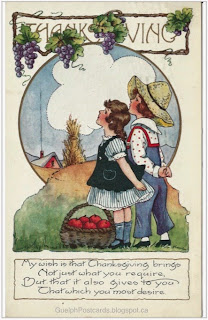 The message on the back says, "Hope you folks are all well and in good spirits. rec’d your card. Mabel." It is not clear who Mabel is; perhaps an in-law in Ann Arbor who wanted to send Alice another card for her collection.

The next card is a birthday card sent on 1 Dec. 1921 to Mrs. Goodwin (Annie) on the occasion of her birthday on 3 Dec. 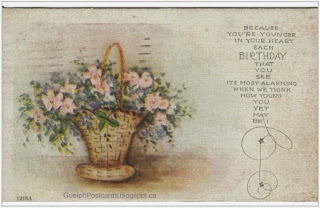 The message on the back reads, "All are well. Doris May can sit alone & realy [sic] takes steps. May." May will be Florence, whose middle name is May. I guess that Doris May must be Mr. & Mrs. Sprentall's new baby girl! The address is given not as Woolwich but just as "Elora Road", which was then the name of the street north of the city limits. Clearly, the post office knew where to deliver the card, even with such a vague address.

Of course, with Christmas approaching, we would expect Christmas postcards to be on the way. The following seasonal card was sent from Ann Arbor to Miss Alice Goodwin on 21 Dec. 1921. 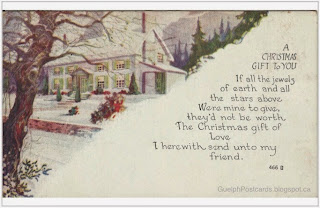 The message on the reverse side says, "A merry Christmas and Happy New Year to you and to the family. The Woods". New friends of the Sprentalls, perhaps.

The next Christmas card continues the now familiar theme of pictures of snug but snowy houses combined with light verse. 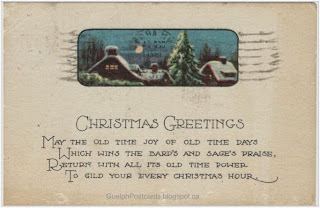 It was sent to Alice on 24 Dec. 1921 and conveys the following message, "Hope you have a Merry Xmas and a happy New Year. This is the wish of Mr. and Mrs. Christ[.] Paul." "Xmas" was a frequently used abbreviation of "Christmas" often used and highly suited to the restricted writing space available on post cards.

For the final postcard, we return to the New Year's theme with another postcard made by Whitney, Mass., and sent to Alice on 1 Jan. 1922. 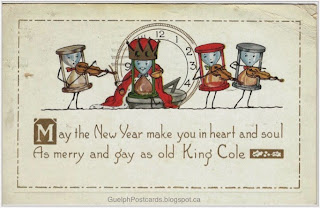 On this occasion, the message states, "Dear Alice: All well. Santa was real good to all of us. Lavina was here yesterday with her 5 children. Wish you all a Happy New Year. Tina".

That is all the holiday cards sent to Alice that I have yet found.

It seems that Alice never married, although she did move to Brantford at some time, as noted in her father's obituary.

It is curious that this set of cards has stayed together. I can only infer that Alice was pleased with the cards and kept them not for their intrinsic virtues but as a memento of her youth and her relations in Michigan. For us, they provide a little glimpse into past usages of postcards in keeping people in touch at special times of the year in days gone by.