The Prince of Wales visits the O.A.C.

The first sentence in the 1919 O.A.C. Review article (v. 32, no. 3, p. 134) puts the matter succinctly: "October the 21st was a red letter day in the history of the College—the Prince of Wales visited us for a couple of hours." Of course, Edward, then Prince of Wales, visited much of the Royal City, including the College, but it was his brief tour of the O.A.C., and Macdonald Hall in particular, that caught the public's attention.

During his extensive tour of Canada in 1919, the future Edward VIII visited many Canadian cities. On October 21, his train pulled into the Grand Trunk Station downtown so that he could make a stop in the Royal City. On his arrival, he was greeted by Mayor James Carter, M.P. Hugh Guthrie, and other civic dignitaries. After a brief inspection of the veteran's honour guard, the party proceeded across the street to a platform at the old City Hall where the Mayor gave a speech of welcome (The Globe, 22 Oct., p. 7).

The main purpose of the Prince's tour of Canada was to thank the nation for its efforts in the Great War and to reaffirm its importance to the Mother Country. These points were the main ones made in his brief reply to the Mayor (Guelph Evening Mercury, 21 Oct. 1919):


Mr. Mayor, I thank you most sincerely for your hearty welcome and loyal address. Your warm expression of attachment to the King and Queen has touched me very much, and I will not fail to convey it to them on my return. Their Majesties have, I know, a very pleasant recollection of their visit to Guelph eighteen years ago.
...
I know that the war services of Guelph were very great, and I wish to congratulate all your citizens, men and women, on their fine contribution to the united effort which has finally given us victory and peace.


There were more speeches, a medal presentation, and a parade up Wyndham St. and Woolwich St., as far as Clark St. Although it was raining, the Prince had the roof of his car left open so that people lining the parade route could see him. However, he did get "soaked to the skin."

Afterward, the Prince was driven through town to the Speedwell Hospital, formerly the "prison farm", where military veterans were recuperating from the war. Following that, His Royal Highness (HRH) went on to the O.A.C.

The remaining pages of the Evening Mercury give the O.A.C. visit barely a mention. However, other papers give pride of place to this part of HRH's visit, especially his interactions with the young women of Macdonald Hall. Arriving at about 11:45, the Prince was treated to luncheon there. The Toronto Star (22 Oct.) provides the most detailed account in an article entitled "Prince won hearts of all Guelph Co-eds":


The fair co-eds at Macdonald Hall, more than 200 of the prettiest and peppiest girls imaginable simply threw themselves at the head of the Prince of Wales on his visit to Guelph Agricultural College yesterday and gave him the most heart-thrilling time of his young male life.


The students sang "Johnny's in Town", a favourite tune of the Prince, and waved "a hurricane" of white handkerchiefs up and down, which was a customary way for women to wave at a parade at the time.


The Prince lunched in the bay window recess of the dining room, the girls greeting him with cheers and standing until he took his place. Six of the very prettiest, who had begged the honour, waited on the Prince's table, trim and chic in blue dresses with white aprons and collars.


After lunch and a dessert of pumpkin pie, the young party went out to the front steps of the Hall and posed for the photographers and "movie men" who accompanied HRH on his tour. At that time, this photograph was taken. 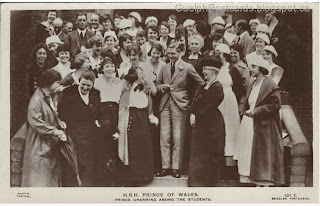 This reproduction is a postcard produced after the tour by British firm, J. Beagles and Co., which specialized in celebrity images. In it can be seen the Prince, holding a cigarette and sporting a flower in his lapel given him by the Mac girls. To the right of him in front stands Mary Watson, principal (dean) of the Macdonald Institute, and in back of him stands Katherine Fuller, the matron of the Hall (Guelph McLaughlin Archives RE1 OAC A0234).

You can see the front steps as they appear today in this image from the University of Guelph campus map:

Everyone appears to be laughing. The cause is the umbrella being held by the young woman in the lower left corner. The Toronto Star describes it in this way:


In the vivacious scramble one girl's umbrella handle got twisted. She was sure the Prince had done it. "I will buy you another," he offered, laughing.
"No, indeed," she replied, pertly. "I'll just keep it as a souvenir."


The general merriment was caused by the fact that the end of a cigarette thrown away by the Prince burned a little hole in the umbrella of the maiden on the extreme left, with the result that H.R.H. gallantly desired to replace it.


Stewart's account, along with his reproduction of the same photograph, may come from the front page of the Mercury, now missing from the archives.

Many photographs were taken of the Prince's visit to the city and the O.A.C. However, this image and the story behind it was, by far, the most widely reported and remembered. Why were reporters so keen on relating it?

Perhaps it related well to the general mission of the tour. HRH was in Canada, in part, to reaffirm the old order. During the war, women had assumed a number of roles and occupations previously reserved for men. Afterwards, they were expected to relinquish them to the returning veterans. The Prince's visit to the women's school, with the accompanying emphasis on his virility in contrast to the residents' femininity, symbolized the return of normalcy in gender roles.


Many of the young women "paired off" with men from the OAC, so much so that by the early 1910s the Mac program, particularly the short program, had already earned the famous nickname, the "diamond ring" course.


The marital reputation of the Hall was ready-made for a news story, with HRH, though unattainable, in the place of the male O.A.C. students.

Certainly, the Mac girls did seem to be star-struck. For example, the young women who waited on HRH in the Hall snatched some unusual souvenirs, including the butt of his cigarette and several unconsumed items of his food such as a piece of celery, a pie crust, and a lump of sugar. As he set out for his campus tour, they trailed after him singing "For he's a jolly good fellow." Later, when he got into his car to leave for the train station, they crowded around begging for his cigarettes (Toronto Star, 22 Oct.):


He took out his case, stuck one in his mouth, and then emptied the whole lot into their outstretched hands. There was much giggling and scrambling for the precious smokes.


You might see similar behaviour at a boy-band concert today!

Mind you, the Prince or his staff had planned for just such a situation. They had prepared souvenir photographs of HRH for distribution to the Hall residents, an example of which can be found in the archives. Either they anticipated the behaviour of the residents, or they wanted to prompt it.

By about 2pm, the Prince had been driven downtown and was on board his train headed for Stratford. The reporters were busy writing up their stories presenting HRH as "Prince Charming" to the pretty girls of the Macdonald Institute. It seems clear that the Mac women were duly impressed. For his part, it seems that the Prince also found the moment a pleasant one (Toronto Globe, 22 Oct.): "The Prince expressed himself pleased at his visit here, and at meeting so many young ladies, the change from meeting so many men being a most agreeable one."

In addition to still photographs like the one in this postcard, there are also several movie reels of the Prince's Canadian tour. Some parts are shown in this video from Library Archive Canada:

Others can be found in segments at British Pathé: Part 1, Part 2, Part 3, and
Part 4. Unfortunately, none of these videos shows HRH in Guelph. Perhaps that reel, if it exists, remains in storage somewhere.

Posted by Cameron Shelley at 14:01 No comments: