It is not every day that a postcard gets on the front page of the newspaper, but that is just where this postcard from the Valentine & Sons Publishing Company wound up on January 23 this year. Here is an image of it from my collection: 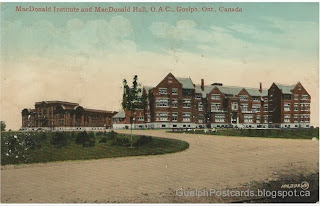 The story on the front page of the Guelph Mercury is about how MacDonald Hall will be changed from a women's residence into the new home of the College of Management and Economics at the University of Guelph. It must be exciting for the College to find a unified home, as its components have apparently been housed in scattered locations up until now. The change is also appropriate in a way, since the original purpose of the Hall was to house students in the Home Economics program started over 100 years ago.

As the article mentions, the Home Economics program was the brainchild of Adelaide Hoodless, the wife of John Hoodless, a wealthy Hamilton furniture manufacturer. Hoodless, it seems, had become concerned about the effect of industrialization on women. Industrialization, and the city life that came with it, opened up jobs for women in factories, stores, and offices. In her view, the social roles provided by such jobs ran counter to the roles that women were best cut out to play, that is, domestic roles as wives and mothers. 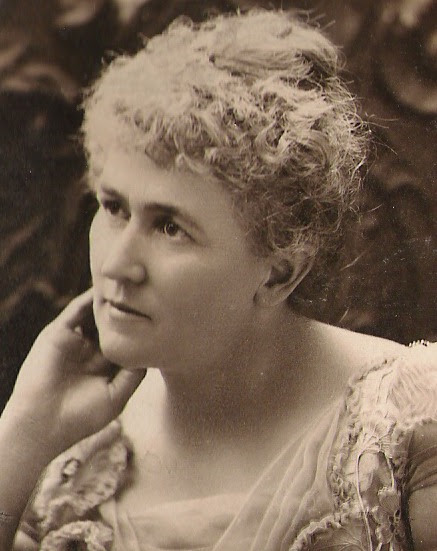 Being what we would call a social organizer, Hoodless sought to solve this problem by setting up an Institute where young women could learn the domestic arts, a program of study known as "domestic science", "household science", or "home economics". The MacDonald Institute (shown on the left in the postcard above), was created in 1903 to provide this education. It was funded by Sir William MacDonald, the Montreal tobacco magnate, after whom it was named. MacDonald Hall, also funded by, and named after, the great philanthropist, opened the next year to house the students of the Institute. (It is the building on the right in the postcard.)

Postcards of the buildings were popular with the young women who lived there. They would often send a card home to show their families where they were doing their studies. For example, I have a charming note from a young Miss Lena Revell to Miss Hanna Mount of Mountsberg, Ontario (Sept. 2, 1912):


Macdonald Hall, Guelph, Ont., Dear Hannah :- This is a lively place, no chance to get lonesome. A elven [sic] of we girls had a swell picnic up at the Speed River Sat. afternoon. took two canoe boats & two row boats. wish you could have seen our basket. Ha! Ha! The girls are having their initiation tonight. expect a high time. you will notice my bedroom window marked on other side. (write soon) Lena Revell


Miss Revell is listed in the 1901 census as born in 1895 in East Flamborough, the second of three daughters of Charles and Pheobe Revell. So, she would have been 17 years old when she attended the Institute. It seems that she and her classmates were having a good time. I wonder what the "initiation" was.

By the way, if you want to know where Lena was staying, see if you can find her pencil mark on the front of her card (this one printed by Warwick Bros & Rutter): 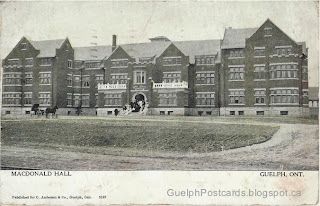 The mark is underneath and around a first-storey window two panes in front of the horse.

The arrival of a group of unmarried young women on campus clearly presented unique social opportunities for the girls, and also the young men of the Agricultural College, who were housed at the Main Building nearby. As a result, these opportunities had to be carefully regulated, as noted Gloria Troyer ("Agriculture for Women at the O.A.C", Wellington County History, 1999, p. 46):


"Mac" girls were allowed to take some short courses in OAC departments, for example Chemistry, Dairying and Horticulture; but they were taught separately from the men.
Meals were also segregated. Mac students ate in the dining room in Macdonald Hall and the "Aggies" continued to eat in the dining room in Johnston Hall. In 1914, when Creelman Hall was opened, men and women ate in the same dining room, but still had to sit at separate tables.


John Kenneth Galbraith, the famous economist who studied at the O.A.C., gives us an interesting perspective from the other side of the gender divide on campus (quoted from his autobiography "A life in our times" in Wellington County History, 1999, p. 86):


Across the streetcar tracks from the main campus were the buildings where women students were taught the rudiments of home economics, with impressive attention also to feminine decorum and virtue. Their part of the college was called Macdonald Institute after the leading Canadian tobacco manufacturer, but this involved no concession whatever to his product. The girls, as they called themselves, united on ceremonial occasions to cry out in unison:
Rootely toot; rootely toot.
We are the girls of the Institute.
We don't smoke. And we don't chew.
And we don't go out with boys who do!


Clearly, Galbraith was impressed, although maybe not with the poetry. Although he attended the OAC in the late 1920s, it may be that the chant was recited by earlier students such as Lena.

In its 110th year, the Hall goes from the house of Home Economics to the College of Management and Economics. Well, it is good that the old building will continue to be wanted and occupied. But there will no longer be a women's residence on campus, it seems.

P.S. It is difficult to get a good view of the Hall on Street View because of the verdant foliage. However, the image below is a good approximation that provides a glimpse of the Hall and the MacDonald Institute on its left, as seen from College Avenue.

Posted by Cameron Shelley at 14:34 No comments: