Princess Coretta and the Royal City

The Royal City has played host to a number of royal visitors over the years. For example, the Prince of Wales paid a visit in 1919. However, Princess Coretta was a different kind of royalty. Her status arose not from being born with blue blood but being born of small stature.

Here is a real-photo postcard (that is, a photograph printed onto postcard stock) of "Princess Coretta" taken by the popular Guelph photographer, Lionel O'Keeffe: 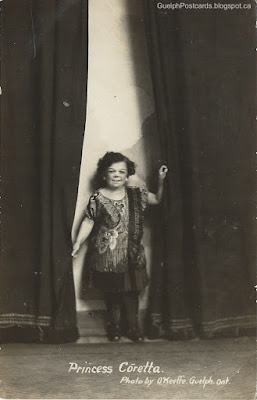 Princess Coretta was born Ruby Belle Rickoff in Chancy, Clinton Township, Iowa, on 11 January 1899. She was the only daughter of Arthur and Birdel Rickoff. It must have been clear early in her life that she was different. In 1905, she was exhibited with the T.I. Cash Carnival Co. as a sideshow curiosity. At that point, she was entitled "Coretta, the doll lady" and described as "the cutest, sweetest bit of humanity ever born to live. ... Weighs 16 pounds and only 26 inches in height" (Aberdeen Democrat, 30 June 1905).

Evidently, the exhibition was a success. Her father placed an ad in The Billboard, an entertainment trade magazine, offering her services for the following year (2 December 1905):

It seems that the Cash Carnival Co. made the highest offer, as Ruby, now entitled "Little Coretta", toured with the show again in 1906. For example, she appeared in the Woodmen Carnival in Oakes, North Dakota that year (Oakes Times, 28 June 1906).

The Bismarck Daily Tribune (7 July 1906) described her as nine years old, 16 pounds in weight, and 26 inches high. It also explained that, "She reads, writes, and talks well and will sing like a fairy when asked to," from which it appears that singing was an important part of her act. It also mentions that she had received a letter from President Teddy Roosevelt, who had seen her the previous year out east. Undoubtedly, the association with the President increased her celebrity.

The Woodmen Carnival provides a fairly typical portrait of sideshow "freak" exhibitions of the era. The Carnival took over the main street of Oakes for several days. Shows included dare-devils such as the "Death Cage" in which the Gregg brothers road on "wheels" around the inside of a large tub, presumably narrowly missing crashing into each other.

Performers would imaginatively re-enact tumultuous historical events such as "Ben Hur", the "Destruction of San Fransisco", and, closer to home, the "Northfield Bank Robbery."

A Ferris wheel slung occupants into the air above the rooftops of their small town.

In addition, there was often a menagerie of exotic animals, such as lions and elephants (although the Cash Carnival seems not to have had them). Similarly, there were human oddities, such as the bearded lady, conjoined twins, giants, and dwarfs or midgets. That is where Coretta fit in. For a few cents, townsfolk could meet and examine these unusual people up close and perhaps see them perform.

Another real-photo card of Coretta, also printed in Canada, shows her with "Dave Savage", styled as "the largest in the world." Pictures of very tall and very small people together were a common motif with sideshows. Perhaps "Dave" was in the same sideshow with Coretta. 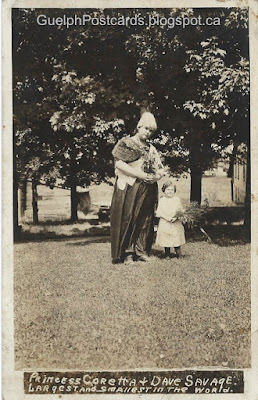 Snippets of Coretta's career can be found in some American newspapers. For example, the Chicago Daily Tribune (6 April 1908) notes that she celebrated her nineteenth birthday in the Coliseum there. It sounds as though the Ringling Bros.—then her employers—decided to add ten years to her age, perhaps to make her seem less childlike.

The party was celebrated in true, circus sideshow style:


The table was spread in the Coliseum annex on the top floor. Coretta, who wore a green silk frock, sat on the right of Lew Graham, who manages the museum. On his right sat little Lord Robert, another midget, 21 years old. When the guests insisted upon it the two little people walked down the center of the table as graceful as you please and performed a few stunts. Each is twenty-two inches in height.
Just across from George Ade sat Ella Ewing, the Missouri giantess.
There was an original poem by Grace Gilbert, the bearded lady; a speech by J.G. Turner, the Texas giant; and some imitations by Charles Andress.


Hm. It sounds like Coretta also lost four inches in height since 1906!

The next year, the New York Times (28 March 1909) carried the news that Little Coretta and Little Lord Robert were to be married! The story describes how Coretta was affected when she heard news of Lord Robert's diagnosis of appendicitis by the circus doctor:


When Coretta heard that she burst into tears and climbed down from the platform. ”Take me to him,” she cried. “Take me to him at once.”
A.T. Ringling, one of the five circus brothers, was standing near. He would not hear of Coretta leaving just as the matinee was about to begin, and the crowds were entering the Garden. Coretta pleaded.


Upon hearing of the engagement, Mr. Ringling relented and the circus began to plan their wedding.

If this story sounds a little contrived, it is. Staging weddings between members of the freak shows was a common maneuver to gain press coverage and drum up business. Probably, a wedding was staged later that year but only as a stunt.

As it happens, the Times story also describes Coretta as 19 years old and 19 inches tall. So, she had not aged since the year before but had decreased three more inches in height!

It is hard to know just what to make of the life of an Edwardian circus midget. As Rachel Adams points out, exhibiting people with disabilities or other unusual conditions seems exploitive. Today, emphasis is placed on integration of such people into society through accessibility legislation, for example. Putting them on display for a fee, like the animals in the circus menagerie, seems degrading and dehumanizing.

At the same time, Adams argues, it could be viewed as empowering for "freaks" to demand money in exchange for being stared at. Otherwise the subject of public gawking, sideshow performers can, to some extent, turn the tables by assuming the roles of actors and singers, a position that gives them some control over their audience and enhances their agency in their dealings with others.

And then there is the practical matter of earning a living. In a world where many occupations were closed to them, sideshow performers could earn good money. Issac Marcosson ("The Bookman", June 1910) itemizes the earnings of midgets including Coretta:


When you come to midgets you touch some of the sideshow stars. Tom Thumb got $1,000 a week for a long time, and so did his wife. Admiral Dot, who was a famous midget, got $700. Chemalh, the Chinese dwarf, received $250 a week. The interest in these little people is as keen today as ever before. Little Coretta, the midget of the Ringling Show this year, gets $350, and her diminutive contemporary, Weeny, who is with the Barnum and Bailey Circus, gets about the same. The ordinary museum or small show midget gets only from $50 to $75 a week. Such side-show staples as the Ossified man, the Living Skeleton, the Armless Man, the Tattooed Man, the Man With the Rubber Skin, and the Snake Charmer, have declined in price during the past ten years, and their wages range from $30 to $50 a week.


By shopping her out to sideshows, was Coretta's father, Arthur, exploiting her or helping to ensure her welfare? From what little information is currently available, it is difficult to say.

It would be interesting to know what Coretta herself thought of this matter. Unfortunately, she was killed on 23 May 1912 after being thrown from a buggy in Kankakee, Illinois. Evidently, she had left Ringling Bros. for the Mazeppa and Greater United Shows circus and was riding, perhaps in a parade, with manager J.B. Warren when the horse took fright at a hat blown through the air and bolted (New York Clipper, June 1912).

Her remains were returned to Clinton Township, Iowa, where she was buried in the Springdale Cemetery using her proper name, Ruby Belle Rickoff.

The alert reader will have noticed that I have not said when Princess Coretta visited the Royal City. That is because I am not sure. She was with the T.I. Cash Carnival Company in 1905 and 1906. To the best of my knowledge, this company never left the United States. From 1908 through 1911, Coretta was employed by the famous Ringling Bros. However, they did not visit Guelph during this time. (Circus tour routes can be checked at the very helpful CircusHistory.org website.) She was killed in 1912 before the Canadian circus season started, usually in June.

These observations suggest that 1907 might be the time. Guelph was visited by the Hargreaves Railroad Show on 17 July of that year. And, the Show did include "freaks".

A significant problem with this theory is that Lionel O'Keeffe, who took Coretta's portrait, did not set up business in Guelph until 1912. He purchased J.H. Booth's studio that year on Macdonnell Street above the Dominion Bank. I surmise, then, that he took the picture earlier in his career and, perhaps, printed off copies upon hearing of her death after setting out his shingle.

It may be, then, that Princess Coretta never set foot in the Royal City. Yet, why would Guelphites be interested in photo postcards of her if she was not known to them? For the present, like much else about Ruby Belle Rickoff, it remains a mystery.

It is interesting to consider why the citizens of Guelph and other cities were so drawn to sideshows featuring Princess Coretta and others like her. Of course, midgets, giants, conjoined twins, bearded ladies, etc. were unusual, like tigers and elephants. In the context of a sideshow, having paid for the privilege, people could marvel at them without feeling self-conscious.

But, besides being exotic, perhaps these shows confirmed the appropriateness of the normal order. Midgets, giants, etc. walking about the streets, as if to pass as typical people, might seem threatening to others. Encountering them instead in special venue, on the edge of town during a special event, while weird or even shocking, could be filed away as a momentary oddity that threw the normal and proper world order briefly into sharp relief.

I have yet to find any mention of Ruby Belle Rickoff, aka Princess Coretta, in any Canadian newspaper or other record. So, if you can shed any light on her connection with Canada, as suggested by these two postcards, I am sure that readers would appreciate you leaving it in the comments below. Thanks!

Posted by Cameron Shelley at 19:18 No comments: