The wreck of the Royal City hay train

Although postcards typically recorded prominent places or structures, they also served as a popular way to capture current events. Parades, family reunions, and visiting dignitaries were often shot and duly immortalized on postcard stock. However, one sort of event almost certain to tempt local shutterbugs was a disaster. A good train wreck, for example, often provided compelling photographic imagery.

As the late Stephen Thorning pointed out, newspapers were keen to report train wrecks, knowing how people enjoyed reading about them. Before the automobile era, many readers were regular rail passengers. They could relate to the ups and downs of rail travel and knew that derailments were not uncommon:


There were many incidents on railways that were not major wrecks, but which resulted in injuries and destruction. Historically, railways had a cavalier approach to safety, especially that of employees.


With that in mind, have a look at the real photo postcard below. 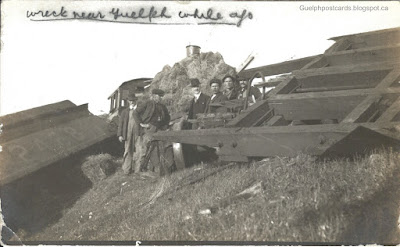 The image shows a scene of disarray, with a broken framework on the right, an upset train car on the left and a group of men standing in between, looking a little hesitant. A locomotive stands in the background, obscured by a sizable pile of hay.

Interestingly, the message on the back says nothing about the wreck whatsoever. Postcards of disasters were often sent with banal messages, as if the damage depicted on the front were for visual interest only. However, a caption written on the front says, "wreck near Guelph while ago." At least this information gives us a place to start in tracking down this derailment.

A copy of this card in the Civic Museum archive attributes it to a wreck that took place in 1933. This attribution can be ruled out because the card above is dated "Sept. 13/12". This date is confirmed by the cancellation slogan, "Broadview // Boys Fall Fair // Sept. 19–21 // Toronto Y.M.C.A.”, a slogan used only in the late summer of 1912. So, the photo cannot be from a later time.

But, how long is a "while ago"? There had been a number of train wrecks in the preceding years. However, details in the photo help to pin it down. In the photo, the upset car on the left appears to be a coal tender, that is, a car attached directly behind a locomotive that carried its coal fuel. The framework on the right is likely the tender's undercarriage, suggesting that the car was sheared in two in the incident. Then there is the big pile of hay.

A derailment matching this description, near Guelph and shortly before this postcard was sent, is reported in the Toronto Globe (11 May 1912):


Guelph, May 10.—Grand Trunk way freight from Toronto to Guelph, with Engineer Williamson and Fireman Thomas Peters of Toronto, collided with the yard engine 100 yards east of Trainor’s Cut at 4.30 this afternoon and the line is blocked.
Engineer Williamson was taken to the General Hospital, his face badly cut, back badly sprained and bruised. All the others escaped by jumping. The yard engine was taking a load of hay to the Provincial Prison Farm siding. The operator at Rockwood, acting while the agent was on a holiday, forgot, it is alleged, to give holding orders to the way freight, and the two met head-on. The car of hay was completely telescoped, and the hay scattered down a fifty-foot embankment on both sides, and the tender and cab of the yard engine demolished. Only for the hay car both engines would have gone down the embankment. Trains to and from Toronto transferred passengers on each side of the wreck and then reversed their direction.


The Ontario Reformatory (popularly known as the Prison Farm) was located just south of York Road and west of Watson Road. It had a cattle herd that was maintained by prisoners as part of their reformation. The "yard engine" was traveling east hauling some hay for the cattle to the facility from Guelph when it collided with the way freight train traveling west from Rockwood along the Grand Trunk Railway line.

The line has high embankments between Cityview Drive and Watson Parkway, suggesting that this is where the collision occurred. Have a look at the map below.

The name "Trainor's cut" (sometime's "Traynor's cut") is a bit obscure. It is not written on any map that I have seen. I would guess that it refers to the place where the Grand Trunk (now Canadian National Railway) tracks bisect what is now Cityview Drive. It is given as the location of a number of train wrecks in this time period, suggesting that trains found the bend in the tracks to its east somewhat challenging.

The article says that the tender and cab of the yard train were demolished. The tender is likely the one found broken in two in the photo. The number painted on its side appears to be "2488". Happily, this Grand Trunk Railway locomotive is listed in a roster of CNR engines. It was an E-6-a Mogul type, built in May 1891 and scrapped in December 1925. (Thanks to Ray Verdone for providing this information!) I guess that the cab was repaired after this collision.

Another engine of the same type is shown in the picture below. 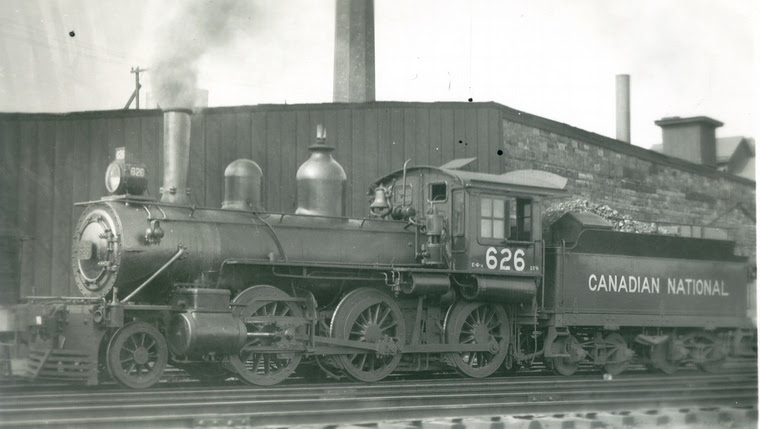 It would be interesting to know who the men are in the middle of the photograph. The gentleman in the centre may be a railway executive come to survey the damage and organize the cleanup. Or, could he be the operator in Rockwood? The others may be employees of the railway brought to the site to perform cleanup duties. Were any of them involved in the collision itself? Or, were they all just delivered by the locomotive in the background?

Also, does the shadow in the lower-right corner belong to the photographer and his camera? Could be.

The postcard was addressed to Ann Maria Fowke (née Norrish), who had emigrated from Guelph to Detroit with her husband in 1895. (It's not clear who sent it to her.) Hopefully, she enjoyed news of this minor disaster from the old burg! Today, it serves to remind us of how central train travel was in 1912 and also how perilous it could be.

Thanks to Jim Sorensen of the Ontario Electric Railway Historical Association and Ray Verdone of the Exporail Archive Centre for their help in interpreting this photograph!
Posted by Cameron Shelley at 17:53 2 comments: