Imagine that you wandered into A.B. Petrie's drugstore on Wyndham Street about 100 years ago, looking for a postcard. What would you expect to see? You would probably expect a rack of cards with pictures of Guelph looking back at you. These "view cards" depicted the city's prominent places or notable beauty spots. You might pick one up to send to a friend who collected such images, perhaps of bridges or post offices. Or, you might simply want to communicate that you had had the good fortune to be in the Royal City.

However, you would also find many postcards without local views printed on them. Instead, these generic postcards would have a stock image printed on the front. Stock images might include pictures of some random building or other scene, a drawing, or just text. So that these cards could still pass as souvenirs of the Royal City, the word "Guelph" would appear somewhere in the image as well.

Let us see what sorts of generic postcards you might find in that rack.

One of the most common sets of generic postcards of the city can be seen in the triptych below. These cards were evidently printed up on behalf of the Bell Piano and Organ Company. 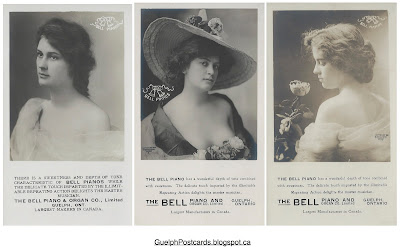 My guess is that none of these lovely ladies were residents of or visitors to the Royal City. Instead, they were models whose pictures were in a file of stock photos in some faraway cabinet. The printer is not named on the card, so it is hard to say exactly where they came from. Perhaps that is appropriate for a generic card: They are from nowhere.

These cards have been localized by the addition of printed text that sings the praises of Bell pianos and organs. Their pictures also contain little drawings of twin bells with the caption "Bell Pianos" underneath. It is not clear why pictures of these décolleté women were a propos for the sale of pianos. Perhaps it was merely a case of "sex sells." Or, perhaps a pun was intended: Belles to sell Bells. We may never know for sure.

At any rate, these cards are among the most common generic Guelph cards that I have seen. In addition, besides being from nowhere, they went nowhere: I have yet to see one that has been written on or mailed. Perhaps they were simply passed out as trade cards with the purchase of a Bell piano rather than being for sale in local stores.

A common form of generic card 100 years ago was the fill-in-the-blank card. These cards were usually conveyed with both a stock image and a stock phrase in which a space was left for the name of the locality in which it was to be sold. Fill-in-the-blank cards were advantageous for vendors because they cost less than cards with photographs on them and could be ordered quickly and in bulk for special occasions or just to fill holes in inventory.

Very often, fill-in-the-blank cards were humorous. Perhaps humor was used in order to make up for the otherwise nonspecific nature of the card. If recipients did not get to see a bit of Guelph, then at least they could enjoy a laugh. A couple of examples will give a good idea of the type. 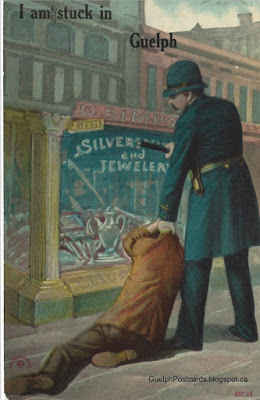 Here, the generic message "I am stuck in ..." is filled out with "Guelph". The message also shows that the image, which seems very serious in its own right, is part of a gag, with "stuck" substituted for "beaten and imprisoned for trying to rob a jewelry store". The publisher was the Rotograph Co. of New York.

Gags like this were available in rural as well as urban settings. Consider the following tall-tale postcard purporting to show turnips harvested in Guelph. 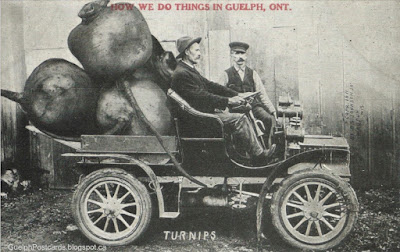 Good for a laugh, especially as the use of photographic manipulation is obvious enough. If that were not sufficient, then the text written on the image in front of the car, stating "Corpr. 1911 // By A.S. Johnson Jr. // Waupun Wis" certainly gives the game away. Mr. Johnson just could not resist the chance to sign his handiwork!

A particular species of the fill-in-the-blank card is the pennant postcard. In pennant cards, the blank occurred inside a triangular space in the shape of a little flag. Sometimes, the pennant was presented in the form of a little piece of felt actually glued onto the card. Here is a typical example. 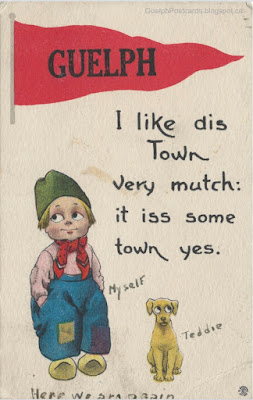 This pennant card is also an example of the "Dutch kid" genre of postcard. These cards typically had a picture of one or two Dutch children, signified by their stereotypical, Dutch peasant clothing. The kids do something cute and say something childish in a Dutch accent, rendered by phonetic spelling. Dutch kid cards were a popular "meme" through the 1910s, for reasons obscure to me. The card was printed by the Bergman Company of New York, which apparently specialized in comic cards.

In the generic cards above, stock images reside in the foreground while the local name, "Guelph", is in the background. However, Petrie's rack probably also had cards where the arrangement was the other way around. That is, the name "Guelph" featured prominently while the stock image was somewhat less emphasized. Consider the following example. 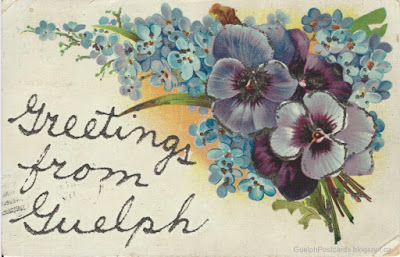 On this greeting card, the caption "Greetings from Guelph" was written by hand using a special, sparkly ink. These cards were typically made in Germany, this one being from "PFB", which is Paul Finkenrath in Berlin. The big hand-written lettering and fancy ink help to draw attention away from the generic flower image in the other corner of the card.

Like the pennant cards, these floral cards might even have decorations glued to them. Consider this example. 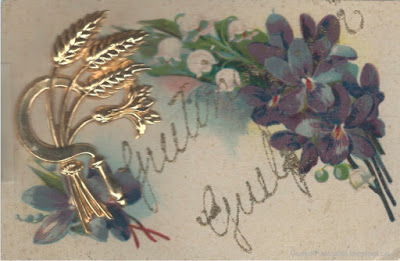 This card has a sheaf of wheat with a sickle glued somewhat incongruously next to the usual bouquet. Although it was published by the Stedman Bros. of Brantford, it seems likely that it was a stock card imported from Germany and then customized by the Ontario firm.

A final type of generic card that likely adorned Petrie's store was one where the local name was emphasized within the stock image itself. What would you think when you found the following card? 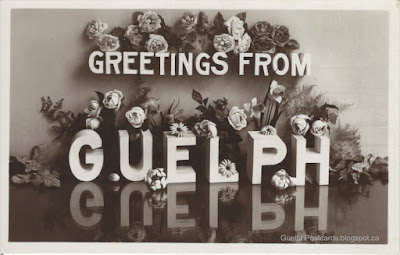 Generic "Greetings from <insert town here>" with a bunch of cut flowers lying around was a common setting. This example came from the Rotary Photographic Co. of London, so named for its use of rotary presses. Although Petrie's customers might have felt patriotic buying British name-and-flower cards instead of German ones, the Rotary Company was actually a subsidiary of Neue Photographische Gesellschaft of Germany! The postcard business was truly an international one.

Whose job was it, I wonder, to arrange and photograph oversized letters to spell out the names of half the towns in the British Empire to be immortalized in postcards? Today, it would be done by an unpaid intern, I'm sure.

A similar type of card spelled out town names using faces. Here is an example printed by Warwick Bros. and Rutter Ltd., Publishers, of Toronto. 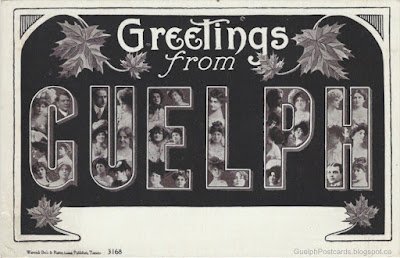 Patriotic maple leaves adorn the corners. The faces in the collage were probably those of Edwardian actors and actresses whose pictures might have been printed elsewhere on their own postcards. Buyers might have had fun trying to make them all out. Unfortunately, I do not recognize any of them. However, if you do, then please note them in the comments!

Many customers went into Petrie's store, and others like it, looking for Guelph cards that depicted its prominent places and beauty spots. However, some would have been looking for Guelph cards that were localized simply by having the word "Guelph" printed somewhere on the front. Petrie might have favored generic cards because they were cheaper than the other sort or because they allowed him to quickly make up numbers during times of high demand. For customers, generic cards may have been preferable if they were looking to send a message rather than a souvenir.

So, as you pick through Petrie's offerings, you might find that a generic Guelph card suits your purpose just fine. Don't forget the stamp!

Of course, Guelphites also would have found completely generic cards in their stores, that is, cards with no localizing detail at all. I leave these cards for other occasions.

In addition, just to prove that every classification scheme has exceptions, I should note that some generic cards also conveyed local views. Here is a good example. 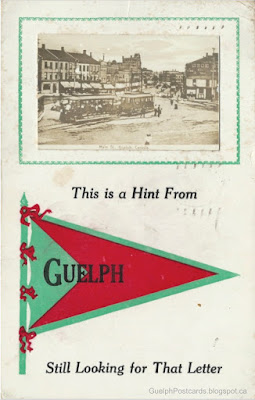 This hybrid card is a generic, pennant card with a smaller postcard image—complete with its own minute caption— embedded at the top. Evidently, this card was for customers who wanted everything or who simply could not make up their minds. Mr. Petrie had something for everyone!

Posted by Cameron Shelley at 15:49 No comments: