Xmas decorations abound in the interior of church of St. James the Apostle in Guelph. This real-photo postcard, printed sometime around 1910, shows a profusion of cedar streamers suspended from the ceiling lamps and attached to the side walls. Each lamp, with its many art-nouveau tendrils, adds to the overall, woodland mood, as do the many ferns on the floor. A spruce tree sits beside the pulpit on the left, which is itself nearly concealed by wreaths. Four stars-of-David hang on the back wall of the chancel, with a five-pointed star above the altar. Two ribbons on the chancel wall either side of the altar appear to convey a phrase from Ephesians 5:25: "Christ loved the church" + "and gave himself up for it." 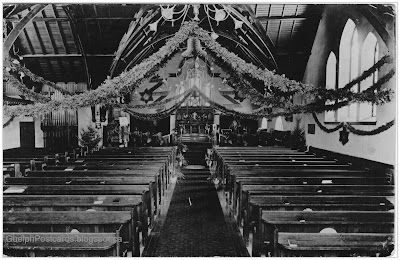 Compare the postcard photo with one I took recently from about the same vantage as the original photographer. 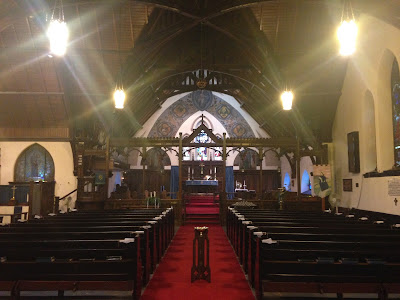 One obvious difference is that the church is not decorated for Xmas yet in this view. In addition, the lighting has changed and the church now has a rood screen between the nave and the chancel. The screen is a feature of medieval church architecture that separates the choir and clergy from the congregation. The rood screen in St. James was installed in 1919 in memory of Lt. John Ronald Campbell, a member of the church who was killed in the Great War (Mercury, 14 Apr. 1919). The presence of the screen suggests something significant about the origin of the church itself.

During the Protestant Reformation, rood screens generally fell out of favour in English churches and thus were removed or destroyed. However, in the tumultuous times of nineteenth century religion, the Oxford Movement advocated for a return to medieval practices of worship. Luminaries such as A.W.N. Pugin revived Gothic church architecture, including rood screens, which influenced Anglican church design particularly, and contemporary church architecture in general.

The winds of change carried all the way to Guelph. As Terry Crowley ("Building the unfinished church"; 1989) explains, Thomas Willcocks Saunders led a group of parishioners of St. George's church who supported the Oxford Movement. A local lawyer and police magistrate, Saunders was elected as the people's warden for St. George's in 1889. He advocated for division of the parish and was successful after a somewhat ructious debate. A new parish was created on 3 March 1890 in the St. James ward of the city, after which the new parish was named, where St. George's had a satellite mission in a local school.

Then came the matter of a new building suited to the new parish. Parishioners congregated in the gymnasium of the Guelph Collegiate Institute (now GCVI) while a property was acquired. Lot 21 on the corner of Glasgow and Paisley streets, once home to Robert Stewart's steam-driven planing mill, was purchased from Robert Hadden. Toronto architect Richard Cunningham Windeyer was engaged to design the structure. Local architect John Day become the general supervisor, with stonework by Slater & Keleher, plastering by William Robinson, painting and glazing by John Moffat, and gas fittings by George Feek & Co. Stone was taken from William Slater's quarry south of Waterloo Avenue at Dublin Street (then Devonshire Street), making St. James the last of Guelph's churches to be made with local stone.

Decorating the church for Xmas would have taken place at the conclusion of Advent, that is, the Sunday immediately before Xmas itself. A typical celebration around the time the photo was taken would be like the one from 1911 (Mercury; 23 Dec. 1911):


The church rector was Caleb Henry Buckland. Buckland became a prominent member of the Guelph community after becoming rector on 20 August 1906. An enthusiastic Orangeman, Buckland was a staunch supporter of the British Empire. During the Great War, Buckland helped to organize the Guelph 29th Overseas Battery of Canadian Field Artillery and served as a chaplain with the rank of Captain from 24 October 1915 until 12 July 1919. He was awarded the British War Medal and the Victory Medal. After his return to Guelph, he was elected M.P. in the Wellington South riding with the Conservative Party (20 October 1919). He resigned after four years to assume the position of Superintendent of the Childrens Aid Societies of Ontario.

So, this year will mark the 124th Xmas for St. James the Apostle. Hopefully, there will be many more to come! Happy holidays!

Thanks to Ann Murray for allowing me into St. James to take the photo above!

Comments welcome, as usual, but especially if you can date the postcard photo more accurately!

Posted by Cameron Shelley at 14:29 No comments: