The ghost garden of the O.A.C.

Today, Guelphites and University of Guelph students know Johnston Green as the large and pleasant lawn encountered while traveling to campus from the direction of downtown. Surveyed by the Johnston Hall tower, the green is a favourite spot for seeking verdant relief from the built environment of the campus. However, it has not always been simply trees and grass. Once, it was graced by a large, formal flower garden.

The old flower garden may be viewed in the postcard below, printed by The International Stationary Company of Picton, likely shortly after 1910. The photo was taken from the top of Massey Hall, next to the green. 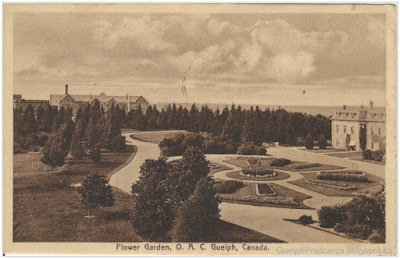 The sepia hues are the card's original colouration and not due to aging.

The garden layout is formal and geometrical. It is roughly an oval, divided into quarters by gravel paths. In the middle is a round flower bed. Each outside quadrant features four flower beds: three arranged radially and one, triangular bed placed near the long ends of the oval. Each bed appears to feature a single variety of flower or, perhaps, one variety surrounded by another.

Another postcard shows a reverse angle, taken from the Main Building with Massey Hall and the Biological Building (now the MacLachlan Building) in the background. To the right lies the garrison gun known as "Old Jeremiah", sitting in a graveled notch (hidden in the first image), pointing down the Green away from the Main Residence. 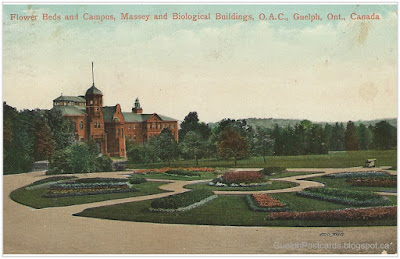 This postcard was printed by the Valentine & Sons Publishing Co. around 1910, and gives a more colourful idea of how the garden may have looked.

The placement and form of the flower garden were not the result of some last-minute decorative impulse. Kaars Seipesteijn (1987, pp. 38ff) points out that the garden played a central role in plans for the Green from its inception.

In 1882, well-known American landscape architect Charles H. Miller of Miller & Yeates, Philadelphia, was hired to create a master plan for development of the growing Ontario Agricultural College (O.A.C.). The Ontario Fruit Growers' Association, which had helped to establish a campus Arboretum, prompted the Provincial government to spring for a formal campus plan to be drawn up. Since the O.A.C. had been modeled on US land-grant colleges, it made sense to consult an American designer.

The Main Building had achieved its final form in 1880. So, the central concern of the plan for the Green was how to turn this field, which still bore the marks of Frederick Stone's plow, into a suitable lawn for this building. Miller's solution reflects many ideas of Frederick Law Olmsted, the "father" of American landscape architecture. Olmsted adapted the approach of the English Landscape school of architecture and had designed numerous American college campuses, though he remains best known for his work on Central Park in New York City.

Olmsted's influence is visible in the belt of trees that surround the Green and the semi-circular carriage driveway leading through it from Brock Road (now Gordon Street) past the front of the Main Building. The trees and driveway provide a little drama as the Main Building was "unveiled" only when travelers got quite close to it.

Another important influence on the design of the Green was the other "father" of American landscape architecture, Andrew Jackson Downing. Downing promoted the "gardeneque" style in which, among other things, flower beds were prominently featured. Downing advocated the use of formal flower gardens in the English style. Formal flower gardens could be used to designate important parts of the landscape such as the position of significant structures.

In his Treastise (1841, p. 364), Downing gives an interesting illustration of a set of English gardens along a circular walkway. In the illustration, flower beds are arranged "spottily" along the path and given blob-like shapes. The two exceptions are the beds behind the main structure in the lower left and the conservatory ("b") at the top. The latter beds, particularly, are round and highly regular in shape. 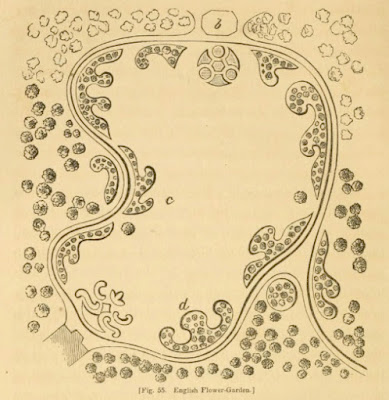 It may be no coincidence that the circular garden beside the conservatory bears a family resemblance to the O.A.C. flower garden. This garden was meant to provide a kind of transition or buffer, separating the relatively informal Green from the significantly formal Main Building. In short, the oval garden at the top of the Green was carefully designed to dignify the Main Building and mark it off from the more haphazard parkland below.

Perhaps Miller had this very illustration in mind when he designed the O.A.C.'s new flower beds.

The resulting layout of the Green can be seen in an aerial photograph apparently taken just after World War I. The caption reads, "Agricultural College, Guelph, Ont., taken from an aeroplane." The copyright notice attributes it to the Canada Post Card Co. of Toronto in 1919. Mills Hall appears to be under construction along the north side of the carriage way. The aeroplane's wing appears on the left edge of the photograph. 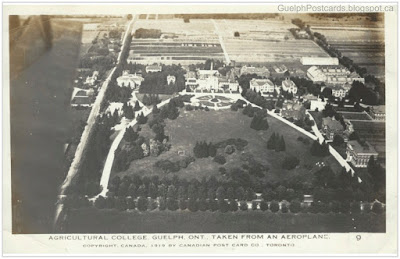 The significance of the flower garden at the apex of the driveway to the Main Building is readily apparent.

As the postcards above attest, the flower garden persisted through the early twentieth century. However, events finally overtook it. The first event was the adoption of the automobile. As more and more Guelphites drove cars, they demanded more and more pavement on which to drive them and park them.

The second event was the construction of the new Administration Building (now Johnston Hall) in 1931. When the old building was razed and the new one put up in its place, the opportunity was taken to install a paved road flanked with parking spaces, accessed by a lane from Moore Avenue (now College Avenue). The flower beds were torn out and paved over, and the cannon moved away to the south. Asphalt and automobiles—not flowers—now divided the building from the Green, as they continue to do to this day.

To be more precise, though, the flower garden was only half paved over. The half closest to Gordon Street was simply buried under sod. Thus, the gravel paths that once guided visitors around the beds still lurk under the grass. The result is that, during dry periods, the ghost of the O.A.C.'s flower garden returns to haunt Johnston Green.

In the postcard below, the gravel paths of the western half of the old flower beds are eerily visible as swaths of yellow grass in front of the Administration Building. 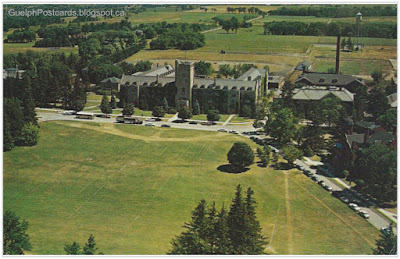 This postcard was printed by the Peterborough Post Card Co. around 1960.

These areas of extra-dry grass are known as parch marks. That is, the grass there can become parched quickly during a dry spell because of materials below the surface that prevent root growth or simply do not hold water as well as the surrounding soil. Aerial photographs taken during droughts can sometimes reveal subsurface features of archaeological interest, as they have recently at Stonehenge.

The summer of 2016 has also been a dry one. So, I was interested to see whether or not the paths of the old O.A.C. flower bed would return. Indeed they did, as you can see from this panorama taken on June 30.

The half-arc of the pathway can be seen sweeping to either side of Johnston Hall. In front of the arc is the gravel notch where Old Jeremiah used to sit.

So, if you are observant, and the conditions are right, you can follow in the footsteps of students and faculty from years gone by, walking on the paths of the ghost garden and standing where the cannon once stood guarding the end of the O.A.C. Green.