May 2015 marks the 100th anniversary of the writing of "In Flanders Fields", the poem for which John McCrae is famous. Although McCrae lived long enough to enjoy some of the admiration of his work, his life was cut short by pneumonia in 1918.

However, regard for his poem continued to live and grow even after the end of the Great War. Testimony to this fact resides in the many memorials and monuments dedicated to McCrae and his work. For example, a brass plaque eulogizing McCrae was presented to Guelph Collegiate (now Guelph Collegiate and Vocational Institute), his alma mater, on 13 November 1919. Many other memorials of various kinds have been dedicated to him over the years since, for example (Guelph Mercury, 30 April 2015):


And, of course, the McCrae House, where McCrae was born and raised, became a national historic site in 1966 and a public museum in 1968. It is now part of the Guelph Civic Museum.

Next to the McCrae house stands the John McCrae Memorial Garden. The basic layout of the Garden can be seen in this postcard printed by the Photogelatine Engraving Co., Ltd., Toronto, in Kodachrome in the early 1950s. 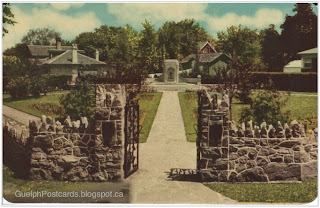 The photo looks into the Garden diagonally from the intersection of Water St. and McCrae Boulevard. Notable in this photo are the low stone walls and gateway formed by pillars on either side. Through the iron gate is a path that leads through flower plantings to the John McCrae shrine. A look at the site through Google Street View shows how little the memorial has changed and how much the trees have grown:

The shrine itself is more closely featured in the card below, also printed by the Photogelatine Engraving Co., Ltd., Toronto but from a photo taken in 1946 (cf. "The Torch" 1946, p. 32): 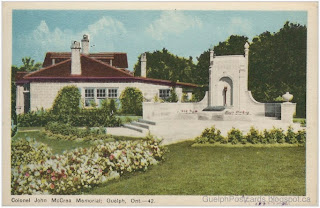 The shrine sits on a raised, dais and features a limestone block with the words "Lest we forget" carved on it. On top of the block is an open, bronze book with the verses of "In Flanders Fields" inscribed. At the back of the dais is a low wall featuring urns at either side. In the center is a memorial surrounded by carved torches and featuring an alcove with an inscription in memory of John McCrae and an illuminated, bronze torch in the center. Around the shrine are beds of flowers in which poppies are usually prominent. (A close-up photo of the monument can be found in the Guelph Public Library archive.)

The Garden and the House are well integrated and visitors move easily from one to the other. It is thus easy to forget that the Memorial Garden was established as a public monument some 20 years before the House. Considering the obvious association between McCrae and his birthplace, how then did the first monument to him in Guelph happen to arrive in the form of a garden next door?

The answer begins with the early history of Brooklyn, the area of Guelph just south of the Speed. By the early 1850s, a large block of the area belonged to Henry William Peterson Jr., a prominent citizen and local politician. The estate and its grand house were known officially as Ulmenwald ("Elmwood") and locally as "Peterson's Grove" (see "Ulmenwald"; Piper 2008). Its address was 122 Water St. and it included the land on which the Memorial Garden now stands as well as much more to the south. 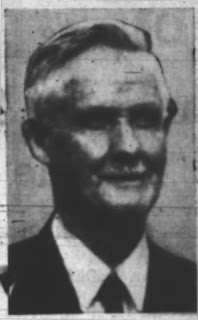 (Thomas Joseph Bedford, Courtesy of the Guelph Daily Mercury, 28 May 1947.)

In 1913, Bedford sold a farm in Guelph Township to the Jesuit Fathers, who began the St. Stanislaus Novitiate there. Bedford was an active man (Mercury, 28 May 1947):


He served at one time as councilor in Puslinch township, and was a firm Conservative in politics. He maintained a keen interest in livestock and for many years was a land valuator for the Guelph Trust Company. In the latter category, he travelled widely throughout the western part of Canada.


According to Vernon's City Directory for Guelph, the family lived in several locations in town before settling at Ulmenwald in 1928. In 1932, they relocated around the corner to 49 Mary St.

It is not clear why the Bedfords moved into town but the family farm may have been insufficient to support the whole clan. In any event, many members found jobs in Guelph. In 1926, Bedford Motor Sales appeared on Quebec St. East (now in the Quebec St. Mall), selling Dodge cars. A photo of Thomas Bedford Jr. (misidentified as "I. J. Bedford") appears along with siblings Fred and John in a photo in the Guelph Civic Museum Archive.

By 1943, the national government was beginning to plan for the end of the Second World War. In particular, it was concerned about providing enough housing to meet the pent-up demand of soldiers who were to return from the conflict. Housing development had become a national and a local priority. So, Bedford was looking to sell the property at 122 Water St. and developers were looking to buy it.

At around the same time, the notion of memorializing John McCrae was raised. In the 1943 edition of The Torch (p. 21), the yearbook of the Col. John McCrae Memorial Branch of the Legion in Guelph, H. G. Hewitt talks about a suggestion made in a column of the Guelph Mercury:


Some months ago, an article appeared in the Guelph Mercury written about the names of the streets in Guelph. In that article, it was suggested that it would be nice if a street was named after John McCrae. The McCrae Legion has acted on that suggestion ...


The article Hewitt seems to have in mind is 3 March 1943, which talks about the development of new streets in Guelph and how they should be named:


If new streets in Guelph are to be opened or old ones renamed, the names chosen should carry on, as long as that street lasts, some worthwhile association. This is the suggestion made to the Guelph Daily Mercury by one of Guelph's citizens. He suggested that the name might be that of an important battle or engagement in which Canadians participated or will participate in the present war.


The article mentions Inkerman and Crimea streets, named after places from the Crimean War, as well as Vimy Ridge Road just outside the city boundaries. (The latter is now Laird Road and was the site of the Vimy Ridge Training Farm after the Great War and, by coincidence, was also the same road where Bedford owned other lots.) The article makes no mention of John McCrae.

Perhaps Bedford had read the same article and considered the matter. In any event, he approached the local Legion with the object of donating some property for a John McCrae memorial (Mercury, 1 Aug. 1946):

No one seems to have asked Bedford what gave him the idea or why he made the donation, so we can only guess at his reasons. Thomas J. Bedford Jr. had volunteered for the Canadian Expeditionary Force in 1916. There is a recruitment record for "Thomas Joseph Bedford", a resident of Guelph Township, birthday 7 October 1892, on 4 March 1916. No prior military experience is noted. Clearly, the recruiting officer mixed up Bedford Jr.'s name with his father's and mis-recorded Bedford Jr.'s birthday, which was 7 October 1891.

Curiously, there is a conscription record for "Thomas James Bedford", a resident of Guelph Township, birthday 7 October 1891, on 15 October 1917. On it, Thomas is recorded to have served 3 months with the 55th Battery. The 55th Battery was an artillery unit formed in Guelph in the spring of 1916, trained at Camp Petawawa over the summer, and sent overseas in September of that year. Apparently, Bedford Jr. trained with this unit in 1916 but did not depart with them. Perhaps he was needed back home to help run the family farm. Given the farm labour shortages of the time, farm work was considered as a reason for young men to remain home and support the war effort through growing food.

In any event, it appears that the Bedford family supported the war effort. In addition, the family name "Bedford, —" appears on the Honor Roll of the Order of Service for the dedication of the Guelph Cenotaph in 1927. This notation appears to signify that the Bedford family had helped to fund that monument. Whatever the details of his military service, this record suggests that Thomas Bedford also supported the construction of public memorials to Guelph's soldiers.

In any event, in 1943, Bedford donated a parcel of land for the Memorial Garden. The McCrae Branch of the Legion then proceeded with fundraising and planning efforts under the direction of Ivan Glover. The plans quickly outgrew the donated lot. Joseph Wolfond, to whom Bedford had sold the neighbouring property, agreed to donate another lot, enlarging the Garden's size from 140 x 50 feet to 140 x 100, the frontage on Water St. and the new McCrae Boulevard respectively (Mercury, 17 Sep. 1943). The enlargement suggests that the Legion was already thinking about integrating the Garden with the McCrae home next door (Mercury, 17 May 1944), then owned by Elizabeth Mowat Nind.

The work took time, not surprisingly considering that the country was at war. Architect A. C. Burnett Nicol of Toronto was retained to design the shrine itself and the Sharp Brothers Cut Stone Co., of Hamilton to build it. William Parker of Guelph received the contract to build the surrounding wall. The land was cleared, leveled and the wall built by the end of 1944 ("The Torch" 1944). Limestone for the shrine would not arrive from Indiana and Queenston for nearly another two years.

The Guelph Horticultural Society helped with preparation and planting of the grounds. The Legion set out to raise $10,000 to cover the costs. The effort began to attract wider attention. For example, the Toronto Star ran a piece about it (1 Aug 1945), noting that blacksmith Al Smith had made the wrought-iron gates for the entrance and showing a photo of Legion Branch president Charles Vince beside one of the entrance posts.

Finally, the shrine and garden were complete and opened officially on 6 August 1946, described in detail in the Mercury. A parade led by veterans proceeded from St. George's Square to the memorial site, where a ceremony of dedication took place:

Many postcards of the memorial have been printed since then. My own favourite is the following, imaginatively coloured picture taken in the late 1940s and published by Valentine-Black Co. Ltd., of Toronto. 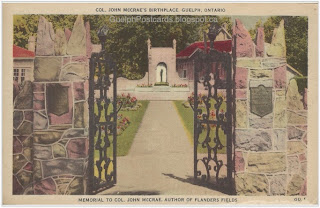 By framing the shrine and its flanking torches in the background between the two, spiky gate posts, the picture suggests that the posts themselves take the form of torches, though of a less formal sort. It is a kind of "rhyme" that I imagine John McCrae would have appreciated.

The garden and shrine continue to do good service, pleasing the eyes of visitors and dignifying the memory of John McCrae. I imagine that Thomas Bedford was pleased also. He died 27 May 1947 and is buried in Marymount Cemetery.

PS. Thanks to Kathleen Wall of the Guelph Civic Museum for help searching the Museum's archives.
Posted by Cameron Shelley at 16:27 No comments: