As we have seen, people have had many uses for postcards, from merely staying in touch to entering contests. Another use for postcards has been for people to report on and relate themselves to important events of the day.

This postcard of Knox Church on Quebec St. provides a good example. (Note that the message space is placed on the side of the front of the card and not on the back. This feature identifies this card as an early type, made from ca. 1900–1905 called the "undivided back". The entire reverse side was reserved solely for the destination address.) 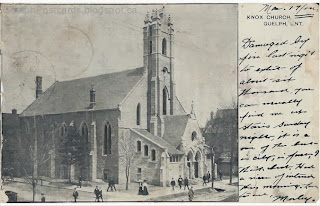 Knox Church can trace its origins to the so-called Disruption of the Church of Scotland of 1843. Presbyterians were divided over the role that the state should play in the affairs of the Kirk. Those who wanted to lessen the role of the State broke away to form the Free Church of Scotland.

However, there was dissent within the Free Church itself. In Guelph, this dissent resulted in the formation of two separate congregations breaking away from St. Andrew's church. One group was optimistically called the United Presbyterians, who erected a small building at Cambridge and Dublin Streets (long gone). The other group built a small chapel called Knox Church on Yarmouth St. in 1847 (Anderson, "History of Guelph", p. 112). (See a photo of this church here.) In the late 1860s, this site was sold to the Raymond Sewing Machine Company, which erected their factory along that block (Couling 1996, p. 12). The Knox congregation built itself a smart new stone church around the corner at the intersection of Quebec and Baker Streets. The cornerstone was laid in October 1868 (Historic Guelph, v. 1, n. 7). (See a photo of this church here.)

The vestibule and bell tower prominent in the postcard were added in 1900–1, along with an extension to the back to accommodate a new organ.

One reason why the preservation of Knox Church is remarkable is that the building suffered a major fire 110 years ago, in March 1904, the year it celebrated its diamond jubilee. The Guelph Evening Mercury of March 17 gives a detailed account of the blaze, its handling by the fire department, and its cost.

The fire seems to have originated in one of the church's two furnaces, the one in the south corner of the basement. On Wednesday, March 16, the church janitor started a fire in that furnace at about 3pm and remained until 4pm to see that it was burning properly. The fire was not large as the janitor had used only four coal scuttles instead of the usual eight. The reason for the spread of the fire was unclear, although the writer speculates that it may have migrated up the cold air return by igniting some stray, flammable material there.

In any event, flames spread from the furnace up the stairs and into the gallery on the main floor. Also, they ran between the basement ceiling and the flooring above, scorching much of that space.

The fire was noticed about 6:20pm, at which point the alarm was raised. Some citizens set to work fighting the blaze with extinguishers while the fire department was summoned. The newspaper gives a detailed account of how the fire department performed. The hose wagon was slightly delayed by slippery conditions but soon had five streams of water to bear on the flames. At that point, however, things seemed ominous for the church:


About the time the firemen came up an explosion occurred inside the church, and the one half of each of the windows on the side of the church looking toward Nelson Crescent [west], was forced out. A few moments later, a second explosion occurred, and the windows on the other side were all similarly affected. The large window and one of the smaller windows at the front end were also blown out. At one time, with the smoke pouring out of all the upper windows and mounting away up in the tower, it looked as if the whole building was doomed.


It must have been quite a sight!

Happily, though, the firemen were well-equipped and determined, and had the blaze under control by 8pm and extinguished by about 10pm.

They did this in spite of facing several difficulties apart from the fire itself. The paper reports that, in addition to the slippery conditions, other vehicles did not clear off the road. The hook and ladder truck had to swerve around a "bake cart", causing it to overturn and strike a bystander who was thrown into a ditch, though not severely injured. The truck sustained some wheel and body damage. A fireman was accidentally struck "on the eye" by the axe of another although he somehow escaped serious injury. A hose burst when it was hooked up to a hydrant, and four respirators somehow went missing in the confusion which "... the firemen would like to have ... returned as soon as possible."

Although the building was saved, there was substantial damage. According to the Mercury of March 21, 1904, the insurance appraisers put the total cost of repairs at $6190, of which $750 would go towards the restoration of its new organ. Happily, the church had $10,000 in coverage, so repairs could be undertaken immediately. In the meantime, the congregation held services in the Opera House on Upper Wyndham St.

It is easy to imagine how eager people would be to spread and discuss news of this major event. Our postcard certainly testifies to that. Here is the message from the side of the card, sent the very next day after the fire:


Mar 17/04 // Damaged by fire last night to extent of about six thousand. You can usually find me upstairs Sunday night. It is a one [sic] of the best in city, in fact, I think best. Had a view of interior this morning. Love to all. Morley.


The addressee is "Mrs. J. C. Allens, Brooklin, Ont". No publisher is identified.

I am not certain who Morley was. However, a "Marley [sic] Walker" is listed in the Vernon Street Guide to Guelph (1917) as a clerk in the city Post Office. This person is likely the same Morley Walker who later became the Postmaster from 1936-1945. A Morley Walker is also listed in the Program of 100th Anniversary Services for Knox Presbyterian Church (1944) as Chairman of the Centennial Committee. Since "Morley" was not a common name, it is plausible that these various records refer to the same individual. The 1901 Census lists Morley as born in 1882 in Wellington South, so he would have been 21 years old when the fire occurred. Perhaps young Morley was doing some clerical work for the church at the time while also getting started at the Post Office. How appropriate, then, that he should use a postcard to relate news of the fire!

Knox Church was repaired by and reoccupied on July 10, 1904. With the trauma and excitement of the blaze behind them, the congregation and the general population of the City went on with their lives. Memory of the blaze faded from mind but a glimpse of it and those affected by it are afforded again through this postcard.

Posted by Cameron Shelley at 12:50 No comments: