Picture postcards were introduced in the Edwardian era as souvenirs and as collectors items. Yet, as often happens with popular products, consumers soon found new uses for these cards. In particular, postcards often showed images of significant local buildings, such as churches, court houses, and schools. In Guelph, many postcards showed images of the Ontario Agricultural College (OAC) and the Macdonald Institute and Hall. These cards could be sent away to show off Guelph's interesting structures or to please collectors of images in those categories.

However, postcards could also be modified to convey extra information relevant to the sender and the addressee. Anyone who collects Guelph postcards will soon notice that more than a few are marked by their senders with an "X" at a place of special significance. For example, consider the following card of the then-new Macdonald Institute and Hall, produced by Charles Nelles: 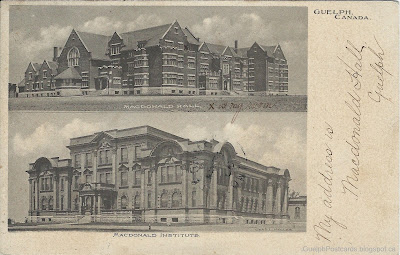 The sender, Miss Margaret Smith, has put an "X" beside a third-storey room in the middle of the top picture with the notation, "X is my room" underneath. Beside the pictures, in her meticulous handwriting, Margaret adds, "My address is Macdonald Hall, Guelph." On the reverse, she writes:


Dear Uncle:—This is a picture of our home and school. Hope you are all well, poor Carolyn is having sick time in Toronto. Lovingly, Margaret Smith.

Of course, the modification is a simple one. Still, it changes what was a generic image meant for mass consumption into a personal representation, specially meaningful to Margaret and her uncle at an important time. Her stay at the Macdonald Institute may well have been Margaret's first prolonged time away from home, in a place where she would learn how to run a household of her own.

Besides their accommodations, young women at the Institute used postcards to indicate where they conducted their studies. The card below is typical: 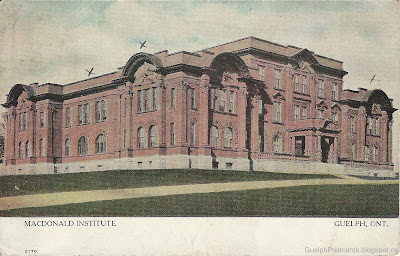 Three Xs hover determinedly over rooms of the building. On the back, their significance is explained in the accompanying message:


Dear Auntie,—I am feeling fine and we all are. The places which I have marked are the places where we have domestic science. G.B. from G.H.


No doubt, the postcard was selected because it provided a vantage of the rooms G.B. had her classes in. It was sent in 24 Feb 1908.

The young men at the OAC were no less interested in communicating where they lived and worked on campus. One student, whose initials appear to be CTA, sent this card to his friend Keith to keep him up on current events. 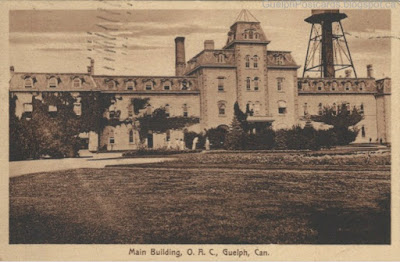 In the message, we learn about the writer's academic progress and his attitude towards marriage:


O.A.C. 30/14 // Dear Keith—Mighty glad to get your card. better use multiplication table & make it a letter. I pulled turnips about as big around as a foot ball one afternoon this week. Haven’t got my false head yet. Have been doing lots of studying lately. Hear Bert Milliken is married also Russ. Feel awful sorry for them. CTA (??) I live in room X.


Careful examination of the picture shows an "X" in the third-storey window just to the left of the central mass of the Main Building (since replaced by Johnston Hall). The card is postmarked 30 October 1914.

As did the young women of the Institute, the young men of the OAC used postcards to show where they did their learning. In the card below, young R. Harris shows his Auntie Alice where he takes his dairy classes: 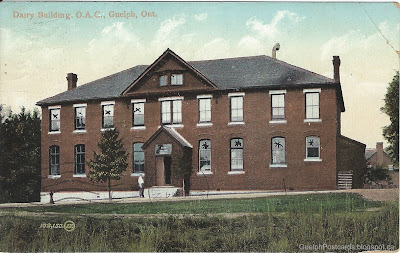 
Dairy School 13/2/08 // Dear Aunt. // Your card received & here is one in return. I wish I could get some more pictures of the Dairy Buildings. This is the Main building with Dairy Class room up stairs with X on windows. Creamery & Butter Making Dept. downstairs marked "*" on windows. Hope you are both well. R. Harris


The Dairy Department had several structures on campus of which this "Dairy Building" was the main one (since demolished). It was indeed the only dairy edifice to be shown on commercial postcards of the era. The postcard was postmarked on 14 February 1908.

Other buildings were occasionally marked with Xs by their occupants. For example, N.N. sent a postcard of the new Macdonald Consolidated School to Miss Barbour of St. Marys, Ontario: 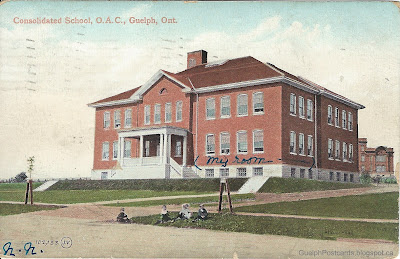 Instead of Xs, N.N. has used brackets and "My room" to indicate the first-floor classroom south of the main entrance, facing out onto Dundas Road (now Gordon Street). The Consolidated School was part of an attempt to improve rural education, sponsored by Sir William Macdonald, by concentrating rural students to central locations where they would have access to better facilities and teachers than were usually available in one-room schools. Assuming N.N. is a girl, she would have learned skills in cooking, sewing, nursing, and gardening in addition to the three Rs. Her room also had an excellent view of the lane next to the school where the vans would gather after class to take the children home. The card was postmarked on 18 November 1907.

Postcards of the OAC and Macdonald Institute are the ones most frequently modified in this way by consumers. This is likely because these institutions had a high turnover of occupants, many of whom wanted to inform their friends and relations about where they were off to school. However, postcards of other places were sometimes given similar treatment. For example, here is a postcard of the Opera House block in which Xs flag a couple of places of business. 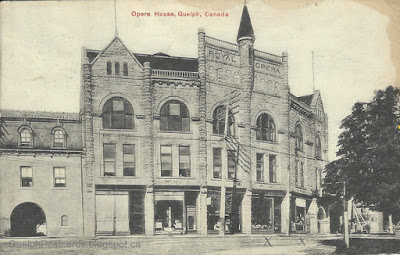 
Aug. 31/12 Hello Nellie:—This is where I am spending the holiday. Received your kind letter and will answer when I get back. The places marked x are my brother-in-law’s stores. Hope you are keeping fruit (??). Will


Interestingly, the Xs point to the Opera House Pharmacy, operated by Frederick Bogardus, the subject of an earlier blog post. The postcard was postmarked on 31 August 1912.

Since Frederick Bogardus was Will's brother-in-law, we can identify him as Wilfred Henry Hill, brother of Ada Maude Hill, who married Bogardus in 1910. Unfortunately, I have little further information about Mr. Hill to share. I hope he enjoyed spending Labour Day in Guelph!

Picture postcards could seem quite impersonal, the mass-produced ones being generic and disposable. However, people found ways to make these items more personal, such as marking Xs to designate places that were in some way special to them. Among Guelph postcards, these were often cards of the OAC and Macdonald Institute, which the young men and women, newly arrived in Guelph, would mark up to communicate some of the excitement to their friends and relations back home. When looking at old postcards, it is worth paying attention to these little signs for the glimpse they offer into the personal lives of those who put them to use.