The Edwardian era was the golden age of postcards. Also, as Anthony Vickery (2010) points out, it was the golden age of theatrical touring in North America. From 1896 until the Great War, hit plays produced in New York would tour the United States and also Canada. From Montreal as far west as Windsor and Sault Ste. Marie, plays produced in the Big Apple would tour from city to city while riding the rails.

Vickery explains that there were two ways in which this would transpire. Producers in New York owned or controlled theaters throughout the region and scheduled traveling shows at their convenience. These theaters were mainly sited in larger cities such as Montreal and Toronto.


Theaters in smaller towns were usually locally owned. Tours of these theaters were often negotiated through local entrepreneurs. In the Edwardian period, the local circuit in Ontario was managed by one Ambrose Small of Toronto. New York productions that played in Guelph were typically booked through him.


One such production was "Officer 666". This play was a "melodramatic farce" written by Augustin MacHugh and produced by the noted team George M. Cohan and Sam H. Harris. It played at the Gaiety Theater on Broadway starting in January, 1912, and was a hit. A review in the New York Times (30 Jan 1912) praised it for being comical and absurd:

All of which is carried out in broadest farcical spirit, with plenty of humorous situations, a large number of surprises, and considerable bright dialogue. At the conclusion Helen says to this effect: “I feel as if it couldn’t have happened except in a play,” and Gladwin replies, “It couldn’t.”


Popular and in keeping with the spirit of the times, it was sure to be a hit on the road. Naturally, a touring show was speedily arranged.

Ads for the performance of "Officer 666" in Guelph began with this photograph in the Mercury (5 March 1913): 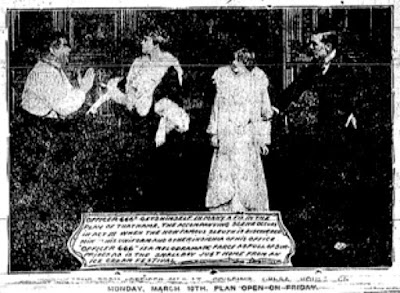 The caption reads: "'Officer 666' gets himself in many a fix in the play of that name. The accompanying scene occurs in Act III when the now famous sleuth is discovered minus his uniform and other insignia of his office. 'Officer 666' is a melodramatic farce as full of surprises as is the small boy just home from an ice cream festival."


An interesting simile! What could that refer to?


Advances in printing technology meant that newspapers were able to print halftone photographs in any issue; no doubt, an agent of the touring company sent the plates ahead to the local rags in advance of the show. By 1913, it was common for the Mercury to print such pictures to promote upcoming shows. However, "Officer 666" did seem to merit special treatment. A whole half-page ad, featuring another photo, was printed on March 6. Another photo appeared in the top middle of the front page on March 8.


Promotion for the play was not limited to the newspaper. The following postcard was also in circulation: 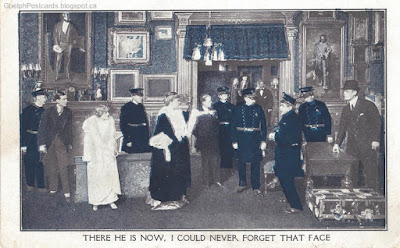 It was printed by the Dana T. Bennett Co. of New York and likely depicts the New York stage production. The message space on the back identifies the play and is also stamped with the local showtime, "Royal Opera House, Guelph. Monday, March 10." It seems that the play's promoters were going all out!

The Royal Opera House opened in 1894. It was built to supply a notable, cultural landmark for Guelph and to replace the inadequate old City Hall as a venue for dramatic and musical performances. (Sited next to the Grand Trunk Railway tracks, patrons at the City Hall had difficulty hearing performances over the throaty whistles of the G.T.R.'s steam engines.) However, with a capacity of over 1,200 seats, it was a rare night when the theatre was in the black.

It can be seen in the following postcard printed by the Pugh Mfg. Co. of Toronto: 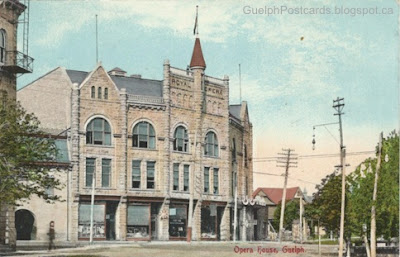 The building was razed in 1953 and today is the site of the less dramatic Guelph Community Health Centre, as can be seen in the Google Street View scene below.

In 1911, the Royal Opera House was sold to the Griffin Amusements Corporation, which brought it solidly into the orbit of the Broadway play touring system.


Finally, the big night arrived and bums filled the seats of the Griffin Theatre. It appears that the full-on advertising campaign worked. The review in the Mercury the next day was entitled, "Packed house greets a clever presentation at Griffin's last night." It praises the wittiness of the writing, the strength of the acting, and the frothiness of the plot:

The blue pencil might do a little effective work on one or two sentences, but otherwise the show is clean, funny, and has the requisite of all successful plays, nowadays, the thing couldn’t happen anywhere outside of the stage or a book.


In a nutshell, the plot concerns a youthful millionaire New York art aficionado named Travers Gladwin. He returns to his old haunt on Fifth Avenue after a trip to Europe to find that he is being impersonated by a slick thief who is in the process of purloining his art collection. The thief has also used his usurped identity to win the affections of Helen Burton, a lovely debutante. Rather than expose the deception, Gladwin impersonates a police officer—Officer 666—with the inducement of a $500 bill. With the help of his friend Whitney Barnes and valet Bataeto, Gladwin cleverly outmaneuvers the thief and wins the hand of the lovely Helen.

If you want to learn more, you can read the whole book at the Gutenberg Project. Or, listen to the audiobook at Youtube!


What I find curious is that the story reminds me of the end of the Odyssey: Odysseus finally returns to Ithaca to find suitors besieging his good wife Penelope. With the aid of his son and his old swineherd, he slays the suitors and wins back his bride. Happily for the cleaning crew at the Griffin Theatre, "Officer 666" ends without bloodshed and the actors instead "slay" the audience.


As was usual for these New York touring shows, the company put on only the one performance, departing the next morning for the next small town along the rails. In their wake, they no doubt left many Guelphites repeating their favorite lines, as well as some promotional postcards as testimony to the Royal City's small part in the gold age of theatrical tours in North America.

Admiration for "Officer 666" outlasted its turn on Broadway and along the American railways. It was adapted as a silent film in Australia in 1916 and in Hollywood in 1920. A still from the Australian version can be found at the Australian National Film and Sound Archive. There is also a short clip to see:

This appears to be how Gladwin gets the uniform of Officer 666 in the film.

Oddly, there also appears to be a tin wind-up toy of Officer 666 which you can see here:


It seems the character was still good for a laugh in the 1930s, long after its appearance in theaters.
Posted by Cameron Shelley at 18:30 No comments: