In previous posts, I have been revisiting some of the civic clocks that once looked out over the Royal City. Some were public clocks, such as those on the City Hall and on the old Post Office. Others were private property but nevertheless served as public timepieces, such as the Scotiabank clock. Another privately held clock prominently displayed in a public place was the Bell Organ and Piano Co. clock (the "Bell clock").

The company ("Bell Organ Company" to begin with) was founded by William and Robert Bell in 1864 and was taken over the next year by William. The business proved to be a great success and was moved from Wyndham St. to a larger facility in Market Square on Carden St. in 1871. By 1880, the company was billing itself as, "The largest and oldest organ factory in the British Empire"(Couling 1996, p. 13). The company decided to expand its factory into additional space on Market Square at the east end of Carden St. Besides more factory floor room, the company topped off their new structure with a clock tower. The new building and clock tower can be well seen in the postcard below. 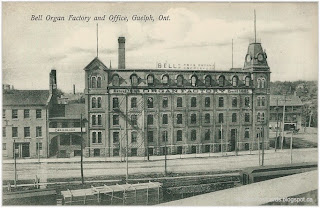 The card was published by A. B. Petrie & Son sometime around 1905. It shows the south face of the building, looking out over the rail yards.

Today, the lot is largely empty, as you can see from this Google Street View perspective (taken from a lower angle), making the old factory a kind of ghost building:

The clock was manufactured by the Seth Thomas Clock Co. of Thomaston Connecticut. It is described in glowing terms in the Mercury (29 Mar. 1882):


The clock stands 5 feet 8 inches high, and will have four illuminated dials of ground plate glass each measuring 4 feet 6 inches in diameter, the cost of which are $80 each. The pendulum weighs 130 pounds, and the hands are gilt, 2 feet 3 inches long. This is the first illuminated clock to our knowledge in the country.


The Seth Thomas catalog of 1911 lists a similar clock (No. 16) as an eight-day mechanism, suggesting that the Bell clock was wound once a week as well.

Here is a picture of No. 16 from the catalog. Somehow, it is not as I imagined. 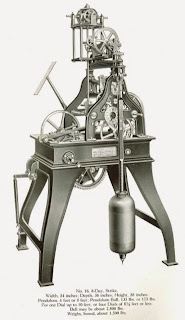 It is clear that the townsfolk were impressed with the new timepiece. Indeed, installation of the clock on 20 April 1882 is noted in the Centennial edition of the Mercury (1927) as a noteworthy event in Guelph history. Perhaps Bell put the clock there precisely to impress or to boast. Today, high rise structures are sometimes built partly to stroke the ego of the builder. (Pick any Trump Tower for an illustration.) Also, the clock would have to be especially good since it was on the same street as the City Hall clock tower. A photo of both buildings in the Public Library archives shows how well the two clocks were lined up. Perhaps to minimize the competition, the Bell clock is placed as far away from City Hall as possible.

However, a more specific purpose may also be present. Besides its distance from City Hall, the Bell clock also dominated the Grand Trunk Railway station which was at the east end of Carden St. in that era. The entry on William Bell in the Cyclopedia of Canadian Biography (1888, p. 140) makes the point quite plain:


Four large dials on the tower, which surmounts the central corner, announce the time of day to the neighborhood and to passengers on the Grand Trunk Railway, the station of which company is quite contiguous to the factory.


Anyone arriving in or departing from the Royal City by the G.T.R. would likely have taken note of the Bell clock.

In addition, this photo from the Civic Museum archive shows that the clock tower stood at the end of Neeve St. where it crossed the railway tracks at the time. It was a common practice among architects to situate prominent features at the end of cross streets in order to add to their effect. Consider the siting of the steeple of St. George's Anglican Church at the end of Douglas St. as seen from St. George's Square, for example. Anyone entering downtown from Neeve St. would have faced the tower surmounted by its boldly illuminated dials.

The clock endured a number of trials over its life. On 22 Dec. 1883, a fire occurred in the Bell factory that stopped the clock at exactly midnight (Mercury). Happily, it did not seem to have been badly damaged. In November 1909, the clock stopped due to cold weather brought on by a storm (Mercury, 23 Nov. 1909). It was not unusual for outdoor clocks to have difficulty in the cold. In 1911, the G.T.R. station was moved next to the City Hall and the Neeve St. crossing was cut off. Thus, the clock was deprived of part of its raison d'être.

It is hard to tell when the Bell clock was finally removed. The company reached its zenith of production by about 1888, at which point it was sold to a British syndicate and renamed the "Bell Piano and Organ Co., Ltd." (Johnson 1977, pp. 295-296). Production suffered due to economic recession and World War I and did not recover during the 1920s. The Company was sold to a syndicate of Brantford businessmen led by John Dowling in 1928 (Mercury, 11 Apr. 1928). The premises were extensively remodeled by Oct. 1929 (Globe & Mail, 4 Oct. 1929) but it is not clear whether or not this included the clock tower. The firm seems to have gone bankrupt by 1931 and its assets were sold to Lesage Piano of Sainte-Terese, Quebec in 1934. It may be that the clock was removed at this time, although records of the period are spotty. At any rate, it seems to have disappeared to parts unknown by the end of World War Two.

Like all civic clocks, the Bell clock was more than just a timepiece. It was an assertion of importance by the Bell Organ and Piano Company. It was an aesthetic statement by the designers of the building. Perhaps it was also a symbol of progress, its glowing dials signaling to Guelphites from on high that their time had come.

Posted by Cameron Shelley at 17:11 No comments:

The Pepco Edison Place Gallery in Washington D.C. is currently staging an exhibition entitled “Postcards from the Trenches: German and American Soldiers Visualize the Great War”. It features hand-painted postcards sent from the western front by a German soldier named Otto Schubert. The paintings are quite compelling.

Here is an example entitled "Horses under shrapnel fire".

The postcards can be viewed here.

(From the Design Observer.)

Posted by Cameron Shelley at 07:16 No comments: