Oran Turnbull and the first picture postcards of Guelph

The turn of the 20th Century was an exciting time in Canada for meany reasons. Telephones were becoming increasingly common. Electricity was starting to light up cities and drive their streetcar systems. Automobiles were beginning to appear on city streets. Advances in printing technology brought a new communication technology within the reach of consumers, the picture postcard, or "postal." Thanks to Oran Turnbull, the new craze come early to the Royal City.

By 1900, Guelphites began to find items like the following for sale in their fair city's bookstores and shops: 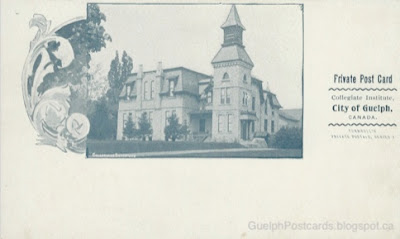 The card shows a picture of the Guelph Collegiate Institute, built in 1879 and demolished in 1959. Text to the right of the image notes that the card is "private," that is, produced by a private company and not a government agency. Also noted is the name of the product line, "Turnbull's Private Postals."

Here are some additional cards in Turnbull's series: 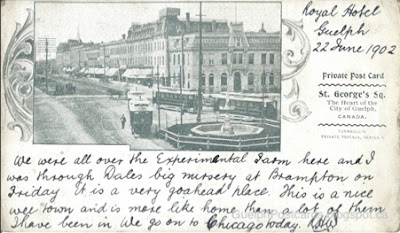 (From the John Keleher collection; courtesy of Bob Keleher.)

Here, the empty space around the image was put to good use. In the early days of picture postcards, the back was reserved entirely for the destination address, so messages were confined to the front.

Note also that the picture shows the old Post Office/Customs House, on the right margin of the image, before its third storey and clock tower were added in 1903. 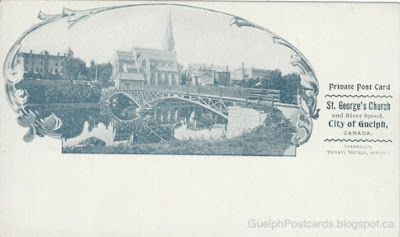 This image shows the original Heffernan Street footbridge, built in 1881 and replaced by the current one in 1914. 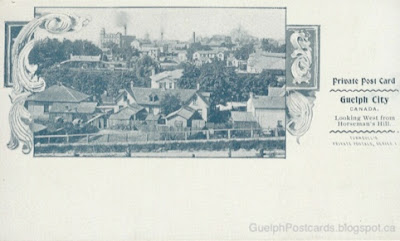 The final image shows a view of Guelph from Horseman's Hill (usually spelled Horsman, after an important local businessman of the 19th Century), from near the top of Grange Street.

The earliest, mass-produced picture postcards of Guelph were made by Oran Edgar Turnbull. Turnbull was born on 11 March 1870 in the vicinity of Peterborough. Sometime in the 1880s, he had moved to Brussels, Ontario and, perhaps, became interested in the printing trade, among other things. The 1891 Ontario Census shows Turnbull residing in Galt.

By 1894, he had changed his situation, as described in the Huron Expositor (15 Feb):


Oran Turnbull, an old Brusselite, now of Guelph, returned to Brussels on Tuesday, and on Wednesday evening, at 7.30 p.m., he claimed May, youngest daughter of Rev. J.L. Kerr, as his wife. Both the bride and groom are printers by trade, having learned in the same office, and it now turns out that they were learning more than printing. Anyway, it ended in the happy wedding of this week.


Rosetta May Kerr was the niece of W.H. Kerr, producer of the Brussels Post newspaper, where she and Oran may have learned the trade and gotten to know each other. In 1894, Oran Turnbull was working in the Mercury Job Room in Guelph. The Job Room was the part of the Mercury business dedicated to printing items for third parties, rather than the Mercury itself. For example, if a Guelphite wanted to print a pamphlet, then they could visit the Job Room and obtain a quote.

It seems that Turnbull had ambitions for himself. In 1899, he set up his own printing business, called "O.E. Turnbull, Printer and Binder." The company began to do work for various people in town, such as a program for the Canadian Wheelman's Association Provincial Bicycle Racing Meet held in at Petrie's Athletic Park in Guelph (Guelph Civic Museums 1986.17.1).

This program is interesting for a couple of reasons. First, it shows some images of Guelph that subsequently appear on Turnbull's postcards, e.g.,

This image is identical to that shown on Turnbull's postcard of the Guelph Collegiate Institute, shown above. It seems that Turnbull reused these images for several publications. There are a number of images of places in Guelph in the program that do not appear in any Turnbull postcards that I have yet seen, suggesting that there may be more out there still to be located. 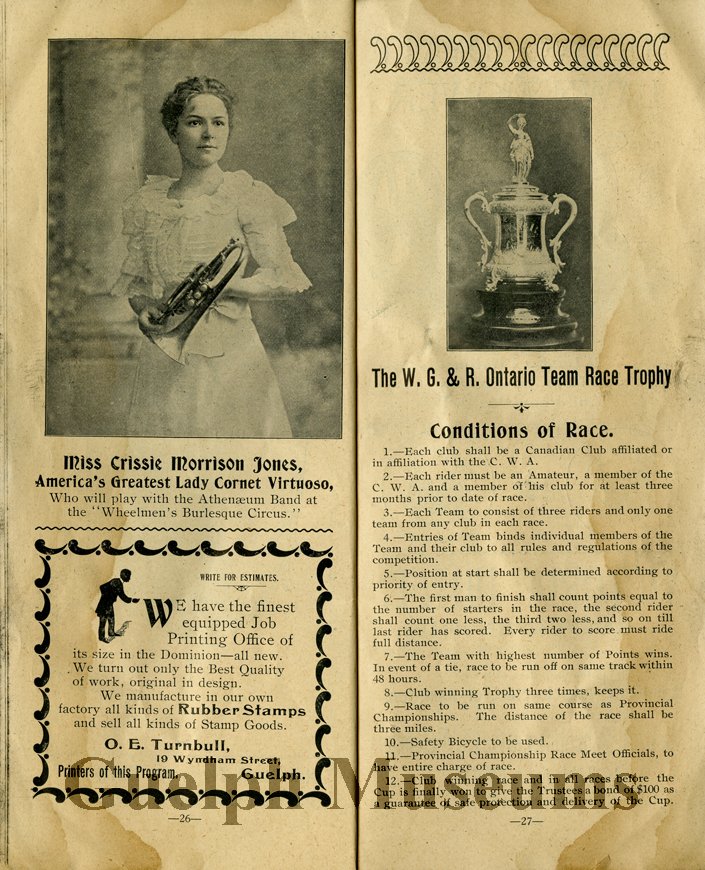 The ad gives the office address at 19 Wyndham Street, which puts it just north of the Petrie Building, and on an upper floor.

By far, the best advertisement for O.E. Turnbull is found in the “Farmers’ and Business Directory for the Counties of Halton, Waterloo and Wellington,” v. 12, 1899. The first page of the ad is as follows: 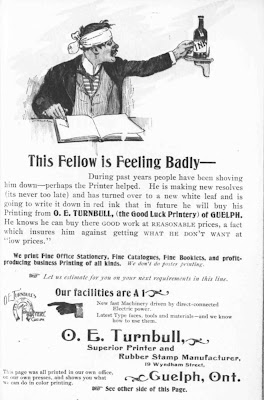 Behold the sorry state of the fellow who does not contract with O.E. Turnbull for his printing work. He is shown beaten up, not by Turnbull but by the competition! O.E. Turnbull and the Good Luck Printery to the rescue!

Also, Turnbull's business was not limited to printing but extended to customized rubber stamps, described as "The greatest labor-saver of the age" on the next page.

Turnbull also printed at least two books. One was "Concession Road" by Thomas Laidlaw, which provides misty recollections of early life in Guelph township. The other is "Short notes on veterinary anatomy for the use of students at the O.A.C. Guelph" a textbook by Professor Hugo Reed.

In 1901, Turnbull entered a partnership with A.W. Wright of Mount Forest to form Turnbull-Wright Co. Printers. The most noted product of this partnership was the production of "The Canadian Boy" magazine. This publication was aimed at the youth market, specializing in tales of manly adventure, the royal family, plus information on camping, photography, sports, and natural history.

Government records also show that Turnbull and Turnbull-Wright did business with the Ontario Agricultural College (OAC) just south of town. Ontario government records show that Turnbull did $24 of business with the OAC in 1899, in stationary, rubber stamps, and printing. The figures were $116.30 in 1900, $108.30 in 1901, $80.30 in 1902, and $18.63 in 1903. Some of that figure was with Turnbull-Wright in the latter two years. The 1902 accounts show that the OAC purchased $3.60 of postcards from Turnbull. Which ones were they, I wonder?

It is interesting to consider what factors got Turnbull into the picture postcard business at its inception in Canada. Partly, it may have been simple enthusiasm upon setting up his own printing business, wanting to feature the latest technologies and products.

Although I suspect timing had something to do with it, Turnbull may also have been inspired by his experience at the Epworth League Convention held in Toronto in 1897. The Epworth League was a youth association of the Methodist Church, set up in 1889. The Jubilee Souvenir of the Norfolk St. Methodist Church (Guelph Civic Museums 1985.82.121) of 1905 lists O.E. Turnbull as the League President for the Guelph Church in 1897 and 1899. As such, it seems likely that Turnbull attended the League convention in Toronto on 15–18 July 1897.

One of the features of the convention was the issue of a commemorative picture postcard: 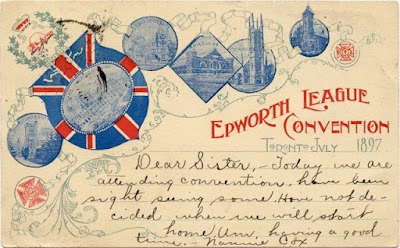 The postcard features a collection of small images of Toronto, above text supplied by the sender. As noted in my discussion of William Bell's trade cards, this sort of card was popularized by the World's Columbian Exposition in Chicago in 1893. The Epworth League Convention in Toronto was likely just following this trend. I suspect that Turnbull made note of these postcards and recalled their popular reception when he was setting up his new printing business in Guelph two years later.

A receipt issued in 1901 by the Turnbull-Wright Co. notes its two special distinctions: that it publishes The Canadian Boy magazine and that it publishes Turnbull's Illustrated Postals of the City of Guelph (Civic Museums 2002.27.90). 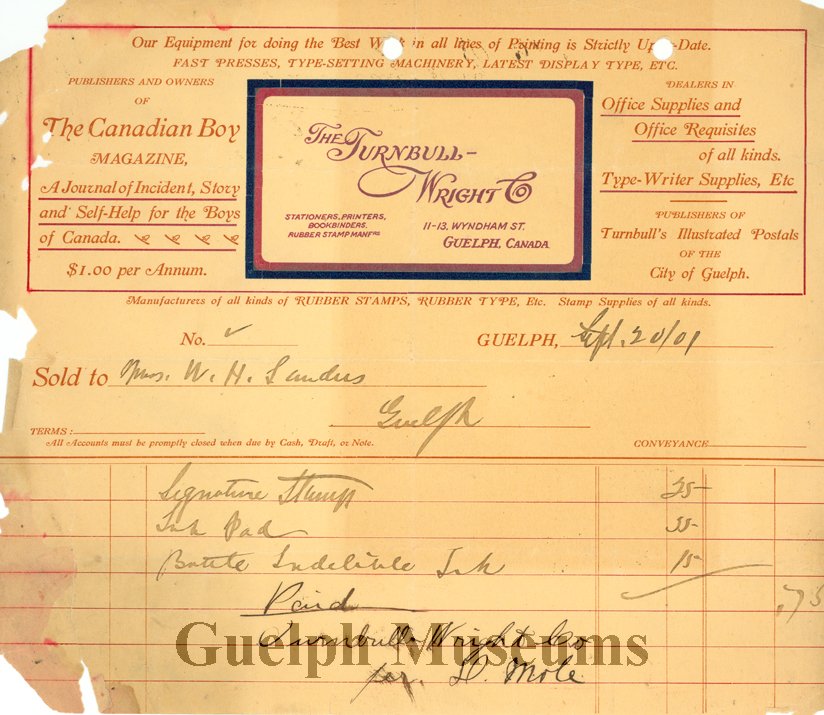 Altogether, it seems as though things were looking up for Oran Turnbull at the turn of the 20th Century. However, things had gone wrong in his personal life. Rosetta May and Oran had their first child on 5 May 1900, a daughter they named Elva Margaret. For reasons unknown, little Elva died two months later on 6 July (Brussels Post, 12 July 1900). I suspect that this event is centrally involved in the changes that Turnbull made in his life over the next couple of years.

In 1903, Turnbull sold out his business in Guelph and moved to Toronto, where the city directory lists him as a foreman in the press room at the T. Eaton Co., where he would have overseen the printing of catalogs and advertising. It also shows that he was rooming at Gerrard Street in Toronto, apparently by himself.

It is difficult to trace Rosetta May, although the 1911 Ontario census lists her as living with her mother in Brussels, her marital status given as "widow." I have been unable to locate a divorce record. It may be just missing or it could be that the couple simply separated in 1903. Rosetta May died in 1917, whereupon her obituary notes that she had spent several years taking care of her mother in Brussels prior the latter's death two years earlier (Brussels Post, 10 May 1917).

Turnbull moved on. In 1905, he moved to Michigan with Florence Simmons, who is listed as a clerk at the T. Eaton Co., suggesting they met there. They were married in Detroit on 1 January 1906, with the place of residence given as Grand Rapids. However, neither appears in any directory of that city.

Turnbull next turns up in the Detroit city directory in 1909 with his occupation listed as optician. He appears to have remained in that city for the rest of his life, changing occupation to optometrist in 1921. The Michigan Blue Book of optometrists & opticians for 1914 makes a note of his qualifications as an optician as "N.I.C. 1902." This appears to refer to the Northern Illinois College of Ophthalmology and Otology, in Chicago, which offered, among other things, correspondence courses for opticians. Here is an advertisement in The Canadian Druggist (April 1900):

It appears that Turnbull was looking around for a new occupation in 1902, saw the ad, and paid the $25 fee for the course.

Oran and Florence had two children, a daughter Wayne Louise in 1908 and a son William E.J. in 1911. Unfortunately, Florence died in 1927. Turnbull married Fannie G. Gordon in 1928 but the couple divorced two years later.

The only picture of Oran Turnbull that I have come across dates from this period. It is a government Record of Registry from 1931, which lists his official entry into the United States as 1911. 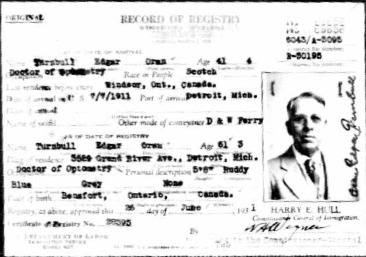 It would be interesting to know what he would have said about his experience as the one who introduced the picture postcard into Guelph so many years earlier.

Of special note is the fact that cover art and several illustrations for The Canadian Boy magazine were executed by David Milne, who went on to become one of Canada's foremost artists of his era, whose works were recently exhibited at the McMichael Gallery. 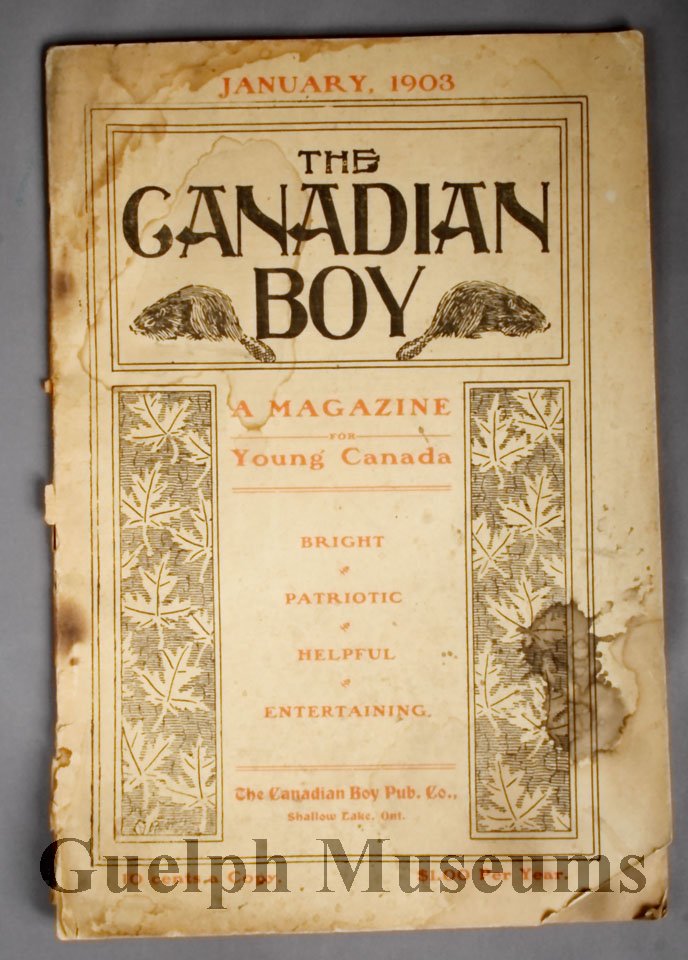 Milne drew the beavers and maple leaves for the cover, as well as two illustrations inside. Although the work is clearly juvenilia, it bears some resemblance to his later work and his noteworthy on that account.

Two letters from Turnbull to David Milne about his work for the magazine are located in the archives of the Art Gallery of Ontario.

Thanks to Roger Miller for help with background research for this post.
Posted by Cameron Shelley at 15:41 1 comment: