Here is an unusual Guelph postcard, that is, one without a picture. This is the front of the card with the address: 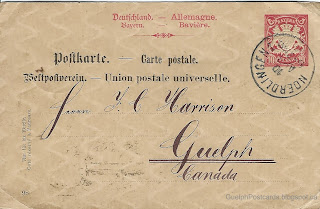 The markings identify the card, in both German and French, as a postcard ("Postkarte - Carte Postale") authorized by the Bavarian Post Office ("Weltpostverein - Union postale universelle"). Before picture postcards made by private companies become common (a story for another time), postcards were issued by governments, pre-stamped, and to be filled in with the address on the front and the message on the back. That is what we find here.

In this case, the address is simply "F. C. Harrison // Guelph // Canada". In those days, such an apparently vague address could get a piece of mail halfway across the world and into the right in-box. The postmark shows that the card was sent from Nördlingen, Bavaria on 10 April (1899).

Who is F. C. Harrison, and why is he receiving a postcard from northern Bavaria? The message provides some answers, if you can decipher it. 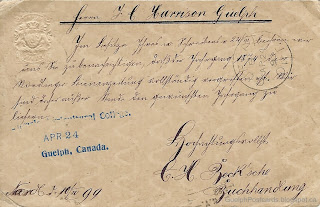 If you cannot make anything out of this writing, you are in good company. It is written in a script called Kurrent, which was a common hand in Germany until the end of World War II. Based on medieval script, it is significantly different than the Copperplate that has long been common in the English-speaking world (and is now prevalent in Germany). Indeed, the hand is now so strange that some people who can still read it hire themselves out to transcribe old manuscripts for modern German speakers who are trying to read their ancestors' Nachlass.

Happily, this message is not too arduous, so I believe that I have made it out. It reads:


I would translate it this way:


Mr. F. C. Harrison Guelph: In possession of your letter of the 24th, we are honoured to inform you that the 1874 volume of the Nördlinger Bee Journal is completely out of stock. We are therefore unable to send you the desired volume. Respectfully, C. H. Beck’sche, Bookstore.


The register is quite formal, which seems oddly out of place as most postcards in the collection are much more chatty in tone.

In any event, the message answers the question about why F. C. Harrison is being sent a postcard from northern Bavaria. Evidently, he requested a copy of the Nördlinger Bee Journal but was to be politely disappointed by the response.

However, we now face a new question: Why did F. C. Harrison want a 25-year old issue of the Nördlinger Bee Journal?

One clue is provided by the cancellation mark on the back side, which says, "Ontario Agricultural College // Apr 24 // Guelph, Canada." F. C. Harrison was apparently Francis Charles Harrison, then professor at the College. According to Ross & Crowley ("The College on the Hill", p. 58), Harrison had been hired as a professor of Bacteriology because the College needed someone with expertise in the area to carry out research on diseases that affect livestock, especially dairy cattle. In particular, Harrison was concerned with tuberculosis in dairy cattle and the potential for contamination of cheese. As part of this work, he circulated to local farmers doses of tuberculin, a treatment for tuberculosis recently invented by German scientist Robert Koch. The effort produced modest results but may speak to Harrison's familiarity with the German language.

It also seems that Harrison's interests were not limited to diseases of dairy cattle. In 1900, he published an article entitled "Foul brood of bees" in No. 112 of the Ontario Department of Agriculture Bulletin. In this article, Harrison discusses some of the diseases that can strike bee hives, such as bee dysentery. The article summarizes past research on the disease, characterizes its symptoms, causes, and evolution, discusses its economic impact, and reviews potential treatments.

The article cites several articles from the Bienen Zeitung, including one by Butlerow in 1874. In an obituary in 1886, the British Bee Journal & Bee-keepers Advisor (vol. 14) describes Butlerow as a Professor of Chemistry at the University of St. Petersburg, who wrote some significant works on bees and bee-keeping, and as a frequent contributor to the Bienen Zeitung, among other publications. To judge from the citation in his article, it seems that Harrison was looking for a copy of Butlerow's 1874 article and found it from another source.

Hired upon graduation from the O.A.C. in 1894, Harrison wrote many articles for the Agriculture Bulletin. In addition, he is known for his design of the OAC coat of arms in 1892, displayed in stained glass in the staircase of Massey Hall. In 1903, Harrison designed the OAC crest, which is shown below:

(Courtesy of the Ontario Agricultural College)

Harrison left the O.A.C. in 1907 for McGill University in Montreal. His career there is remembered in different ways. One report suggests that he could be high-handed:


The principal of the [MacDonald] College, F. C. Harrison, was described as having 'a somewhat arbitrary manner,' and as 'inclined to treat his colleagues rather as inferiors than as equals.'


However, McGill continues to offer the F. C. Harrison Fellowships to students who achieve academic excellence in the Department of Microbiology and Immunology. Perhaps we could say that he was a complicated person.

I have found no photographs of Harrison. However, a caricature of him is viewable here from the McGill archives (Photo # PR028137), dated to about 1935. The double entendre in the title is suggestive, but scurrilous caricatures have to be treated with caution as guides to their subjects.

He seems to have remained at McGill until the early 1930s, after which I have found no further report of him. It seems fair to say that he had a successful academic career.

The issue of bee diseases continues to be relevant today. The developed world is experiencing prolonged and profound die-offs of bee colonies, a phenomenon known as Colony Collapse Disorder. Since about one third of our crop production depends on bee pollination, the invalidity of so many bee hives is a growing concern. You can hear more about it from Marla Spivak in this TED talk:

The problems facing a healthy food system are, it seems, not entirely new. Also not new is the need to communicate about them. Today, much of this communication takes place over the Internet. In the late 19th Century, the humble post card played its part.

Posted by Cameron Shelley at 12:05 No comments: