The city of Guelph has a fair number of parks, each with different attractions and amenities.  One of those attractions is the Floral Clock, located in Riverside Park.  Have a look: 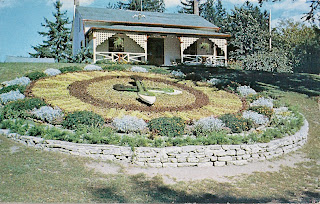 On the back, the image is credited to "L. F. Charter, R.R. 4, Picton, Ontario", while the printing process is described as "Spectrome color, Wilson, Dryden Ont.".  The label correctly identifies the image as that of "The Floral Clock, Riverside Park, Guelph, Ontario, Canada".

According to Paul Lavoie's "The Floral Clock in Riverside Park" (vol. 19, 1980), the floral clock is the work of John "Jock" Clark, who was the Park Administrator and servant of the City from 1948 until his death in 1973.  He was born at Crail Fife in Scotland on September 3, 1914, which would account for the nickname "Jock".

Besides his talents as a public servant, Jock was also a determined clock enthusiast.  The article notes that he had a hobby of collecting old clocks from various places while he was a young sailor.  Three years in the planning, the Floral Clock was installed in 1954.  The clock's face is 28' or about 8.5m across and requires the planting of about 6000 flowers and other plants, which are renewed each year.

The clock mechanism itself testifies to careful design.  The hands have (still?) an aluminum base balanced by a hidden steel plate and weigh 420 lbs (ca. 190 kg) when laden with 120 or so plants and soil.  The clock is set at a 27 degree angle, requiring the weight of the plants to be carefully balanced if the hands are to be able to turn through a full circle.  The challenges of running an accurate clock out-of-doors in all weather were also carefully considered (p. 74):

Jock's clocks were made to withstand climatic changes and Guelph's floral clock runs continually, summer and winter. The hands of the clock are run by a small one-quarter-horsepower motor. They are supported by a granite centre base to keep dirt off and the whole clock face is tile drained to prevent washout. To adjust the time, the motor is simply speeded up or slowed down accordingly.

To serve as an accurate timekeeper the clock has a reduction drive from an electric motor to the hands. This drive comprises a belt drive to a double reduction gear box, a worm wheel reducer from the gear box to a shaft which directly supports the minute hand and a first spur gear reduction train from the second shaft to a hollow shaft co-axial with the first shaft, the hollow shaft supporting the hour hand. The minute hand is twelve feet six inches in length and the hour hand is nine feet six inches.

Although it was inspired by a floral clock constructed in Edinburgh, Jock's design had the distinction of being much larger and was indeed patented (No. 64741) at the time.


Every spring, the clock face is re-planted to a special theme.  For example, in 1976, it was planted to honour the Montreal Olympics that took place that year.  In 1977, it commemorated the 150th anniversary of the City of Guelph.  The rim around the clock face often carries a slogan at the bottom and the current date at the top.  Neither feature is visible in the postcard above, but they can be observed in this Flickr photo by Victor Mazar: 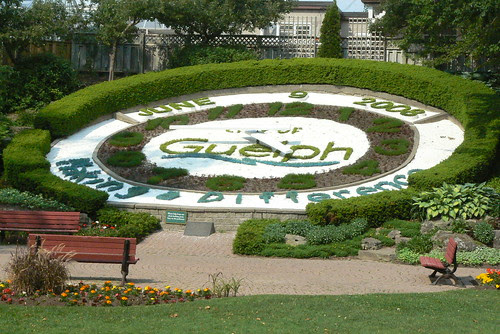 The slogan is, "Making a difference" and the date of the photo was "June 9, 2008".  The then-new City of Guelph logo is visible on the clock face.  Note that the clock has gone from Roman numerals (in the postcard) to Arabic ones.

Because of tree plantings, it can be a little difficult to see the clock from Woolwich St.  Here is the best Google Streetview image that is available at present:


The postcard has a smudged cancellation mark of June or July of 1964 and is addressed to "Miss Jaclyn O'Dell, 9 Dewey St., Sayville, N.Y., USA", Sayville being a small town on Long Island.  The message, scrawled in a broad hand, appears to read as follows:


Hi Sweethart,
hop this card find you in fine helth and good cheer as I am fine.  Wish you where here to help me out.
Uncle [?] Marshall

The "I am fine, wish you were here" expression is a standard sentiment for postcards later in the 20th century (and today), as explained in this British "Phrase finder":


'Wish you were here' has long been expressed in letters home by people on holiday. It is most often associated with postcards though. ...
The 'wish you were here' sentiment soon became a cliché and appeared on a high percentage of cards, often preceded by 'having a lovely time'. So much so that cards became available with the text pre-printed.

The text may be somewhat clichéd, but Marshall has added some personal touches, addressing his niece as "sweethart" and wishing for her help with some task that had apparently taken him to Guelph from New York.  I imagine that she was happy to have her uncle connect with her this way.

On April 23, 1827, John Galt and company founded the city by felling a maple tree near a bend in the Speed River.  On the next day, Robert Thompson relates how a clock, in the form of a sundial, was placed on the stump of that tree (p. 2):


The stump was afterwards fenced round, neatly leveled and dressed on the top, and a sun-dial placed on it, which answered as the town clock for several years.

So, I think that the floral clock is a very suitable centerpiece for a Guelph park as well as an appropriate monument to "Jock" Clark.
Posted by Cameron Shelley at 05:47