This postcard is an unusual one.  Normally, postcards are based on photos of outdoor, daytime scenes.  Except in small spaces, there were few practical ways of illuminating a large, outdoor space in order to take a photograph.  However, this postcard is clearly set after dark. 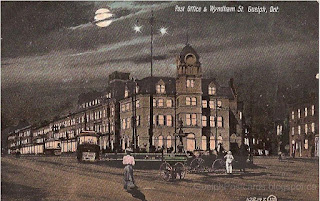 The postcard was published by Valentine & Sons' Publishing Company of Dundee, Scotland, and was printed in Great Britain.  There is no writing or post mark on the back.  The text in the upper right corner says "Post Office & Wyndham St., Guelph, Ont."  In the lower right corner is the text "102,147 (JV)", perhaps a serial number from the publisher.

Probably, you recognize this scene as St. George's Square, which was introduced in a previous posting.    Recall from that posting that the "Old Post Office" (as it was later known) had a clock installed in its tower in November, 1906.  Since the clock is missing in the picture above, it should be from before then. It also happens that the Old Post Office received its third floor in 1902 (Coulman 1977, n. 147).  So, the photo in the postcard appears to show St. George's Square as it was in about 1905.

Set at nighttime, the picture is of special interest for a number of reasons.  For one, it emphasizes the importance of street lighting to the city.  Note the tall pole in the middle of the image, standing beside the island, to the left of the "Blacksmith fountain".  At the top of the pole is a crossbar from which two lamps are hanging.  Those lamps seem to be radiating a cool, blue light into the warm, dark air above the Square.

In fact, those lamps are arc lights.  Each lamp consists of two small carbon rods separated by a gap.  Light is produced by passing a spark across the gap at high voltage.  Although it is hard to tell from this picture, the lights are suspended from the cross bar by block-and-tackle set that can be accessed near the base of the pole.  That is a good thing as the carbon burns out quickly and must be frequently replaced.  The City would have had some employees whose job it was to maintain the lights.  They would go from pole to pole on a schedule, hauling a cart carrying supplies.  At each post, the employee would loosen the rope from its cleat, lower the lamps, and assess the carbon rods in them, replacing them as required.

David Allan (1939, p. 64) notes that the arc light system first appeared in Guelph on January 11th of 1888, replacing the previous lighting system based on coal gas.  In her book "The history of the Board of Light and Heat Commissioners of the City of Guelph" (2001, p. 10), Elizabeth Thomson notes that the arc lights were themselves replaced in 1912 by a system based on incandescent bulbs.

Beyond these technological changes, the presence of night lighting had some profound effects on how people used the streets.  For example, it changed the night life of the city.  As Paul Moore (2004) explains, city streets were associated with poverty, prostitution, and other unsavoury things, at least after dark.  The advent of street lighting allowed the nighttime streets to be rehabilitated for respectable, middle-class activities such as shopping and movie-going.

Of course, the opening up of city night life did have some unintended and unwelcome (to some) consequences, as becomes clear in this November 30, 1912 Toronto Star article, entitled "Guelph Young People Must Keep off the Streets":


A meeting of the Police Commissioners was held Saturday to consider drafting a by-law to prohibit young people from promenading up and down the streets of the city and in the public parks at all hours of the evening until late at night unless they have with them a chaperon.
Mayor [George] Thorp, one member of the Commission, states that some stringent means must be taken to prevent promiscuous promenading in the city for hours at night, as conditions here during the past year have been shocking.

Why not just turn off the lights?

Thorp's dismay highlights the general anxiety over regulation of night life in the era of street lighting.  With "stringent" control, perhaps with the aid of police, street lights would permit city night life to take on a safe and respectable, middle-class character.

Also, I am intrigued by a comment that David Allan makes about the character of the light shed by the arc lighting of the streets, based on the fact that they are suspended from a pole (1939, p. 64):


The light swayed back and forth with the wind and produced deep, shifting shadows.

Imagine walking through St. George's Square or down one of other old city streets at night with the lamps swaying back and forth in the breeze!

Unfortunately, there is no evidence of this dramatic lighting in the postcard.  Although the moon appears to be casting shadows, the street lights do not.  In fact, this observation suggests that this postcard is not quite what it appears to be: Why is the moon casting shadows but not the street lighting?  The answer is that this postcard scene is taken from a daytime photo of the Square, not one taken at night!  Have a look at the following postcard: 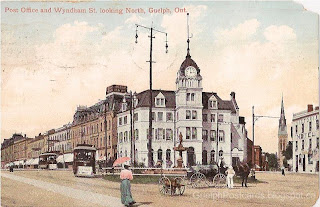 Look familiar?  In fact, this treatment of daylight images is not so unusual.  The trope involved taking a daylight image, darkening the sky and scenery, adding a moon wreathed in wispy clouds, then making other corrections, such as erasing a lady's parasol in this case.  Fiendishly, the colourizer has also erased the town clock, which is clearly visible in the daylight image.  In fact, this picture must date from after November 1906, when the clock in the Old Post Office was installed, but before the island in the middle of the Square was turned into an oval shape later in 1908.

Here is the scene today in Google Streetview:

View Larger Map
Although the central island is long gone, the street light at the corner of Quebec and Wyndham streets, near the center middle-ground, is near to the location of the old arc lamp pole.  How many of the City's youth have promiscuously promenaded beneath it, I wonder?
Posted by Cameron Shelley at 12:11