The end of the year is often a good time to look back and take stock, and so it is with postcards. Consider the rather watery postcard below, received in Guelph on 22 January 1917: 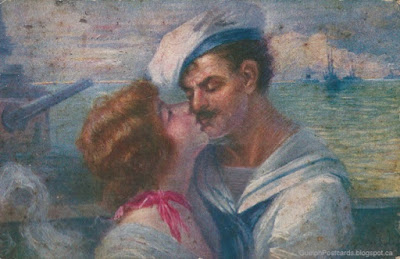 The naval theme of the picture is reinforced by the information on the back, which looks like this: 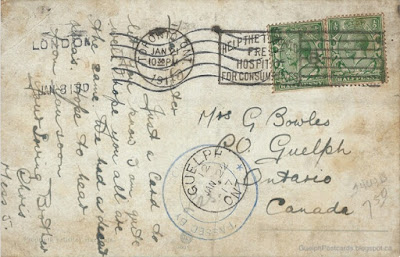 To start with, the "A.S.M" publisher's mark in the centre bottom shows that the card is Italian, published by A. Scrocchi of Milan. The postmarks reveal that this card passed through London (England) on 8 January 1917, Toronto on 21 January, and arrived in Guelph the next day. The large blue circle stamp near the bottom centre says, "Passed by censor," revealing tha the card had a military origin. Military personnel sent billions of pieces of mail home from the First World War, most of which had to be cleared by military authories to ensure that they contained no information that was of strategic significance or that would injure "morale."

A look at the message on the card confirms the judgement of the censor:

Dear Sister
Just a card to let you know I am quite well. I hope you are all the same. We had a decent Xmas. Hope to hear from you soon.
Your Loving Brother
Chris
Mess 5.

The addressee was Mrs. G. Bowles whose P.O. Box was in Guelph.

A little genealogical sleuthing reveals that the addressee was Mrs. George Bowles (née Lydia Wilkins), resident of Guelph Township. Lydia was born in Great Missenden, Buckinghamshire, England in November 1888. Her father John was a platelayer, that is, a man who maintained industrial rail lines. On 6 December 1909, she married George Bowles, in St Marylebone, Westminster.

George Bowles was born in Mile End, Essex, England, in 1889. On his marriage to Lydia, his occupation was listed as footman, that is, a domestic servant. However, it seems that a life of service did not appeal to the new couple, who immigrated to Canada in 1911, settling in Guelph.

The 1911 Census lists George and Lydia as residents of 46 Nottingham street and gives George's occupation as "driller" in the employ of the Standard Valve [and Fittings] Co. The city directory suggests that the couple soon relocated to a stone cottage at 64 Albert street, before moving to Guelph Township around 1915. That is likely where they lived when Lydia received this postcard from her brother Chris. (64 Albert Street; Courtesy of Google Street View.)

The writer, Christopher Wilkins, was born in Great Missenden in 1898. Like his older sister, he was not satisfied with his fortunes there—his occupation in the 1911 census is listed as "paper boy"—and so he enlisted in the Royal Navy in 1913. His first assignments were to training vessels such as the Ganges, where his trade is give as "Boy Tel[egrapher]."

Things got more serious in 1915 when Chris was assigned to the Queen, a pre-Dreadnought battleship that participated in the Dardanelles campaign, including the Gallipoli landings.

In August, 1915, Chris was promoted to Ordinary Telegrapher. The Queen was assigned to support the Italian navy, which explains why he was in Italy for Xmas 1916. He was promoted to Leading Telegrapher by the time he demobilized in March, 1920.

Christopher Wilkins wasted no time in seeking his fortunes abroad. He emigrated to Canada in May, 1920, headed to Toronto to join his brother Stanley, who had made the trip around 1914, intending to work as a telegraph operator. What become of him after that, I am not sure.

In Guelph, Xmas 1916 was a difficult one, as you would expect. On 5 December, the Mercury reported that seven Guelph soldiers had been reported killed in action. Privates Henry Emeny, Austin Henry Thomas, Robert S. O'Drowsky, William Macoll, Charles S. Lawrence, Frederick Willis, and Corporal George Thomas Ryder were reported either killed in action or dead as a result of wounds received in action. It was, said the headline, the "hardest blow the city has received since the outbreak of war."

An article from 9 December notes the availability of foodstuffs for Xmas cooking and compares that with the previous year. Regrettably, dates had gone up in price from 10¢/lb to 15¢/lb and gone down in quality. Something similar applied to currants, which were then imported from Australia rather than Greece, and were dearer but not as juicy. British lemon, orange, and citron peel had almost doubled in price and lard was almost impossible to get, likely because hog fat was considered a strategic good. On the up side, there had been a bumper crop of oranges, which were of good quality and cheaper than in 1915. No doubt, many young Guelphites received oranges in their Xmas stockings that year.

On 19 December came the news that George Sleeman was retiring from public life. He was well-known as a prominent, local business mogul and also for his keen interest in civic life. He was elected councillor for the South Ward in 1876 and was elected the first mayor of the City (no longer town) of Guelph in 1880. He was mayor of the city for six years in total, the last time in 1906. He was elected to the Light and Heat Commission and appointed to the Parks and Shades Commission, where he continued to serve until ill health motivated his present resignation. 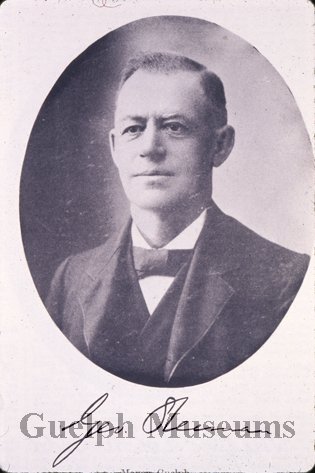 On the bright side, Santa Claus continued to move with the times. Advertisements in the Mercury show St. Nick making use of all the modern conveniences while going about his job. For example, Bell Telepone noted on 5 December that the jolly old elf highly recommends telephones, including a second telephone in order to save running upstairs to answer the first one! 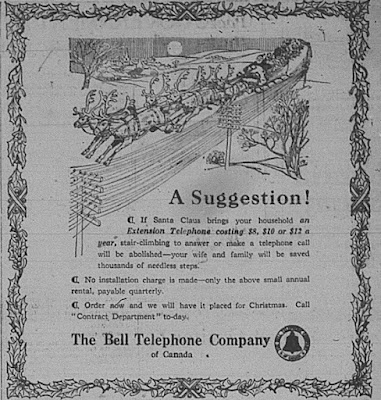 Another plus appears to be that Santa does not need a red-nosed reindeer, at least where the team can just follow the prolific telephone wires.

Another ad for G.B. Ryan & Co. from 7 December shows Santa ditching the reindeer altogether for another modern convenience, the automobile!

This is not to say that Santa had dispensed with all his magic. Early cars (and many late models) were notoriously hard to operate in the cold and snow, so that motorists tended to put them away in winter and operate sleighs instead in 1916. So, driving a car so readily over the snowy streets of the Royal City would have benefited from Santa's magic touch.

In addition, there continued to be a nostalgia for sleigh rides during the holiday season. On Xmas day, every cutter in the city was rented out so that Guelphites with some money to spare could promenade through town in proper style, with horses nodding and sleigh bells ringing (26 December).

One enterprising Guelphite took the obvious step of combining cars and sleighs. An article in the Mercury (30 December) notes:

An addition to a Ford car, which caused comment and interest yesterday afternoon, was the use of runners in place of the two font wheels. This facilitated the running of the car through the snow, and the driver was quite proud of himself.

Santa take note! I wonder if this innovative automobile looked like this: 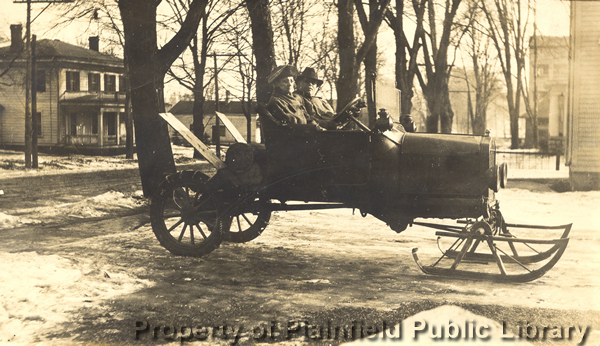 The same day came the news that the "Prison Farm" just outside of town might be re-purposed as a recuperation and training facility for returned soldiers. In due course, the Reformatory did indeed become the Speedwell Military Hospital.

George Bowles died on 3 March 1952 and was buried in Woodlawn Cemetery. His obituary dwelled mainly on his involvement with the local chapter of the Independent Order of Odd Fellows (IOOF), of which he was elected Chief Patriarch and District Deputy Grand Patriarch in 1932.

Lydia died on 13 February 1961 and was buried next to George.

Posted by Cameron Shelley at 14:01