Guelph gets in the swim: Swimming tanks invade the Royal City

The sound of the hammer is again heard within the walls of the gymnasium. In the basement a large swimming bath is being put in, while in the hall a very capacious stage is under construction.

Previously limited to outdoor splashing, the Royal City was getting its first taste of indoor swimming.

As noted previously, the history of (outdoor) swimming in Guelph went through some interesting changes in the pre-WWI era. Bathing started out as a purely informal activity undertaken at "swimming holes" abounding in the Royal City's creeks and rivers. This sort of bathing was practiced mainly by young men and often without the benefit of dress.

Attempts were made to render this sort of bathing "decent" by mandating the wearing of bathing costumes and encouraging the setup of commercial bathing houses, the most prominent of which was Hazelton's baths. However, success was achieved only with the construction of a family-oriented swimming hole in Riverside Park, which combined the 19th century swimming hole with the Edwardian amusement park where a genteel standard of decorum was expected and enforced.

At the same time, swimming in Guelph was influenced by another change in the wider world, namely the rise of swimming as a sport. Bathing was an activity indulged as a social pastime and a relief from summer heat but swimming was a form of locomotion in the water and, thus, could be performed competitively. In England, indoor pools first opened in 1828 with swimming races following a decade later. Interest in the sport followed English migrants to the new world

In 19th century Canada, universities and colleges were centers of innovation in sport. Football, hockey, and soccer were first pursued in a broad, organized fashion in the nation's institutions of higher learning, with interest spreading from there to the wider public (Morrow 2017). Much the same was true for swimming, though the sport did not achieve the same profile as football or hockey.

The idea of "physical education" did find its way as a subject taught during instructional hours, especially activities such as marching or drill that had military associations. Sports such as football, that were regarded as having a warlike side were sanctioned also, though as activities pursued outside of regular teaching.

Although it was not a warlike activity, swimming was accepted in a roughly similar vein. Competitive swimming and diving were vigorous endeavours that could bring glory to the victors and their institutions. Swimming was also endorsed by luminaries such as Egerton Ryerson, the superintendent of education in Ontario from 1844 through 1876. So, it is not surprising that the Report of the Provincial Farm Commission, that laid out paramaters for the new Ontario Agricultural College (OAC) in Guelph, included the following recommendation (Mercury, 9 March 1874):

That there should also be a building attached to the main edifice, containing a sufficient supply of baths for the use of the pupils, and, if possible, a swimming-bath.

It is also not surprising that this recommendation was not carried out. Although desireable, a swimming bath was not a high priority at the small, rural college.

Things began to look up for swimming at the OAC when the Gymnasium/Convocation Hall was built in 1891. Although it was still a multi-purpose building, the gymnasium showed the commitment of the mature OAC to physical education. Two years later, a "swimming tank" was incorporated in the Gymnasium's basement, a normal place for a swimming pool at the time. The building operations column of the Mercury provides the following description (2 November 1893):

A nice image of the gymnasium is provided in the postcard below, by an unmarked publisher: 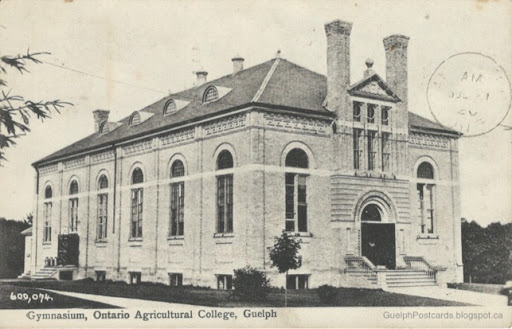 The postcard was sent in 1920, although the picture is from much earlier, to a Miss Helen Clifford of Ancaster from her friend, who was likely a student at the adjoining Macdonald Institute:

Box 19. O.A.C. Guelph // July 19, 1920. // Dear Miss Clifford :— Your letter received & I enjoyed it so much. Many thanks—but I would rather if you had not done that. We had some fine music & singing yesterday afternoon. Your sincere friend, May Muir

How odd to scold a friend for writing a letter! This response may be explained if Miss Clifford owed her friend a letter but had not sent one when the missive from Ancaster arrived. Perhaps feeling chastised, Miss Clifford has lashed out with this (mere) postcard of the Gymnasium in reply. After 100 years, it is hard to be certain.

In any event, the Gymnasium is a dignified building with large windows for good illumination (although the effect is diluted a little by the three milk cans holding open the side door). Windows along the ground level would have provided the main illumination for the swimming tank beneath.

There is little further mention of the swimming tank in the OAC Review for the next decade. In 1897, it is mentioned that the tank might be used as a water reservoir in case of fire, which, although practical, still seems like faint praise. It seems that use of the tank was casual, with certain professors perhaps taking classes there to lead occasional swimming and life-saving lessons as interest and their abilities allowed. This sort of use was not unusual for swimming pools in late Victorian Canada.

We are pleased to note the alterations and improvements being made in the basement of the gymnasium. The swimming bath is to be made fifteen feet longer, the lockers and other obstructions removed from the sides of the bath, and all the old wooden floor replaced by cement. These changes will give more room for swimming, and better access to the bath. They will also make the basement a bright clean place, instead of the dark dirty dungeon it was before. Greater interest in aquatic sport should result from this improvement, and next year we hope to see a large number of the boys joining in this excellent exercise.

[Unhappily, pictures of the swimming tank itself in the University of Guelph archives are not available at the moment.] 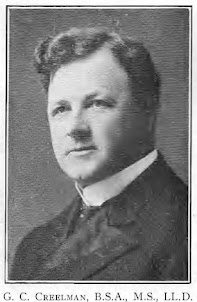 The improvements may have come at the behest of George Creelman, who became President of the OAC in that year. In 1906, President Creelman had Mr. Corsan, Varsity team swimming instructor at the University of Toronto, visit the College to give a lecture and practical demonstration of swimming and life-saving to interested students (OAC Review, v. 18, n. 4, pp. 188–189). One highlight was the life-saving demonstration, given in the lecture:

When the discourse turned on life-saving, it became necessary to have a subject on whom he could operate. For this purpose [he] chose Scotty Chisholm, and as events turned out, the choice was well made ; Chisholm’s struggles were so realistic that Mr. Corsan found him as hard to save as a drowning person.

Of course, the true highlight was the practical part:

After the lecture we adjourned to the basement, where Mr. Corsan proceeded to give us a practical demonstration in the water. He coached a few fellows, who took advantage of his very kind offer to help any of the students to improve their swimming. The final act was a race between Treherne and the instructor. The result was a dead heat.

Did Mr. Corsan hang back in order not to discourage Traherne? Who now can say?

After this point, mentions of swimming in the Review become regular, although not frequent. In May 1907, for example, a swimming, diving, and life-saving competition were included in a general, year-end athletic competition (v. 19, n. 8). The main event was swimming underwater for the longest distance—a modest beginning but a beginning nonetheless.

Finally, a Swimming Club was formed by students in 1909 (OAC Review, v. 21, n. 6, pp. 355–356). Its first event was held in February, whereupon Mr. Corsan returned to provide another demonstration and supervise the competition. Four teams of OAC students entered and competed in a variety of events. Reminiscent of contemporary picnic games, events included a 50- and 175-yard races—in addition to "walking the greasy pole" and "diving for plates," the latter two of which caused much amusement. Over 200 students witnessed the spectacle.

A select team of OAC students, Treherne, Ryan, Bell-Irving, Harries, and Cleverly, journeyed to Toronto to take on swimmers from the University of Toronto and McGill. Harries was the hero in the underwater swim and placed second in the "plunge for distance." Ryan placed third in the "swimming three styles" event. Although Varsity and McGill dominated the awards, as would be expected, the OAC team had made a promising start.

That fall, another OAC team had a friendly match against Varsity in which they improved their performance, although still losing overall to the more experienced team (OAC Review, v. 21. n. 7, pp. 406–408). This event consisted mainly of serious events such as a 100-yard race and "50 yards back swim," as well as diving. However, it did include a tub race.

For the first time, a picture of the OAC swim team is included: 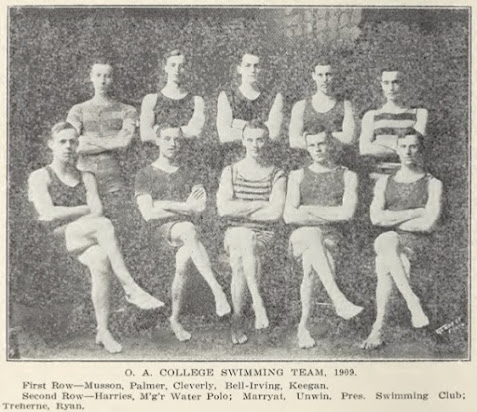 At last, swimming had truly arrived at the OAC.

To top the matter off, the same issue notes that the OAC held an intramural water polo tournament. Each year of students was invited to enter a team, with only the fourth year declining. The second-year team was dominant throughout and went undefeated 4–0, the third year team went an even 2–2, while the first-year squad finished 0–4.

The following year, the OAC Review notes that the College registered with the Canadian Amateur Swimming Association and the Ontario Water Polo League, so that its swimmers could enter official competitions (1910, v. 22, n. 7). In fact, the OAC Water Polo team carried off the Wainless Trophy in a tournament against the Toronto Swim Club, University of Toronto, and the Paris YMCA.

The swimming tank was finally successful in its invasion of the OAC. Competitive swimming in a regulation, indoor pool was firmly established at the College. Like other sports practiced on university campuses in the period, swimming in pools might be expected to attract attention in town. But, that is a story for another time.

The Gymnasium building was located where the MacKinnon Green is now, along the Winegard Walk. Construction of the new ImprovLab and theatre is taking place there, which will see the return of the site as a performance venue. Perhaps the shovels will uncover traces of Guelph's first swimming pool, ever hidden out of sight.
Posted by Cameron Shelley at 17:33