Bee-coming a college: Beekeeping and the Apiculture Building at the OAC

On 27 June 2018, Guelph officially became a "bee city". The distinction is applied by Bee City Canada to cities that make specific efforts to offer refuge to bees. Amongst items bestowed on the insects is a bee condo now placed on the green roof of the new City Hall.

This designation does not mean that the Royal City has no previous history with bees. Quite the contrary, they have always been an important part of the local fauna, although not always to the comfort of the citizens, as illustrated by this incident described in the Mercury (25 August 1932):

Excitement galore was provided for shoppers on the lower Wyndham Street section of the city yesterday afternoon, at about four o’clock, when a swarm of bees, escaped from a hive in the city, made matters rather interesting for well on toward an hour before the rampaging insects were finally subdued.
The swarm materialized literally out of a blue sky and was first noticed at the Wyndham-Macdonnell Street intersection at the south-east corner. The bees were apparently without their queen leader and appeared to be headed for nowhere in particular.


Citizens tried to wave the bees away with their hats but to no avail and were forced into retreat.


The bees then commenced to mill about in the centre of the street and as they kept buzzing around in circle, at about a height of four or five feet from the pavement, they caused no little consternation among motorists.

Some amusing sights were witnessed as automobiles drove along the street and headed into the bees, before the drivers realized the trouble ahead. Then, there was wild ducking, sudden swerves of the machines and made twisting of handles to close the windows. Traffic was more or less demoralized for a time.

Finally, the swarm settled on a hydrant on the south side of the street and the excitement quieted down. Some one sent for help from the Apiary Department of the O.A.C., and Dr. E. J. Drew came down to clear up the situation.

No queen bee was available to lure the insects back to their hive so it was finally necessary to put them to sleep and so ended about an hour of interesting amusement.


How fortunate for Guelphites that they had an apiarist they could call in for just such an emergency!

In fact, it was not just good fortune. The Ontario Agricultural College (OAC) just up the hill had been closely connected to bees since before its inception. Indeed, the OAC was the only school in Canada to have an entire building dedicated the bees, namely the Apiculture Building. This building can be seen in the postcard below, mailed in 1945: 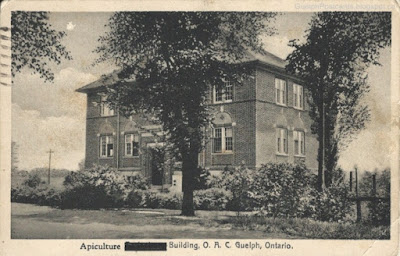 The postcard was produced by the F.H. Leslie company of Niagara Falls, and features a correction to the caption, which mistakenly read "Horticulture" when first printed.

The Apiculture Building was constructed in 1919–1920. In spite of its post-war date, I would say it belongs to the Edwardian Classical style of architecture, with a simplified, boxy shape, hipped roof, olde-tyme 6-over-9 windows, all decorated with a strong Flemish bond brick pattern, arches and keystones over the first-floor windows, and a projecting entranceway. I wonder if the arches over the windows, particularly on the front face, are meant to evoke beehives.


It is built of red brick, two storeys high with stone basement. The dimensions are 64 ft. 6 in. x 47 ft. 3 in. The basement will be specially insulated for wintering bees. Laboratories for practical and scientific work and class-rooms will occupy the two main floors. ... The sum of $40,000 was voted for its erection.


The new structure was apparently the first one in North America to be dedicated to the study of beekeeping (Stead 2002, p. 23). It certainly speaks to the importance that the OAC attached to the subject.

Still, the new structure did not impress the pants off of everybody. Morley Pettit, who had been head of the Apiculture Department at the OAC from 1908 until 1917, praised it as "fairly presentable" and noted the trouble he had experienced in trying to get an Apiculture Building for the campus on his watch (OAC Review 1921, v. 35. n. 4, pp. 125–126):


When the federal grant to agriculture first began to loosen the purse strings of the Ontario Department of Agriculture, I was naturally one of the first ones to ask for a building, having a rapidly growing department and no building at all. We were voted the magnificent sum of $8,000.00. When the most modest plans I could draw called for $16,000.00 the whole project fell flat, and the Apiculture Department had to struggle on until a little later it cost four times that amount to put up a building and then some.


However, Pettit did allow that the new building was much better than the basement of the Macdonald Institute, where the Apiculture Department was previously housed.

As noted above, the College's association with beekeeping went back to its foundation—even earlier, in fact. The notion of establishing an agricultural college in Canada had been kicking around for a number of years but received new impetus with Confederation in 1867. In 1868, John Carling, the the Commissioner of Agriculture in the Macdonald government of Ontario, called for a report about establishing such a college in Ontario ("The Agricultural College," Toronto Globe, 2 July 1904). The task of making the report was given to Reverend William F. Clarke, then the pastor of the Congregational Church of Guelph.

Rev. Clarke was an obvious choice to do the job. Born in Coventry, England in 1824, the son of a Congregationalist minister, he emigrated to Canada by 1837 and attended the Congregational College of British North America in Toronto (Cochrane 1893, p. 337). He was the pastor of the Guelph church from 1860–1872 and must have liked it since he later retired to the Royal City. 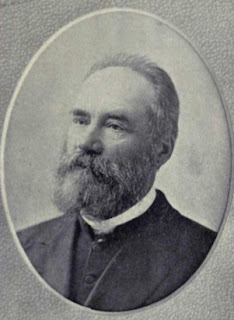 Moreover, he was very involved in regional agriculture. He founded and worked for several agricultural journals, including the Canada Farmer, Ontario Farmer, and the Rural Canadian. He was particularly interested in beekeeping: he was editor of The American Bee Journal of Chicago for two years and was a founder of the Guelph Central Bee-Keepers’ Association in 1886. That same year, he published the monograph "A Bird's-Eye View of Bee-Keeping."

To fulfill his errand, Rev. Clarke visited two state agricultural colleges, in Massachusetts and Michigan. His report was submitted in 1870 and recommended the establishment of an Agricultural College in Ontario, along similar lines to the American institutions with some local adjustments. A site in Mimico was selected initially, apparently for political reasons as conditions there were not suited the needs of an agriculture institute. As fortune would have it, a timely change in government brought about a change of heart and Frederick Stone's farm south of Guelph was purchased in 1873.

Rev. Clarke was appointed rector of the College while one Henry McCandless was hired from Cornell University in Ithaca, New York, as President. Classes began on 1 May 1874. However, McCandless proved inadequate to the task and a salacious scandal soon broke out. McCandless was accused of being an out-of-touch tyrant, unable to discipline unruly students and issuing foolish directives from his ivory tower office. For his part, McCandless complained of politically motivated staff appointments and impugned the honour of some of the female staff. He accused Rev. Clarke of flogging rhubarb roots to the College at an “exorbitant price” and of playing cards with the students. The details aside, the scandal caused Rev. Clarke to resign in protest. An investigation cleared Rev. Clarke and the staff of the College, whereupon McCandless left his position. Affairs were afterwards placed on a more even keel.

In any event, Rev. Clarke gave the College lectures in apiculture until 1895 (OAC Review; June 1928, v. 40. n. 10 p. 378). What these lectures were like is not clear, although a later account gives a cryptic hint as to the "many humorous incidents" associated with them (OAC Review; Nov. 1921, v. 34. n. 3 p. 90). Perhaps students were nervous about handling the insects. Perhaps Rev. Clarke demonstrated the notorious "beard of bees." Whatever the case, the lectures seem to have been memorable.

Subsequent apiculturalists developed the beekeeping program. In particular, Morley Pettit, quoted above, built the program and made a serious case for a dedicated building. Although he left before his intention was realized, it seems that the stature of apiculture and the presence of the Apiculture Building on campus owed much to his efforts.

As Sejpesteijn (1987, p. 118) points out, the Apiculture Building also helped to define a new space on the campus. Previously, campus buildings had been sited around what is now Johnston Green. Now, the Apiculture Building, the Field Husbandry Building (now Zavitz Hall) and the Raithby House began to define another common, open space to the south, now known as Branion Plaza.

The former location of the Apiculture Building can be ascertained by overlapping a campus map from ca. 1963 (the "Federated Colleges Visitors' Guide") with a satellite photo of Branion Plaza from Google Maps. See below. 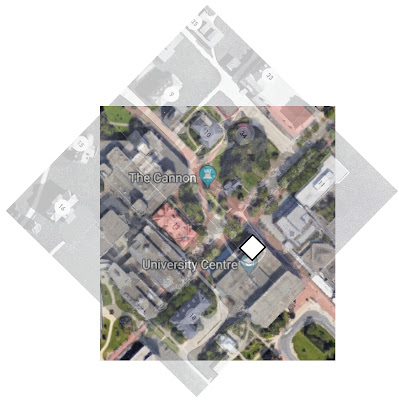 In this image, a semi-transparent detail from the campus map is superimposed on the colour satellite image. The maps were aligned by superimposing buildings common to both, including Zavitz Hall, the Hutt Building, the Bullring, and the Richards Building. The location of the Apiculture Building is picked out with a white diamond just right of the "University Centre" label. The comparison reveals that the Apiculture Building stood at the northern corner of what is now the entrance to the University Centre from Branion Plaza.

The little Apiculture Building was eventually doomed by progress. The formation of the University of Guelph in 1964 brought with it a push to enlarge and modernize the campus. With many new departments and colleges, it needed bigger facilities. In keeping with its new, university status, it was to look less rural and more urban and up-to-date.

As part of this development, the main entrance to the University was to be located away from the Gordon and College streets to a "mall" leading north from Stone Road (Mercury, 10 July 1972). This mall would cross the South Ring Road and end at an imposing University Centre, the fulcrum of the new institution. The Apiculture Building stood in the way and was demolished in June 1972. University President William Winegard regarded the demolition as unfortunate but necessary:


University President W.C. Winegard admits that of the 13 buildings originally selected for oblivion 10 years ago, loss of the Apiculture Building alone can be lamented. “It was a functional building serving a purpose, but to leave it would have changed our plans for the campus entrance off Stone Rd.” Dr. Winegard said.

Perhaps, if a swarm of bees every menaces the fire hydrants of Guelph again, instructors and staff could be called upon to save the day once more.

Posted by Cameron Shelley at 17:41