My previous posting left off with the demolition of the Priory in 1926. Salvageable logs from the main body had been hauled to Robert Stewart's Lumber Company on Cardigan Street and the side wings remained as an independent structure on George Sleeman's property on Waterloo Avenue. However, even this scattered state of affairs did not entirely end plans to reconstitute the Priory.

For example, the Public Works Committee recommended to the City Council of 1926 that they should recommend to the City Council of 1927 that a model of the Priory, 24 feet by 20 feet and built from the stored lumber, be constructed in Riverside Park, at an estimated cost of $2200 (Mercury, 21 Dec. 1926). This plan would enable the Priory to be present, in reduced form, for celebration of the Royal City's 100th anniversary in 1927.

Alas, though "considerable enthusiasm reigned" around this scheme, it came to nothing (Mercury, 14 June 1927). Perhaps, in the press of preparations for the city's centennial, the notion of building a miniature Priory from the remains the original structure were set aside. Indeed, one alderman went so far as to suggest that the old logs be sold off in order to save on storage costs. Although the councilmen had abandoned their rebuilding scheme, they were not yet prepared to part with the remaining lumber. The suggestion was turned down.

In the end, logs sitting in Stewart's shed did make their way to Riverside Park: They were dumped there in the 1930s to be used for firewood by Guelphites suffering in the Depression.

It appears, though, that not all of these logs were consigned to the flames. Ross Irwin noted that John Power made gavels from some of the salvaged wood. In the 1930s, he was head of Manual Training at Alexandra Public School, and a Mason. He presented a gavel made from Priory elm wood to each Master of Waverley Lodge No. 361 when they retired (4 Oct. 1954). It would be interesting to know if any of those gavels were still to be found!

Undoubtedly the oddest story connected with the logs of the Priory concerns the fate of the side wings taken by George Sleeman to his property in 1911. Connected end-to-end, the wings remained in place for decades after Sleeman's death in 1926.

The Sleeman family fortunes took a turn for the worse in the Depression (Mercury, 15 Jan. 2011), when they fell afoul of the law for alcohol smuggling. In 1957, the family estate was sold to Al Watson, who turned the residence into a hotel. The ground where the Priory wings sat was destined to become a parking lot, so Watson was looking to get rid of the extraneous logs (Mercury, 4 May 1956).

By a curious coincidence, there was a party on the prowl for just such a collection of lumber, the Ontario Pioneer Community Foundation (OPCF). (This story is related in detail in "Identifying the local past, the Waterloo Historical Society, part 2" by Mary Tivy, Waterloo Historical Society, v. 99, 2011, pp. 111–164.) In the years following World War II, there was a surge of interest in the province's pioneer era. Perhaps this interest was, in part, a reaction to the upheaval of the war. In any event, Ontarians became quite interested in the history of early settlement of their province.

In 1953, Kitchener radiologist Dr. A.E. Broome and the Waterloo Historical Society began a movement to put together a pioneer village in Waterloo County. A suitable site was identified at Doon, southwest of Kitchener. The OPCF campaigned for its proposal against other contenders, including a proposed village beside the Ontario Agricultural College in Guelph. In the end, the Doon site won out and the Ontario Pioneer Community Museum officially opened on 19 June 1957.

Despite the ceremony, the Museum was not yet open for visitors. In fact, it was still unclear exactly what buildings would be featured and why. In their initial rush of enthusiasm, the OPCF accepted any sufficiently old building from the region that seemed interesting and was not nailed down. As luck would have it, Al Watson in Guelph happened to have part of a very historic building that he would be happy to part with.


In an action that is reminiscent of the cloak and dagger activities of the old days, someone slipped into the city in the style of the commandos of World War II and carted off Guelph's number one historic relic—a portion of the old Priory.


The raiders in this case were the OPCF, led by their secretary, Dr. Andrew Taylor. Taylor had recently visited the structure on the Sleeman property and noted that it should be removed for the purpose of preservation. In the event that it could not stay in Guelph, he suggested that it would be perfect for Doon.

Professor D.B. Schutt of the Wellington County Historical Research Society had applied to Guelph City Council for funding to move the structure to Riverside Park (of course!) where it might be replicated in its entirety by combining new timber with the remaining old logs. Before the Council had publicly responded, Taylor's raiders had swooped in and moved the logs to the Doon site!

As McIlwraith later found out, the City Council had, a month earlier, declined to contribute to any reconstruction. The Council had written a letter to the local and Ontario Historical societies to say so but had not made any general announcement. Instead, Council had accepted Taylor's proposal to remove it, which Taylor promptly did. So, the 100 or so logs were removed to Doon much to the surprise of concerned Guelphites like McIlwraith (22 Feb. 1958; KW Record).

The removal was accepted with resignation among fans of the Priory. "Better Doon than dust," quipped William Cowan, who had been involved with the effort to save the Priory back in the 1920s.

The OPCF was thrilled with their acquisition. Louis Jones, an American museum curator consulting for the foundation, absurdly called it "Ontario's Ellis Island and Plymouth Rock all poured into one!" Taylor made grand plans for the Priory. Like Schutt, he proposed to stage a full-scale reconstruction of the Priory at Doon. The new Priory was to sit at the center of the pioneer village, with a cluster of streets leading away from it towards the other buildings like the "sun's rays."

Then, as rych mills aptly put it, "reality hit." The OPCF was told that a full-scale reproduction of the Priory would cost upwards of $40,000. With a total annual budget of $25,000, Taylor's dreams were clearly unaffordable. The project was shelved—forever. Its rescued logs were stacked in a secluded corner of the Doon site and quietly allowed to rot away. The long struggle to preserve Guelph's original house finally concluded in another county.

The tale reveals how much the Priory continued to exercise people's historical imaginations. Initially, it was seen as a kind of outsized curio, a noble survivor of Guelph's earliest days. Although this view clearly gripped Guelph boosters like George Sleeman, it gained too little hold on residents of the Royal City in general to motivate them to save it.

In the 1950s, the Priory fit into a new historical perspective in which it could serve as a stage for reenactment of pioneer life. Authentic structures would lend verisimilitude to ways of living that seemed increasingly quaint but strange to modern audiences. The old Priory did not even need to be in Guelph to perform this function.

Both efforts foundered on the reef of economy. The notion of preserving an old building for posterity was somewhat novel in Guelph's earlier days, so no provision was ever made to keep up the Priory. Instead, the building reached an advanced state of decrepitude before any action was taken. At that point, funding needed to accomplish grand plans for its revival exceeded what Guelphites were willing to pay.

The OPCF partially overcame this problem by involving the provincial government, an institution with deeper pockets. Unfortunately, the Priory proved still too expensive to revive when there were other buildings in much better condition available for the pioneer village at Doon. Had Wellington County succeeded in founding its own pioneer village, perhaps matters could have been different. However, it was just not in the cards.

Yet, the cards are not completely unkind. Old postcards of the Priory may be used to make a virtual reconstruction of the old building.

In the previous posting, I constructed a map to show where the Priory used to stand near John Galt Park. Below is a composite photograph combining an old postcard view of the building imposed on a photo I took from roughly the same vantage point (on the Downtown Trail just west of Macdonell Street) as the postcard. I used the map to figure out what part of the photo's background the Priory should overlap. As before, the result is rough-and-ready but suggestive, at least. 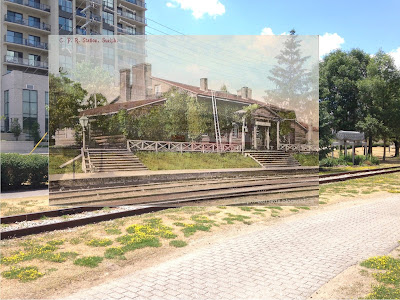 Thanks to rych mills for help with research for this post. See
his Flash from the Past column for a synopsis of this quirky tale.
Posted by Cameron Shelley at 17:35