As noted in my previous posting, Guelphites had planned for a big bash at the end of July, 1913. It seems that their wish was granted. Many visitors came by railway, which offered special fares, and by car. The Mercury on July 28 reported on the throngs disgorged into the city by the railways, bringing home the "old boys" and choking the length of Wyndham St. "with a seething mass of humanity."

The paper also compliments the city for its festive accoutrements:


The decorations were beautiful, and when the lights were turned on at 8.30 the vari-colored bulbs, flags, pennants and bunting presented a magnificent vista of color.


A special shout-out goes to the Mahoney's, who had a plumbing business on Quebec St., for their enormous Union Jack studded with coloured lights.

The evening was capped off with a concert from the Guelph Musical Society's Band and the Philharmonic Chorus at Exhibition Park. In addition, there were speeches from numerous important personages, which were entertaining even though perhaps inaudible:


The average speaker has not the sonorous vocal outfit to be a successful outdoor orator, and it may be amusing, although not exactly entertaining, to see the gestures, but hear no words. At any rate, the old boys and girls will now take it for granted that they are welcomed.

The program acquainted the public with the fun on tap:


During the entire week various kinds of attractions and amusements will be provided by the Committee, such as Side Shows, Animal Shows, Electrical Devices, Wax Works, Moving Pictures Shows, Ferris Wheels, Merry-go-Rounds and Galloping Horses, and everything in the amusement line that can be procured, and the Committee wish to assure the public that there will be nothing allowed that could offend the most fastidious.


In addition, there would be plenty of parades, sporting events, and musical performances.

Of course, it would not be a real party if it could not offend the most fastidious. In fact, the Mercury reports some licentious behaviour the very next day:


Many of those who attended the carnival five years ago [Old Home Week 1908] were wise in their generation, and knew what to expect. They wore their old duds. But of the others who did not know what was ahead of them—many of them had their best clothes ruined by talcum powder. The crowd ran riot, and girls and young ladies were openly seized and kissed on the street; hats were knocked off, and kicked about by the swirling crowd, and the air was full of talcum powder and confetti.


An editorial in the paper bemoaned this bacchanal on the Speed, urging police to put a stop to it, and assuring readers of "the chief offenders being the non-English speaking element." The Mercury on August 5 notes that an Italian, George Longo, pled guilty to a charge of "disorderly conduct" on Wyndham St. during Old Home Week. Was he the "non-English speaking element"?

Things seems to settle down by July 31, when the Mercury makes the following report:


There was no throwing of talcum or flour, and very little confetti showered about, the orders in that respect being well observed. "Ticklers" [paper tubes rolled into a coil that unroll and make a horn sound when blown into] were in evidence; and the vendors reaped a rich harvest, disposing of thousands of the "fun makers" as they called them.


However, the air was still thick with sexual tension:


The crowd was out for a big time, and they apparently had it, as the streets resounded with laughter, as arm in arm the boys and girls, young men and young women, promenaded the streets. Cordons were formed, and woe betide the girl that was caught in the charmed circle. Before she got out she was forced to pay toll.


This behaviour seems not to draw any reproach from the Mercury. Perhaps this suggests how the mores of Edwardian Guelph were different than the Victorian city.

Several issues of the Mercury from that week are missing, so it is hard to know which events drew the most notice. However, some items seem to stand out. First, there was a contest for best decoration, to be judged by the Committee. Many decorators, it seems, had incorporated electric lighting as an important component of their displays. The Committee seemed not to have anticipated this approach (July 31):


Thus, the Mahoney's, with their oversized and light-studded Union Jack, won only second prize. Today, decorating with lights is the norm, certainly for events such as Halloween and Christmas. In 1913, it seems, electrical decorations were still quite a novelty.

Another event worthy of note was the appearance on July 29 of Carlstrom, the "Swedish Bird Man" and his amazing Blériot aeroplane. This pilot was Victor Carlstrom, a Swedish-American aviator who was on a tour of southwestern Ontario at the time (Globe, July 25, 1913). Both he and his plane arrived in town by train. Carlstrom immediately set out to fly the plane at Exhibition Park. Unfortunately, the engine would not start and the Bird Man remained on the ground.

However, things worked out better on July 30. The Mercury of July 31 gives the following, breathless account:


With wings spread like a soaring eagle, Carlstrom, the bird man, sped over the city yesterday afternoon in his new Bleriot aeroplane. Rising from the ground at Exhibition Park, the daring aviator mounted to an elevation of a quarter of a mile, and swinging in a graceful circle, till he got his bearings, flew in a south-easterly direction.
The machine, propelled by a powerful seventy-five horse power engine, passed over Trafalgar Square, the people being made aware of the gasoline engine, which could be distinctly heard.
As the airship crossed the river and circled to the north, it was so high up that the airman at the wheel, who guided it in its evolutions, could not be seen. As it turned to the south, it dipped, and as it sped on a line, as the crow flies, on the return trip to Exhibition Park, it was much nearer to the house tops, and the aviator could be plainly seen guiding the machine.


It is not clear which Blériot model Carlson was flying, but it might have been the model XI that Blériot flew over the English Channel in 1909. 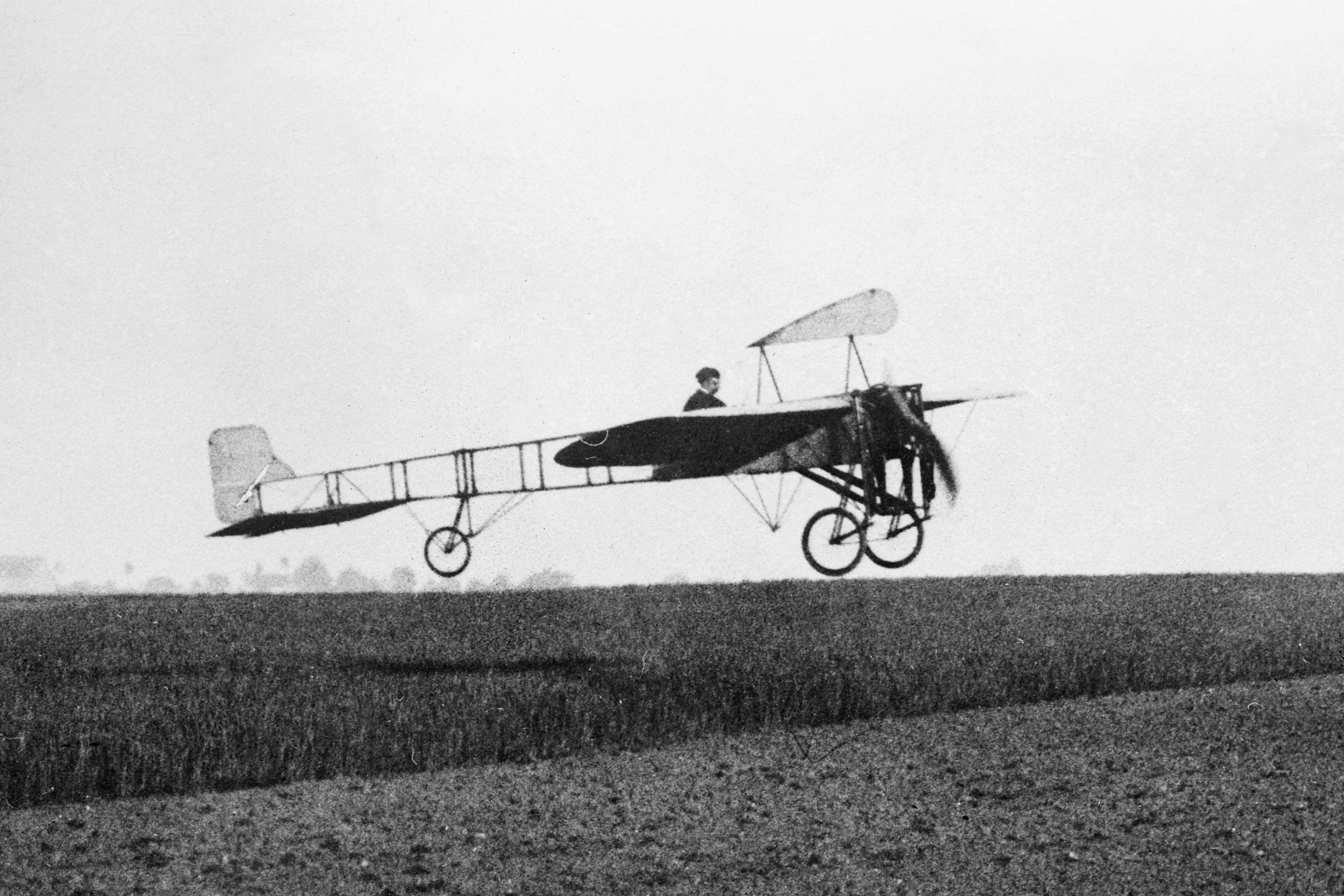 The program states that Carlstrom's flight was the first in the City and, probably, first in the experience of most of its citizens. It must have been thrilling.

Also on the new technology front was the Grand automobile parade from the City Hall to Exhibition Park. The parade was to include "all motor cars belonging to the city of Guelph and those visiting". Unfortunately, no account of the parade survives in the Mercury. However, the idea can be better appreciated if you imagine putting on today a parade of all cars belonging to the city and to every visitor. Clearly, the automobile was still something of a novelty in town.

A couple of incidents also illustrated the problems that cars would bring. On the first evening, a celebrant named Reg Hoile (sp?), an employee of the Herald, was dazzled by a sparkler in the face and stumbled from the sidewalk in front of G. B. Ryan's dry goods store on Wyndham. There he was struck by a passing car and suffered several cuts and a sprained ankle. The August 2 issue of the Mercury wraps up its coverage of Old Home Week by noting another auto accident (among other things). On this occasion, Walter Benjamin, "a colored man", was knocked down by the Wellington Hotel bus as he tried to cross the street in front of the Post Office.

Of course, cars did not cause all the injuries that week. A woman was knocked down by the horse-drawn ambulance, for example, on the opening night. However, these collisions suggest the coming tensions between motorists and other, established users of the roadways.

By the end of the week, the Old Boys and their reunion were winding down. An article in the Mercury (August 2) notes that the crowds were dwindling, as was their enthusiasm. Perhaps the last bit of excitement was a burst pipe (apparently the second) in Exhibition Park the previous day: "... although it made rather a pretty improvised fountain, it did no damage."

On the whole, the event was considered a great success. Postcards sent from attendees of Old Home Week echo the this evaluation. One postcard (featuring the Carnegie Library on the front), gave this report:


Dear Auntie. Received that piece yesterday. You ought to have come to Guelph. We had a great time there. It was awful noisy though. Thank you very much for sending that piece. While we were at Guelph we went all to see the college. Love to all, Georg


It was postmarked on July 31 and sent to Miss E. J. Matheson, then resident in Detroit.

It seems that Old Home Week in Guelph, 1913, had it all: Noise, lights, cars, planes, talcum powder, and stolen kisses. Although the residents may have been looking forward to another one soon, the next Old Home Week would not occur until the city's centenary in 1927.

Posted by Cameron Shelley at 11:40