One Guelph postcard that puzzled me when I picked it up is the following, purporting to be of McAlisters Falls, Guelph, Ont. Guelph is well known for being sited along the Speed and Eramosa rivers but it is not noted for any waterfalls, unlike, say, Niagara Falls or Hamilton, which bills itself the "city of waterfalls." 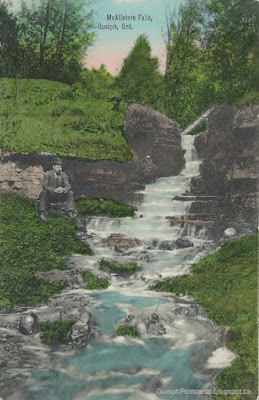 I have never found another reference to this site, so it seemed as though the card might be an in-joke on the part of the publisher, Mr. A.B. Petrie. Indeed, the card was mailed in 1909 to a Mrs. M. MacAllister of Ameronto, Ontario, from someone who did not sign his name but said that, "you will notice me on the other side of this card." The spelling of M(a)cAl(l)ister is different but niceties of spelling were not always top of mind with people dashing off postcard messages for the next mail pickup.

More light was shed on the mysterious Mr. McAlister when I saw the following (Courtesy of the John Kelleher collection): 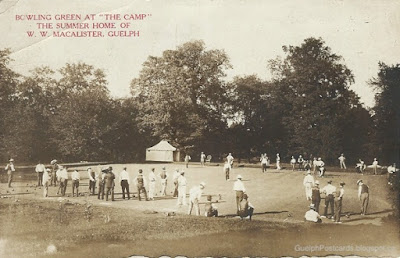 The name is spelled differently but Mr. W.W. MacAlister is much easier to place. William Wilson Macalister (1855–1930) was born in Kingston, Ontario, and moved to the Guelph area young enough to have been educated at the Rockwood Academy (Mercury, 11 April 1930). He lived and worked in Guelph his whole life, being a bookkeeper and later business manager in the Mercury office for 25 years. His obituary adds that, "Curling and bowling were his favorite pastimes, and he was a charter member of the Royal City Curling Club, and the Guelph Lawn Bowling Club."

Macalister's love of lawn bowling would explain the postcard of the bowling green with his name on it.

The location of "The Camp" were Macalister had his summer home was Victoria Park, a private park along the south shore of the Eramosa River on what is now the east end of the Cutten Club, abutting Victoria road. The Park was set up by the local Boating Club as a destination for pleasure seekers from Guelph and its environs. People could rent a boat and supplies in town and paddle or row up the Eramosa to the Park, where they could enjoy walks, swings, picnics, music, light shows, and lawn bowling.

It was also possible to camp there. Serious campers could take tents, furniture, cooking utensils, etc. and stay the whole summer. During the week, residents of the "camp town" could paddle into town for work and paddle back for dinner. For locals in the late Victorian era who wanted to camp but had not the time, money, or inclination to rough it in the Muskokas, pitching a tent in Victoria Park was a welcome alternative.

William Macalister was such a man. He and his family spent every summer camping in the park for many years. He was so closely associated with the facility that his comings and goings were sometimes mentioned in the paper, e.g., (Daily Mercury, 7 September 1892):


Mr. W.W. Macalister has pulled up stakes after camping for six weeks at Victoria Park, and has moved his family back into town.


No doubt, it didn't hurt that he was a long-time member of the Mercury staff.

Mr. Macalister so adored Victoria Park that he purchased the property. The following notice afterwards appeared in the Daily Mercury (10 July 1894):

Any person found trespassing on the property as described below, will be prosecuted. That place known as the Macdonald Farm, south of the river and the back part of the same farm, now owned by W.W. Macalister, between the Brock Road and the Victoria Park, also on the roadway to last mentioned property from the York Road.
Note—The only public entrance to Victoria Park is by the river and the York Road by Victoria Bridge.


The Macdonalds were the farmers who owned the property and from whom the Boating Club rented the land on which Victoria Park stood. People from town sometimes reached the park by walking across the Macdonald's property on the south bank of the Eramosa. The notice in the paper was intended to dissuade people from accessing the property in this way. Access was supposed to be by the dock on the Eramosa river or the path from the nearby Victoria road bridge.

This point brings us back to McAlister's Falls. Between the bank of the Eramosa and the camping grounds of Victoria Park is a shale bluff. Boaters landing at the dock had to climb up steps cut into the bluff in order to reach the campground and its attractions. Flowing in the other direction is a creek that rises in what is now the University of Guelph Arboretum. This creek cuts cross the Cutten Field golf course, tumbles down the bluff and into the Eramosa river just opposite the City Waterworks.

Could the site where this creek drops over the bluff be McAlister's Falls? Here is a photo of the site I took in 2020. 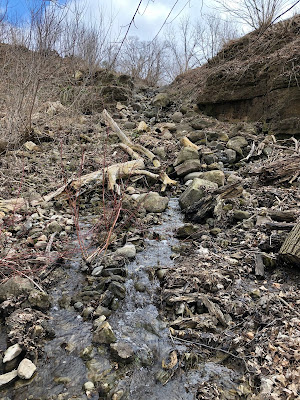 This "falls" is filled with rocks and fallen tree limbs, whereas the postcard falls is clear and more presentable. However, the scale and rough layout of both falls are similar and a little imagination suggests that, if the modern site were cleaned up, the two might resemble each other closely.

So, it appears that, although William Macalister was buried in Woodlawn Cemetery, his marker may really be this little waterfall next to the campground that he loved so much. 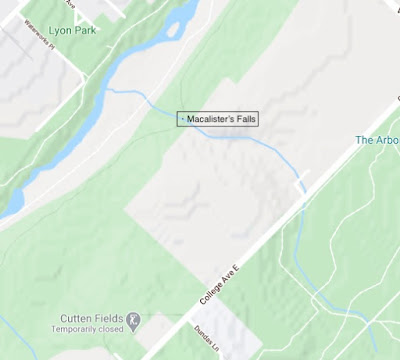 (The location of Macalister's Falls, along the south bank of the Eramosa in Guelph.)
Posted by Cameron Shelley at 15:05