Marjorie Armour sent this postcard to her brother J.C. in Allan's Mills, Ontario on Easter Sunday of 1913. In it, she assigns her sibling a bit of holiday work:


Suppose you are having great time in your holidays. Would you get a flat box with earth in it ready for us to plant our slips in when we go home as we intent to take our little plants home.


The postcard is a promotional, generic type known as a "banner card" for the obvious reason that it has a banner in which the name of the promoted town is printed—Guelph, in this case. 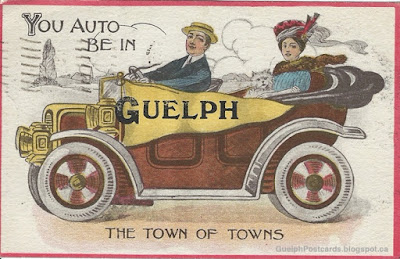 The card was printed by the Samson Brothers, prolific printers of generic postcards from New York City.

The card is interesting here because it depicts an automobile and because it was sent in 1913. By all accounts, that year was the one in which car ownership took off in the Royal City. Up until that point, automobiles were regarded primarily as amusements for the well-to-do, good only for larks in the countryside during the summer months when roads were dry and (mostly) passable. Afterwards, cars came to be regarded as a reasonable means for personal mobility, perferable to streetcars and horses.

The parade of automobiles during the Old Home Week of 1913 perhaps helped to push this transition in Guelphites' thinking. Indeed, automobiles can be seen lurking in postcard views of the occasion, such as the three below. 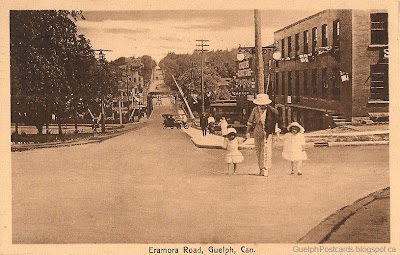 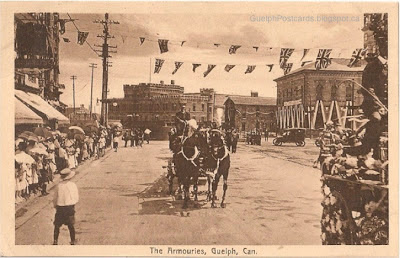 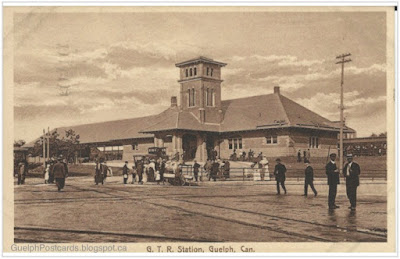 There is a nice photo of Russell Daly, a newsseller and tobaccanist in St. George's Square, with his new Studebaker in 1913. 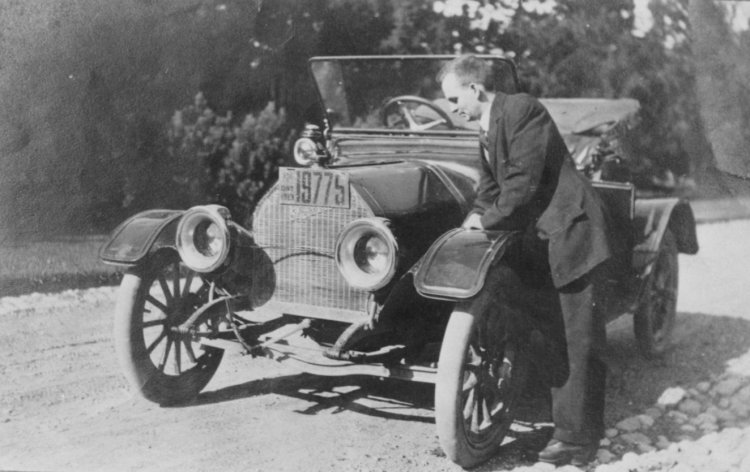 Earlier photos of automobiles in Guelph are more difficult to come by. A picture of Carden street during the Old Home Week of 1908 shows a car involved in the proceedings in front of the old City Hall. 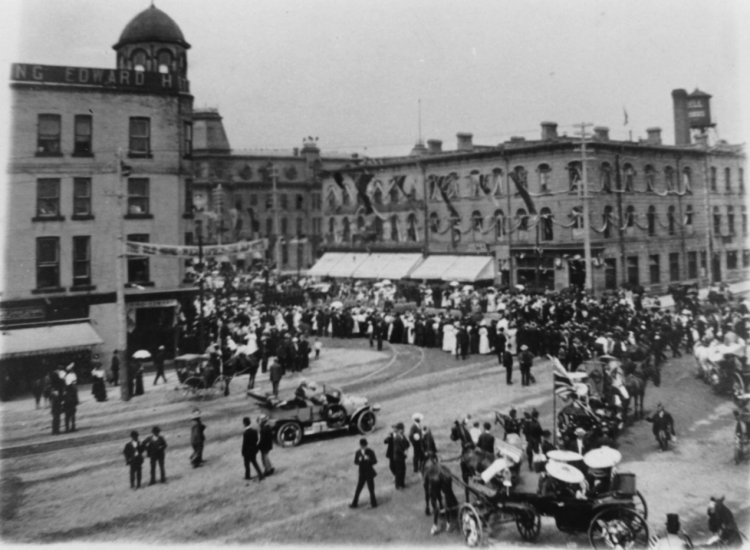 Going further back, there are a few contenders for the earliest car owned by a Royal City resident. Provincial automobile registration records for 1903 (when registration was first required) identify the following Guelphites as car owners:

George Williams's claim is supported by the photograph below of a woman in what may be a driving cap seated behind the wheel of a car. 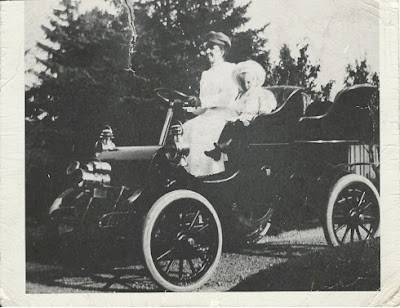 (Courtesy of the J.W. Kelleher collection.)

The back of the photo has the following annotation:


The car does appear to be a Cadillac Model A, sporting head- and side-lamps, although it is clearly a four-seater and not a runabout and was first available in 1903. The Evening Mercury (28 Apr 1923) says that George Williams and George Walker got a car between them, so it may well be that Mrs. Walker drove the car too. Mrs. Walker's given name was Ida, so the name on the annotation may represent a slight confusion. (The Walkers had a 10-year-old daughter named Agnes, often known as Ada, which may explain this issue.)

John McHardy's claim to the distinction of first car-owner of Guelph is backed up in the Evening Mercury (20 Jun 1921). It says that, in 1901, Mr. McHardy, a former alderman and co-owner of a pork-packing business, had a garage built especially to house his new toy. The Autocar was the first shaft-driven automobile, had a two-cylinder motor, and was steered by a crank handle on the left-hand side of the car. (Courtesy of the American Museum of National History.)

However, the Evening Mercury (28 Apr 1923) identifies Major Louis Wideman as the first car owner of Guelph. Wideman was a prolific builder responsible for many structures still standing in the Royal City, as well as an officer in the local militia. The car was described as a "one cylinder affair, of the crude touring body type then in vogue" while the registration records describe it as a Conrad four-seater. Altogether, it sounds as though the car may have been a Conrad Touring Car. The Conrad Motor Carriage Company, of Buffalo, originally produced steam-powered cars but began producing gas-powered ones in 1903, including the Touring Car. 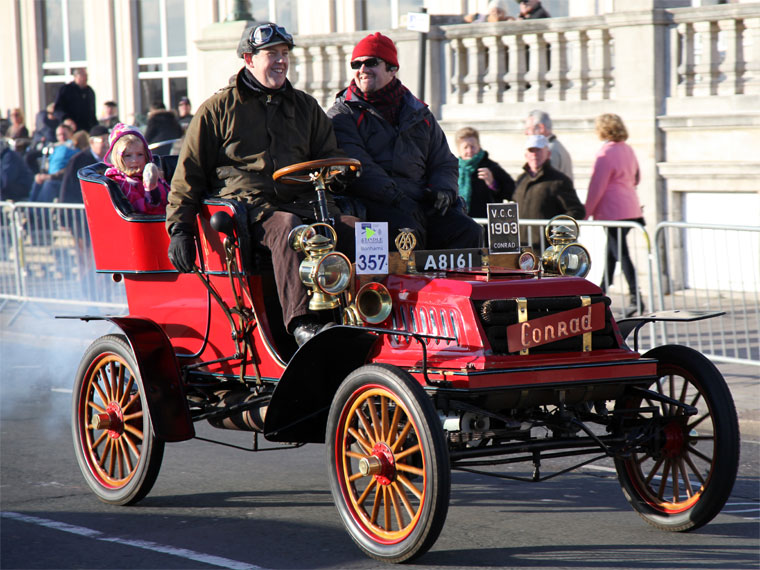 Of John McHardy, the 1923 articles describes him as, "another early motorist, and from the first an enthusiast." The paper goes on to repeat an interesting story about his early experiences, with the proviso that it may be apocryphal:


Whether true or not, it is said that on one occasion, while driving along the Brock Road (Gordon street), he was about to overtake a wagon, in which there were a man and his wife. The team stopped and the woman climbed down from the high seat and ran to the side of the road. Mr. McHardy pulled up his car and one of the party got out and went ahead to hold the horses. The farmer was not at all alarmed about them though, and jocularly remarked, “I think I can hold the horses if you will hold my wife.”


The 1921 article relates another story about the attitude of local farmers to McHardy's vehicle, though of a different tenor:


Mr. McHardy informed the Mercury today that at the time he purchased his first car, the farmers in the vicinity of Guelph were so anxious to see the wonderful invention, that they often ‘phoned to him from miles around wanting to know in which direction he was traveling with his bus on the following Sunday.


Perhaps McHardy was exaggerating or did not fully comprehend why local farmers were concerned about his travel plans. In any event, it is unclear how literally we should take his claim to be absolutely the first car owner of Guelph.

Clearly, though, early automobile ownership was not easy or straightforward. For example, the 1923 article relates a tale about J.W. Lyon, another early car enthusiast, and his encounter with a farmer who did not look kindly upon his contraption:


On one occasion when he was on his way home with a party late at night they got lost. The country roads were not then known so well to drivers as they are now. They stopped at a farmer’s house to ask directions, but the farmer obstinately refused to give these, and they had to get the necessary information elsewhere.


As this anecdote suggests, many Ontarians, rural or urban, viewed automobiles as playthings of a wealthy elite, whose only effect on them was to run them down or frighten horses unnecessarily during heedless jaunts down country lanes.

Early news about horseless carriages could be unpleasant. On 8 Aug 1902, the Mercury carried the news that Mrs. Annie Merlihan, a long-time Guelphite who had relocated to Chicago, had been killed rescuing her daughter Genevieve from being run down by an automobile (Globe, 9 Aug 1902). After pulling her daughter out of the vehicle's path, she was herself run down and her skull crushed under the hooves of a horse that the car had just frightened. The occupants of the car did not stop, perhaps unaware of the carnage in their wake.

Complaints about dangers from automobile use became a regular feature in the Mercury, such as the following letter to the Editor (14 Nov 1904):


Dear Sir—As I was driving home from church to-day, Sunday, the 12th inst., I very near had a serious runaway accident by an automobile driven by some citizen of Guelph. In all justice and Christianity they should have waited until people attending church could get home. There should be a law prohibiting the horrid and dangerous nuisance from the public highways. An elderly lady in Guelph had her arm broken by the same nuisance causing her horse to run away.


There were occasional attempts to sabotage automobile travel in the township, as when a log was thrown across the road at night in Eramosa, apparently with the intention of causing a wreck (Evening Mercury, 13 Sep 1912).

Of course, the situation changed as more people drove cars and government efforts to pave the roadways made travel by automobile easier and more reliable. As noted above, registration of automobiles surged around 1913. In 1922, the Guelph Motor Club was formed, which lobbied for road signage, paving, and construction of intercity highways. As the automotive age began, Guelphites took a last look back at the time when horseless carriages were an oddity whose future was far from certain.

For more information on the early history of automobiles in Guelph and Ontario, see:

Posted by Cameron Shelley at 13:48 No comments: