Guelph has had many prominent civic clocks, including the Bell Organ and Piano clock, the Scotiabank clock, the old Post Office clock, the City Hall clock, and the Floral clock. However, Guelph's longest-lasting civic clock is perhaps its most humble one: the clock of St. George's Anglican Church.

Since this clock has a subtle visual presence, it makes sense to start by pointing it out. Here it is in a Google Street View image:

The dial is visible just above the lancet window on the second storey of the tower. It may not be evident from this image, but the dial measures 6 feet or 1.82 m across. This view already suggests one reason why the clock does not pop out: It has a dial but no face. The gold arms and markings of the dial and hands also do not contrast sharply with the limestone wall of the Church. It seems that the clock was designed to blend in with the building rather than to stand out against it.

Postcard photographers certainly did not go out of their way to feature the clock. It is barely visible at a sharp angle in this postcard published by Progress Printing, Preston, Ontario around 1970: 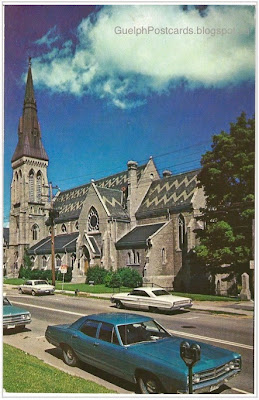 In spite of its subtlety, the church clock is the most time-honoured timepiece in Guelph. It was a gift to the church by the famous Arthur William Cutten. Cutten was the second of nine children born to Walter Cutten and Annie MacFadden (13 Apr 1870), a family of devout Anglicans. Arthur grew up in Guelph, attended church, and went to high school at Guelph Collegiate. However, rural Guelph could not satisfy this young man's ambition, so he lit out to Chicago in 1888, where he was employed as a bookkeeper. To make a long story short, Cutten used his modest income to speculate successfully on commodities and became a very wealthy man. However, in spite of his yen for the big city, he never forgot his little home town.

In the 1920s, Cutten lavished money on the old burg in general and St. George's Church in particular:


In Guelph he donated $20,000 to pay off the Guelph YMCA mortgage; he donated funds to St. George’s Church for stained glass windows, marble floors, a bell, an organ, and a carillon (the chimes alone were estimated to have cost over $25,000); to Woodlawn Memorial Park he donated funds for more land, iron fencing, entrance gates and other property improvements ($13,000) and was instrumental in creating the Cemetery Commission and establishing the Perpetual Care (Maintenance) Fund. As well, he provided financial support for all his siblings.


His best-known project was the Cutten Fields golf course, still a central feature of the Royal City.

The clock was given to the Church in connection with the carillon, which included a set of 23 bells (now 36) mounted in the Church belfry and played from a touch-sensitive keyboard. St. George's carillon was only the fourth in Canada and was thus quite a bragging point for its parishioners. Both clock and carillon were made in Croydon, England by Gillett and Johnston (Mercury, 18 March 1926), makers of the carillon in the Peace Tower and a firm that continues in operation to the present day. The paper also remarks that the largest bell in the set weighed in at 1,745 lbs. (about 790 kg), so the device was clearly designed to produce a big sound.

The clock uses some of the bells of the carillon and rings every quarter hour from 7:15 am to 11:00 pm. In fact, the clock plays the "Westminster quarters", patiently described in the Mercury for the uninitiated:


At a quarter past the hour four notes will ring out; at the half hour, eight notes, the first four and four others to blend in pleasing melody; at the three-quarters, twelve notes; and at the hour sixteen, followed by the strokes, indicative of the hour.


In case that is not clear, here is a small clock sounding the Westminster quarters:

St. George's clock rings out the hours 24/7. It was initially powered by a system of weights that had to be raised up the tower twice a week by pulling on furnace chains—no small task! In the 1950s, this system was replaced with an electric one. Don Hamilton, the carillonneur of St. George's since 1987, notes that the original clock mechanism continues to serve well: It keeps time to within a few seconds a day and can be adjusted by changing a system of weights attached to its 4 1/2 foot pendulum.

I was fortunate enough to be given a tour of the clock and carillon by Mr. Hamilton. A steep and narrow stairway of 59 steps leads from the base of the tower up to the clock level. There, the clock sits mounted in front of the big lancet window facing onto the street. The clock can be seen striking the half hour in the video below:

Note the pendulum swinging in front of the window, the flywheel spinning in the background during the chimes, and mechanism on the right that pulls the chords connected to the bell clappers.

Up another narrow flight of stairs is the room with the carillon keyboard. This keyboard features a set of "batons", sticks that are arranged somewhat like piano keys and played by using fists to depress them. Acoustics can be controlled by varying the force used on the batons and by using a set of foot pedals beneath. The carillon of 36 bells at St. George's provides three octaves, enriched by the harmonies set up among the bells themselves.

Those bells can be glimpsed through a hatchway into the belfry on top of the keyboard room: One question remains: Why did Arthur Cutten donate the clock and carillon to St. George's Church? Mr. Hamilton notes that the church previously had a set of chimes in the belfry, which were not nearly as loud or sophisticated in comparison to a carillon. So, the clock and carillon would improve the church's acoustical profile and increase the pride of the parishioners in their edifice. In addition, not far away, the Catholic Church of Our Lady was having two magnificent towers added to its facade in 1926, considerably increasing its civic profile. St. George's Church was not in a position to compete architecturally but the clock and carillon may have provided a different way to keep up with the Joneses. Or, it may have been a coincidence.

Whatever the reason, the clock of St. George's Church remains the Royal City's most enduring civic timepiece. Posted by Cameron Shelley at 06:37 No comments: