The east end of Macdonnell Street features in this soberly but summery tinted post-war postcard, printed by the Valentine-Black Co. Ltd. of Toronto. Though the buildings are coloured brown and gray, many signs, marquees, and other details are picked out in warm tones. In the centre, the staircase in front of the Church of Our Lady has been rendered as a verdant lawn. Also, the photo was taken with a telephoto lens to make the Church look larger than it would normally from the other end of Macdonnell. 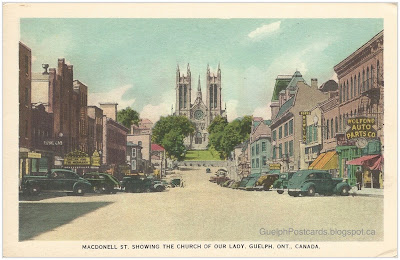 In fact, this is one of the few postcards of Guelph in which the picture can be dated with some precision. On the left-hand side, the marquee for the Royal Theatre can be seen. (The Guelph Civic Museums has a closer photo of the marquee in 1938 and an aerial shot of the building from 1951.) It reads, "TARZAN AND THE MERMAIDS." This flick was released by RKO Radio Pictures on 15 May 1948 and showed at the Royal starting 28 July, remaining for a week. So, the photo shows the eastern stretch of Macdonnell at the height of summer, 1948.

Note that the caption uses the spelling "Macdonell", which was not officially "corrected" by the City until recently.

For comparison, have a look at the Google Streetview image taken from roughly the same vantage point.

In spite of some obvious changes, the streetscape remains remains quite recognizable.

In the near foreground, on the right-hand side, signs can be seen for the Wolfond Auto Parts Co., Spegel's Department Store, the Royal Bowling Alley, and the (new) Western Hotel. In between lie Frank & Schuett's Hardware store, the Dominion House Furnishing Co., and Guelph's A&P grocery store.

The Wolfond family immigrated to Canada from Russia in the wake of the Revolution and the pograms that followed (Mercury, 7 Mar 1978). Joseph joined his father Henry in Guelph in the early 1920s. The family began in the scrap metal business but soon branched into auto parts and property development with the Wolfond Construction Company. As noted in an earlier post, Wolfond had purchased the Ulmenwald estate on Water street from Thomas Bedford and donated some of the property to the John McCrae Memorial Garden, which opened in 1946.

Under the Wolfond sign, note the small clock, which appears to read 4:05. This little timepiece joins the likes of the St. George's Anglican church, the Bell Organ and Piano Co., the Scotia Bank, the old Post Office/Customs House, and the City Hall as public clocks in Guelph's downtown district, though it is the most modest of the lot. When Wolfond was later designing the Scotia Bank building, was he thinking of his old Auto Parts store when he incorporated a clock into it?

Opposite these places can be seen signs for Royal Cab, the Royal Theatre, the Zenith Restaurant, and Mullin Bros Electrical Appliances. Tucked in between are Walter's Credit Jewelers, Groat's Supply Store, the Guelph Daily Mercury building, and the D.E. Macdonald & Bros general store.

The Royal Theatre was built by Joseph Wolfond in 1933–34, with William Mahoney and Aaron Austin of Guelph as the architects. The Royal opened its doors on 19 Sep 1934, showing "A star is born" with Janet Gaynor (Kelley 1970).

The film "Tarzan and the Mermaids" was the twelfth and last Tarzan movie to star Johnny Weissmuller. The distinguishing feature of this episode in the Tarzan saga is that it is highly aquatic. The reviewer's headline in the Toronto Star (28 June 1948) is, "Weissmuller swims plenty in Imperial Tarzan film". Filmed at Acapulco, Mexico, the story has Tarzan saving a tribe featuring winsome pearl divers (the "mermaids") from the machinations of a devious white trader Varga who has set up a cult of "Balu" with himself impersonating the god. In particular, Tarzan saves the beautiful Mara from a "marriage" to the false idol. In so doing, he fights underwater battles against Varga's thugs and a big, bad-tempered octopus.

If you would really like to see Tarzan "swing into action," then you can watch the whole thing here. (Go ahead; I will wait.)

Tarzan sums it up thus: "Balu—man, not god; High priest—evil!" The film was likely intended not as a subtle critique of organized religion but as a bit of light relief from summertime heat. I am not sure but it may be that the Royal Theatre was air conditioned, often a big attraction in summertime in an era when home and auto A/C were still uncommon. Besides, watching Tarzan repeatedly dive into the drink may have made sweltering Guelphites feel better, if only for an hour.

Joe Wolfond soon outgrew his auto parts business. By 1953, the old store had been converted to the headquarters of Wolfond Construction. The Royal Theatre had another decade in it. It was closed suddenly on 26 July 1958.

Please share comments and reminiscences about the businesses mentioned here in the area below!

See my article in the Mercury Tribune for further information.
Posted by Cameron Shelley at 14:29 No comments: