Here is a postcard that provides an image of a residential street in Guelph, namely Park Avenue.  The card is postmarked for August 1st, 1914. 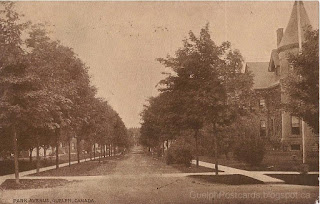 This postcard was printed in Canada for C. Anderson and Co., Guelph by Warwick Bro's & Rutter of Toronto.  Printing in the lower left-hand side identifies the scene as Park Avenue in Guelph.  Vernon's City Directory of Guelph in 1917 (p. 70) lists C. Anderson and Co. as  "booksellers, stationers, china and fancy goods" at phone number 256, located at 53 Wyndham St. (now the location of the Quebec St. mall in St. George's Square), the perfect sort of place to find postcards.  Warwick Bro's & Rutter were a Toronto-based company that printed over 7,000 different postcards during the "Golden Age of Postcards" in 1901-1913.  So, this card is in some good company.

The photograph looks down Park Avenue from London Rd. W. towards Suffolk St. W.  The photographer was probably standing on the edge of Exhibition Park, for which I assume Park Avenue is named.  One thing that impresses me about the picture is the tree canopy: Each side of Park Ave. is lined with a regular row of trees, probably maples.  Now, have a look at a similar angle from Google Streetview:

The street remains remarkably similar, with many of the same trees probably in both pictures!

Also in evidence is the same house on the right side of Park Ave.  That is "Parkview", the immodest home of George B. Ryan, the prosperous owner of G. B. Ryan & Co. a "dry goods, millinery, clothing and furnishings" store on Wyndham St.  Parkview is listed in the Canadian Register of Historic Places, so I will defer to their description:

Parkview was designed by architect, G.M. Miller. Miller also designed the famous Massey Hall, at the University of Guelph. Parkview was built from 1894 to 1895 for G.B. Ryan. Ryan was a prosperous Wyndham Street clothing merchant. This building is one of Guelph's most palatial homes and remains a valuable contribution to the heritage buildings in Guelph.
Designed in the Baronial phase of the Queen Anne style, Parkview is a fine example of the skilled craftsmanship and ornate detailing of mason T. Matthews. Parkview features masses of heavy masonry, typical of Scottish Baronial architecture, specifically surrounding the porch entrance. Characteristic of the Queen Anne style, Parkview exhibits tremendous variety and complexity of detail, with complex wall surface patterns and various roof pitches, including a tower. Parkview is among the most outstanding examples of this late Victorian style in Ontario. It was built of pressed red-brick on a red sandstone foundation, with masonry details of sandstone and a roof of grey slate. The exterior features a circular three-storey tower, including a conical roof, as well as decorative gables and porches.

Clearly, the dry goods and clothing business in Guelph was very good!

The Guelph Civic Museum has pictures of Parkview from ca. 1907 and from 1978.

Just on the left edge of the frame is another house of note, this one designated by Heritage Guelph, that is, "London House".  It is now the site of the London House Bed and Breakfast, from which we can obtain this description:

The house was built in 1893 for John G. Sully ... John G. Sully, a carpenter, later became General Manager and half-owner of the Raymond Sewing Machine Company. Sully also served as a director of the Guelph Opera House, and alderman for St. David’s Ward, Chairman of the parks Committee and head of the Fire and Light Department.

Like Parkview, London House is an example of the then-popular Queen Anne style, although with its decoration mostly in scroll-cut and painted wood instead of Baronial stonework.  One wonders what John Scully thought of George Ryan's monster home being built right across the street only one year after the construction of his own dream home.

In any event, if you want stay in a historic house in Guelph, this may well be your best choice!  (As another distinction, some of the scenes for the TV movie "Me and Luke" were shot in front of this house.)

The presence of Parkview and London House testify to the fact that Park Ave. is perhaps the smartest address in the Exhibition Park neighbourhood.  It is curious, then, that the postcard does not clearly capture either residence.  The street itself is what the photographer evidently thought most worth recording.  We can only speculate as to why that is.  Perhaps the straightness of the road and the regularity of its tree planting provided a worthy example of the taming of nature in civilization.

In addition to the picture on the front, this card has a message recorded on the back:

The card was addressed to "Mr. A. G. Dingman, R.R. #3, Shedden, Ont."  Shedden is a small town just southwest of St. Thomas, and is the "Rhubarb capital of Ontario" according to its Wikipedia entry.  Apparently, it was also once a great place to shoot raccoons.  Why E.M.C. should have and choose a postcard of Park Avenue in Guelph to arrange some 'coon hunting in Shedden is something likely now lost in the mists of time.  Nevertheless, I am glad that he did.  Also, it illustrates the fact that postcards were often used at the time to communicate quotidian messages over short distances, rather than to illustrate one's travels to people far away.
Posted by Cameron Shelley at 08:17